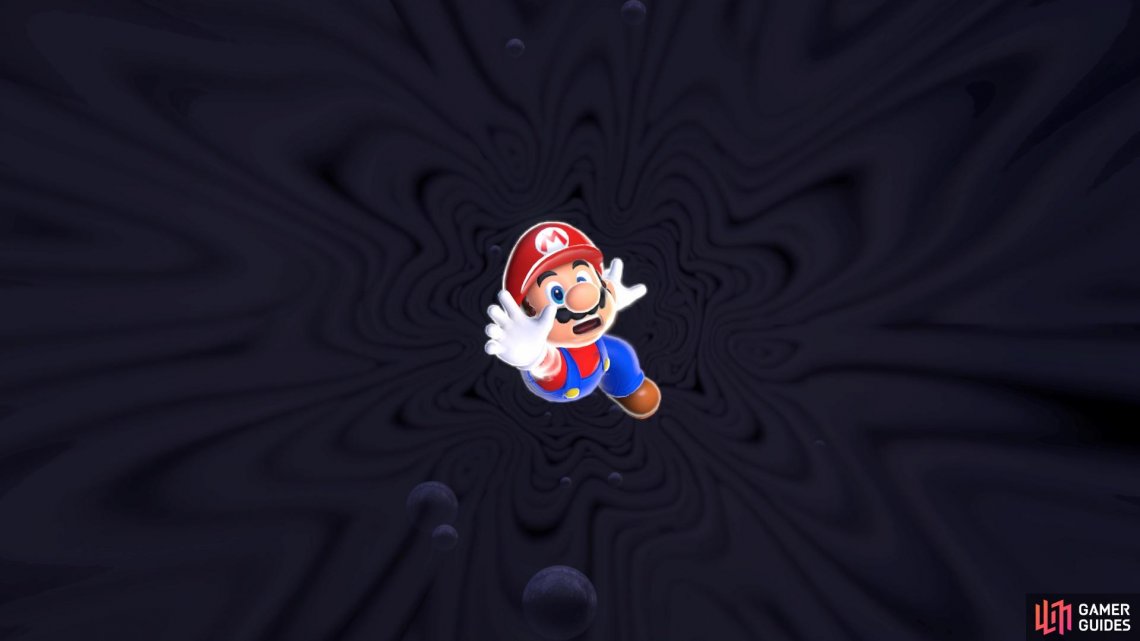 Upon picking this option on the title screen, you will witness Mario walking on a sunny day, until he encounters some goop on the ground. Mario will swiftly run after the trail of goop, where he’ll spot a familiar sign (fans of Mario Sunshine will recognize this). Before he has a chance to do anything, the goop turns into a portal and swallows him whole, depositing him in some unknown land. Mario lands, head first, inside some giant foot-shaped crater, where you will finally gain control of him yourself.

The first thing you should do upon gaining control of Mario is move around and get a feel for the controls. The right stick will move the camera, which will always be an important part of a 3D platformer. Both the A and B Buttons will perform a jump and if you’ve played previous 3D Mario games, you might be disappointed that there’s no double/triple jump. If you hold down the X or Y Button while moving Mario around with the left analog stick, then he will gradually move faster and into a sprint. Holding down the ZL or ZR Button will cause Mario to crouch, and if you’re not moving, jumping while doing this will cause Mario to do a crouching jump. 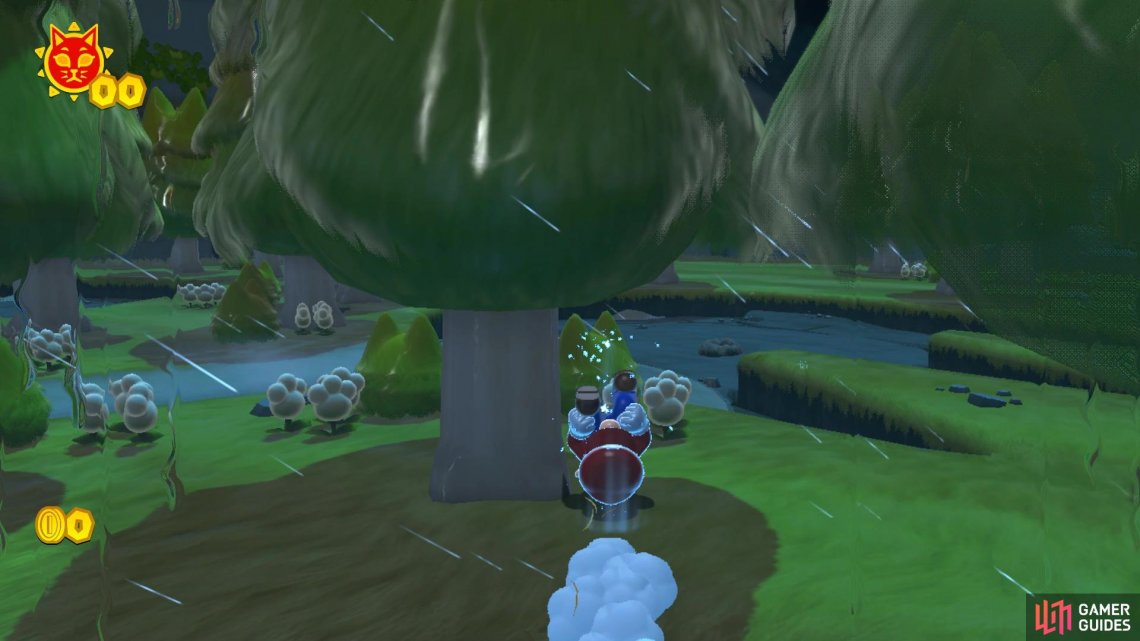 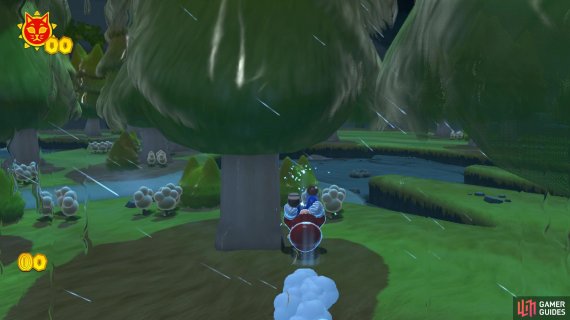 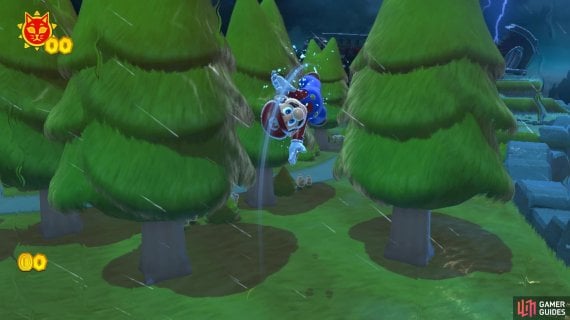 Use the start of the game to get used to the controls (left), as well as practice some of the more advanced maneuvers (right)

However, if you’re moving and crouch, then jump, Mario will perform a Long Jump. If you hold down the crouch button and Mario begins to shake, you can jump then to cause Mario to do a slightly higher than normal jump. Crouch and press either the Y or X button while not moving to cause Mario to roll. You can roll a little further if you move around while doing this. The last real maneuver for Mario involves running forward, then tilting the analog stick in the other direction while pressing the jump button at the same time, causing Mario to perform a Side Somersault.

To continue with the main walkthrough now, navigate yourself through the trees (which have cat ears by the way) and look for the hill on the one side. You should see some blocks there, with a familiar face on them, but ignore them for now, as you can’t do anything with them. Jump up to the deck of the ship and someone will appear, Fury Bowser. While he doesn’t actually come attack you directly, Bowser will shoot fireballs into the sky and have them drop down near your position. Also, as you cross the ship, large blocks will drop down and try to get in your way. 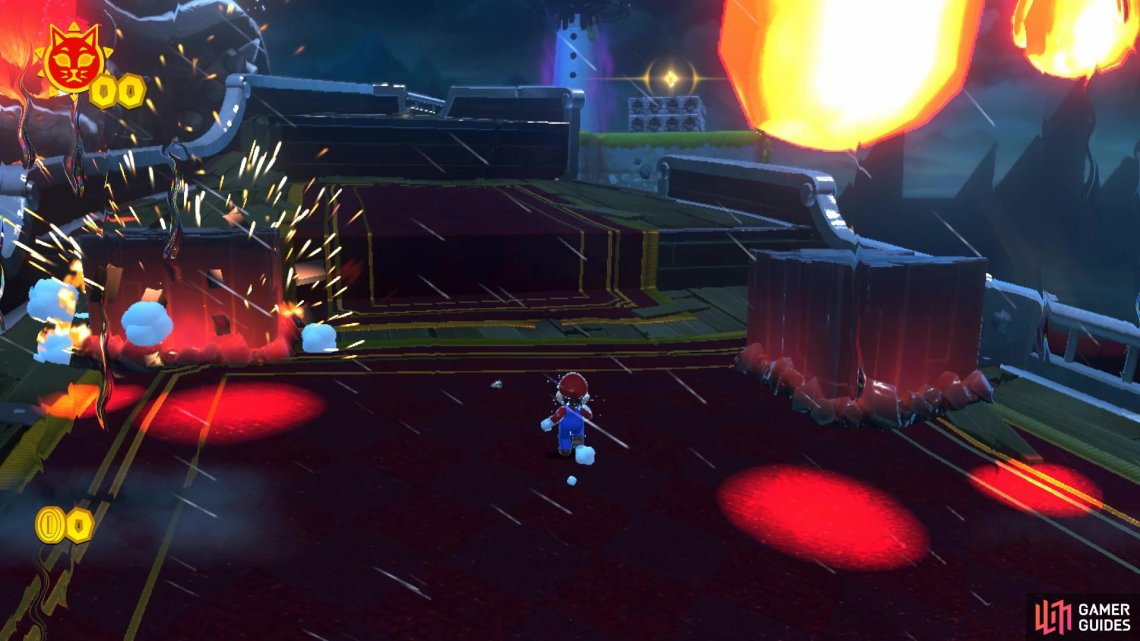 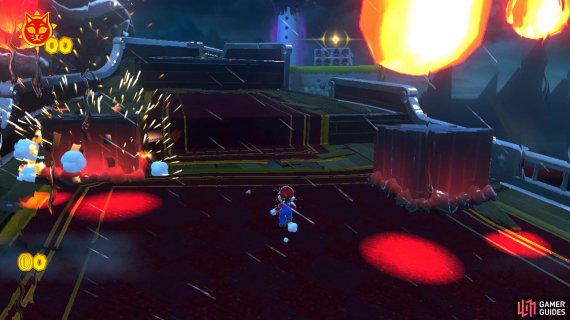 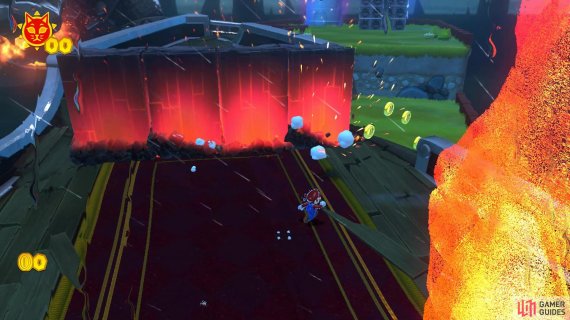 All of the stuff dropping has a telegraphed spot (left), You will be directed to the right of the ship’s bow (right)

As a quick note, Mario is in his powered up form here, as if he ate a Super Mushroom. If you somehow manage to get hit by a fireball, then he will shrink down into his smaller form. Get hit one more time and you will be sent back to the beginning, as well as lose any coins you may have found (you lose up to 50 each time you die). For now, just cross the ship, while avoiding the fireballs coming down from the sky. Upon returning the other side of the ship, some of those previously mentioned blocks will fall and bar the way to the bow of the ship, redirecting you to the little grassy area to the side.

Continue down here, climb the fallen blocks in this area, then you should see something shining on top of those blocks with Bowser’s visage. That is a Cat Shine, which is the main collectible here in Bowser’s Fury. Unfortunately, it’s a little bit out of reach, so move behind those blocks and Bowser will begin getting ready for an attack in the background. So, to quickly introduce things, those blocks with Bowser’s face on them are called Fury Blocks and in order to break them, you will need the help of Fury Bowser. You see, as you hide behind the Fury Blocks, Bowser will begin preparing a large fire breath attack, which will not only destroy the Fury Blocks, but also the blocks that fall from the sky.

Anyway, hide behind the Fury Blocks and have Bowser destroy them to reveal some ledges you can jump up and grab the Cat Shine. Doing this will cause the lighthouse to light up, causing Fury Bowser to go to sleep. A bunch of islands will come out of the water, then you will be free to explore the little area in front of you. There is a clear pipe at the bottom of the lighthouse, bringing you to the top, where you can Ground Pound (jump and press either ZL or ZR) the light at the top to reveal a Super Mushroom. Unlike Super Mario 3D World, where you can only store a single power-up for later use, Bowser’s Fury allows you to store multiple ones. 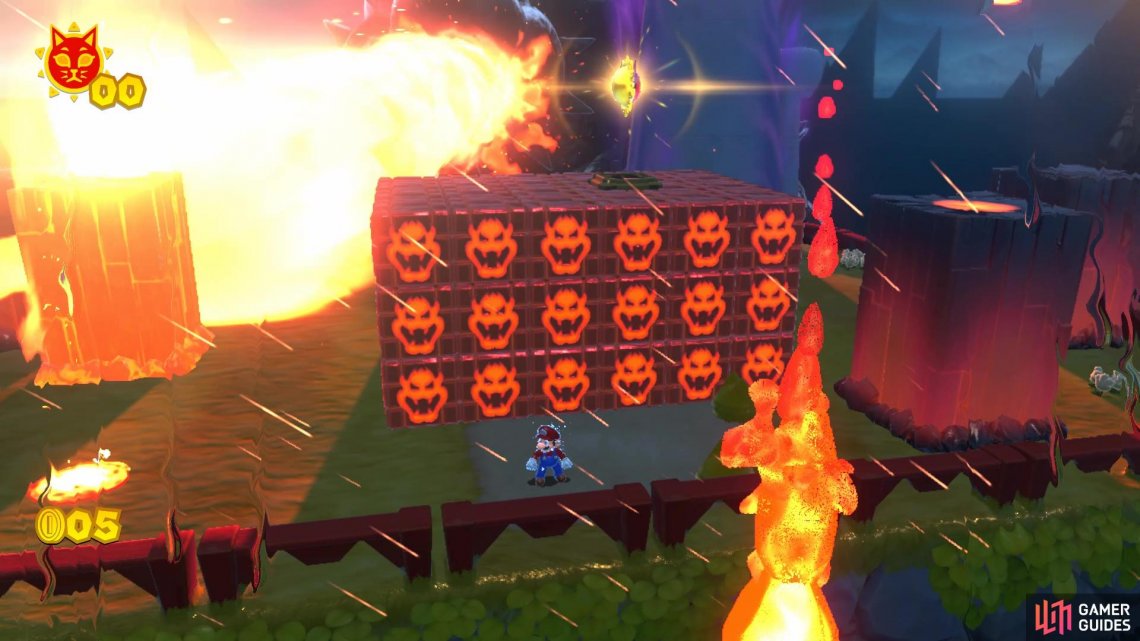 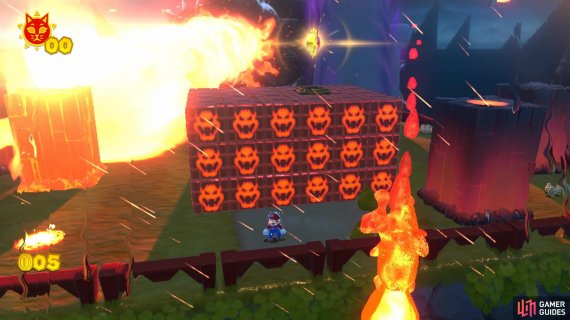 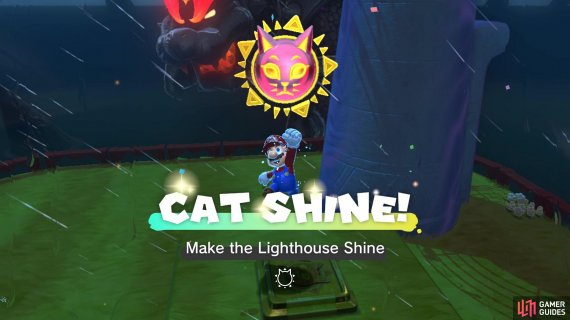 Hide behind something whenever Fury Bowser does his fire breath (left), Cat Shines are the main collectible in this add-on (right)

Drop down to the ground below and meet up with what appears to be Bowser Jr. He is really in a bad way if he’s asking Mario for help in turning his father back to normal. Thus will begin the actual walkthrough for Bowser’s Fury.

You won’t be able to get the remaining Cat Shines here on Fur Step Island, until the postgame.

It’s a me Mario! Welcome to our guide for the latest (and perhaps greatest) iteration of Nintendo’s flagship franchise. Join Mario, Luigi, Princess Peach and Toad as they travel across 12 large worlds, take on a plethora of new and returning enemies, play around with an array of power-ups and take on some frustratingly difficult challenges alone or co-operatively with a friend or three. From start to end we have you covered!

Our Super Mario 3D World guide covers all the most important elements of the game including: