Once you have the four essential builds - The Tank, The Caster, The Healer and The Bard - arguably the next best thing you can do is take a long, hard look at your party’s composition and create two characters that compliment your strengths and/or shore up your weaknesses.

What’s better than having one nearly untouchable tank? Having two! It might be redundant, but one character just isn’t always enough to occupy the hordes of enemies the game throws at you, especially in set-piece encounters where you can end up attacked from multiple directions. Animal companions will help hold the line in such cases, but it really behooves you to have a second character who can go toe-to-toe with enemies without immediately imploding. Also, as hard to hit as our original tank is, RNG does happen; sometimes the enemy will just get lucky, especially when your foes start getting more fond of debuffs. Blindness and flat-footedness are both chinks in our armor we have to be aware of, and sometimes just having a spare is the only reasonable answer. 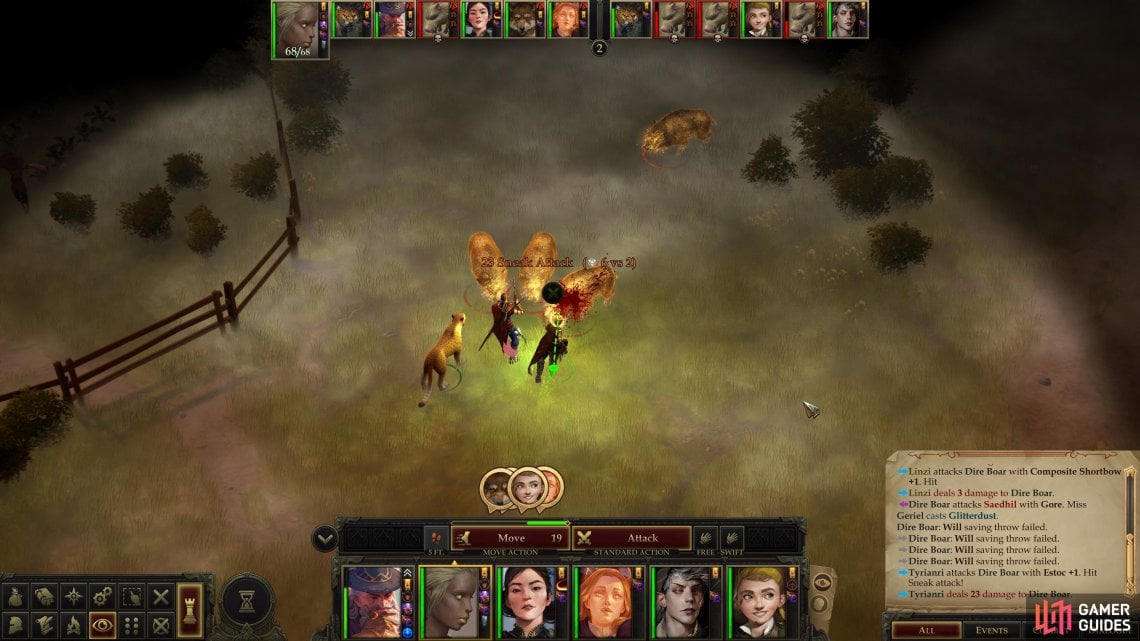 You can technically just clone the original tank (perhaps picking a slightly different weapon to focus in - Longswords and Scimitars are both good choices for the original Tank, so just make sure both are using different weapons), but why copy when we can iterate? Okay, so this tank will be somewhat similar to the original in that we’re going to make a Magus with a splash of Monk to make a high Armor Class character, but this will be a Strength build with slightly better offense (far better early on) at the cost of inferior defense.

Ultimately we’ll start out as a Monk (Scaled Fist) before splashing Alchemist (Vivisectionist), and at third level we’ll pick up Magus (Sword Saint) and spend the rest of our career in that class. This is somewhat more complicated than the other builds, but making two one-level dips on a Magus isn’t too much hassle. You’ll also want to make sure your race gives you a +2 bonus to Strength and Charisma for optimal performance - no other build places quite as strict demands on stat point allocation than the Off-Tank.

Monk (Scaled Fist): Lots of functional overlap here with The Tank, so read that entry for more details. Essentially, however, we’re splashing Monk for the Armor Class. Just one level in Monk (Scaled Fist) allows you to apply your Charisma modifier to your Armor Class, and it allows you to invest in “Crane Style”, which will further boost your Armor Class. All in all, this allows you to “Fight Defensively” with only a -2 penalty to Attack instead of -4 and gives you four points of Armor Class (+1 Dodge from Crane Style when “Fighting Defensively” and +3 from Charisma), not to mention the other gains “Fighting Defensively” will give you. One level is a small price to pay for these gains.

Alchemist (Vivisector): We’re dipping one level into this class, too, and in this case we’re doing it for the 1d6 Sneak Attack (you can pick the Accomplished Sneak Attacker feat for another 1d6 damage). Might not seem like much, but you should be flanking most of the time, so this is just free damage. You’ll also gain access to Mutagens, which you can use to give yourself a +4 Strength bonus and a +2 Natural Armor bonus for 10 minutes (albeit at the cost of a -2 Intelligence penalty). 10 minutes isn’t long, but it’s long enough for a few fights, making it a fine buff. You’ll also get a variety of Alchemist spells, but these will basically just amount to a few uses of True Strike in the long term. All in all, Vivisectionist is another obvious add that gives a significant benefit for even a one level dip.

Magus (Sword Saint): While this is a different subclass of Magus (Sword Saint instead of The Tank‘s Eldrich Scion), it functions fairly similarly. The Magus fights reasonably well, and can self-buff to make themselves nearly unhittable. You can also use a variety of Magus abilities (Spellstrike, Spell Combat, Arcane Weapon Enhancement and Arcane Accuracy) to boost your offense, which is always welcome, but the Sword Saint won’t really need to rely on touch attack spells for damage like the Eldritch Scion will.

While the playstyle is largely the same, there are some differences to keep in mind. First, the Sword Saint uses Intelligence to cast spells, and they learn spells more like a Wizard than a Sorcerer. You’ll get spells when you level up just like any spellcaster, but you can also copy spells from scrolls you find to permanently add them to your spellbook. These spells must be individually prepared and memorized - you don’t have free access to every spell you know, like the Sorcerer. So, you can learn more spells, but are more rigid in which of your known spells you can cast at any time. Your Intelligence will also influence a variety of Sword Saint class abilities with Canny Defense (dodge bonus to Armor Class equal to your Intelligence modifier) perhaps being the best of the bunch.

Ability Scores: No other build has been so demanding when it comes to stats as this one. Strength powers your melee offense, Dexterity and Charisma will boost your Armor Class, but you also need Intelligence for the Magus spells. To help meet our stat demands, pick the Aasimar (Angelkin) for a +2 bonus to Strength and Charisma with no downsides. We’ll top out both stats at 16, which perhaps isn’t ideal, but it’s serviceable enough. Intelligence needs to be 15 so we can boost it to 16 with our bonus attribute point gained every fourth level, as we’ll need a score of 16 to cast 6th-level spells. Of course, this isn’t until you hit 16th-level as a Magus, or 18th-level overall, so drop your first two bonus points (4th and 8th level) into Strength. Wisdom is a dump stat and Constitution… well, 12 is the best we can do.

Race: We suggest Aasimar (Angelkin) for this build, as it has the stats we want (Strength and Charisma) and allows us to pick the “Wings” feat much later in the game. It’ll take a while, but that +3 Armor Class boost will help close the gap between the Off-Tank and our The Tank. There might be some Tiefling variants that are passable, but there’s no good reason to make compromises here.

Alignment: Alignment matters for the Off-Tank for the same reason it matters for the The Tank - Monk robes. Obviously both your Monks can’t wear the same robes, but there’s a Lawful Neutral set of robes which, while inferior in terms of defense and only obtained very late into the game, are still good enough for us to build our alignment around it. Pick Lawful Neutral and you’re good to go.

Skills: You’ll want three ranks of Mobility to boost your “Fighting Defensively” bonus, but other than that, nothing is really required. Persuasion is also nice for Dazzling Display, but this is a long time in coming and your protagonist already should have it covered. After those two skills, you’ve still got lots of options, as this class has high Intelligence. Between your other characters - especially The Bard - you should have enough to cover almost everything, but this particular build excels in Athletics, Trickery, Stealth, Knowledge (Arcana) and Knowledge (World).

Feats: Start out with the usual - “Dodge” and “Crane Style” will both boost your Armor Class. After that, you won’t make any picks until you hit third level (Magus), at which time you should pick your Chosen Weapon (Falcata, Estoc, Longsword and Scimitar are all good choices - just don’t overlap with your Tank.

Starting Spells: This character actually has two spell-casting classes, but the Vivisectionist’s spells will be of very limited utility, as you won’t be getting any more levels in that class. We picked Shield, True Strike, Cure Light Wounds, Reduce Person, Enlarge Person and Expeditious Retreat, although the durations/effects of most of these will be gimped by our limited level investment… save True Strike, which will probably be the spell we use most often.

As for Magus spells, our picks as similar to The Tank’s: Shield will give you a worthy boost to Armor Class, and Shocking Grasp will give you a taste of what this class can do, offensively, both being fine starting spells. You won’t be getting these until you hit third level, so it’ll take a while until these spells are comparable to what The Tank can do.