A component quest related to the larger Troll Trouble questline, this won’t appear in your journal until you stumble upon it. Assuming you’re here after checking out the Troll Trouble - Events Overview page, you’ll know this pops up after the Troll Invasion event appears, roughly two weeks before An Ancient Curse expires. For reference, if you’re following the walkthrough chronologically, we’ll be dealing with this shortly after An Ancient Curse - Part 2 starts as part of our journey south through previously-explored areas leading up to the Swamp Witch’s Hut Expedition.

On the way south you should pass through and explore (or rather, re-explore) the A Ford Across the Skunk River and Lone House areas, as both will contain new encounters now that the Troll Invasion event has occurred. After those two areas are cleared, the next stop is the Ruined Watchtower, which should also have new encounters in it. 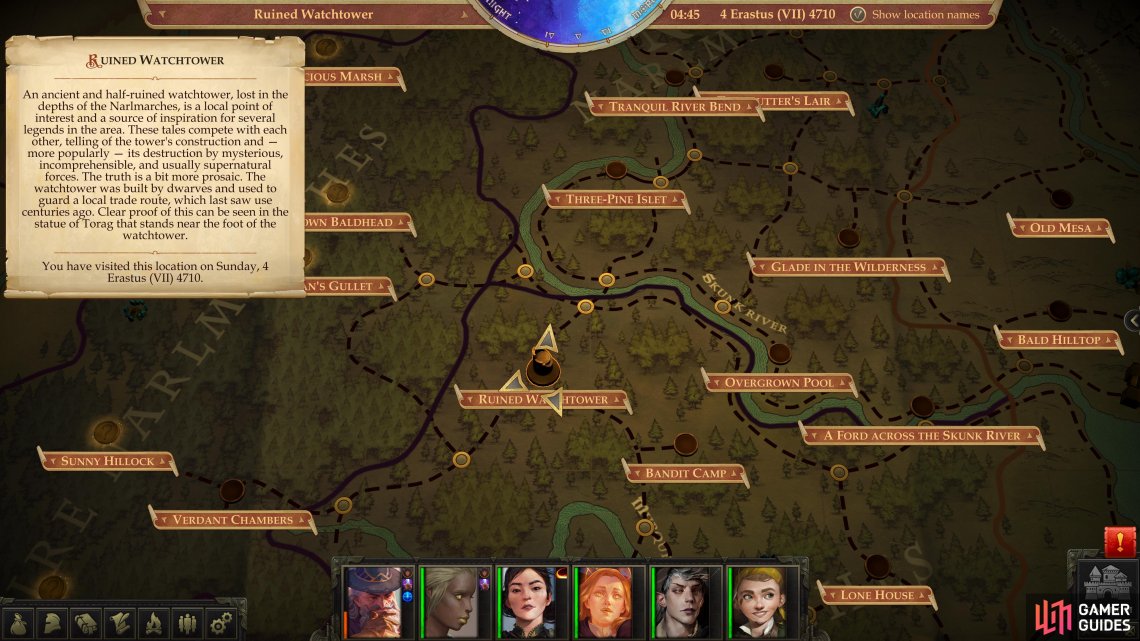 From the Lone House area you’ll want to head: 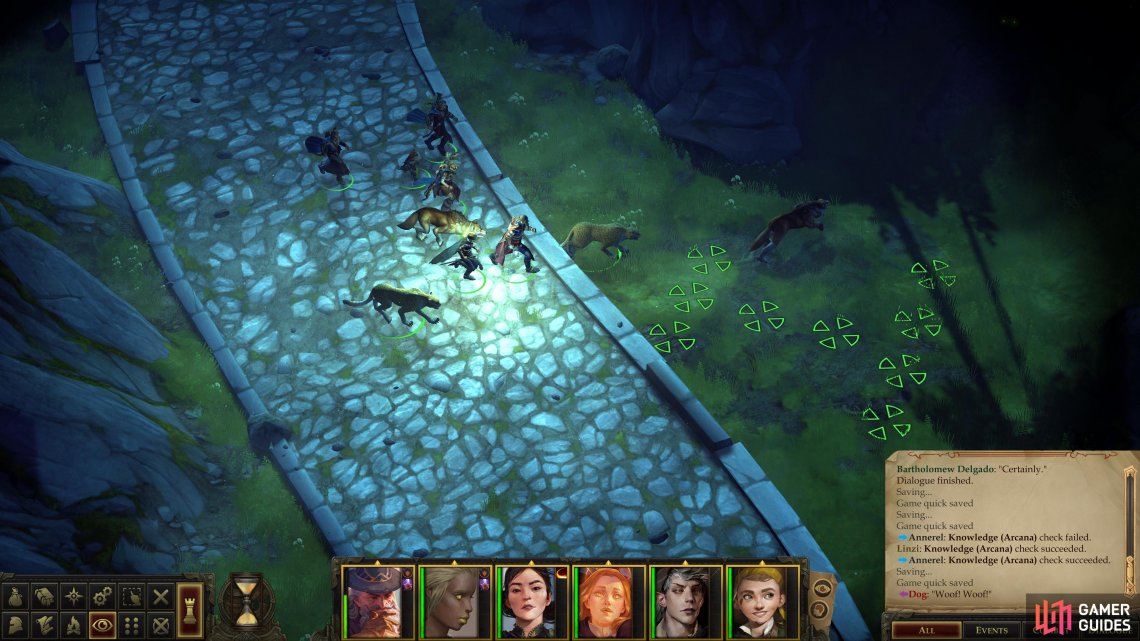 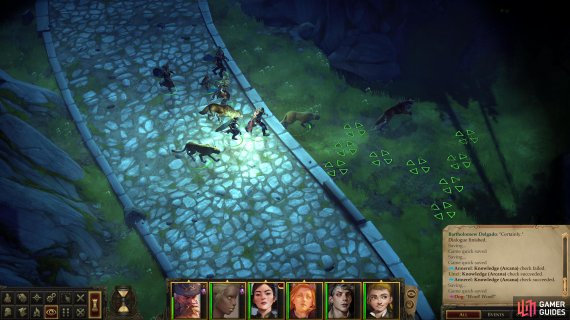 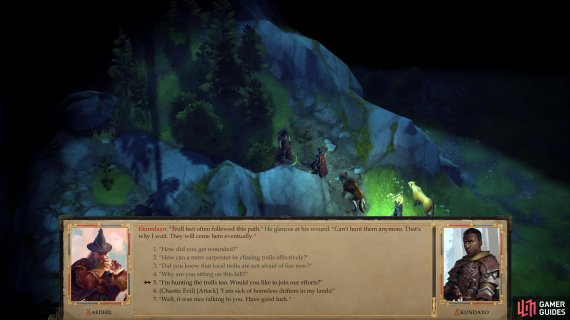 Follow the wolf and it’ll lead you to Ekundayo, (left), who can be induced to join your party if you leverage your mutual interest in killing trolls. (right)

Once again, if you haven’t been here yet, refer to the Ruined Watchtower page for the general encounters that can be found here. At the very least, be sure to get your hands on the Trollreaper weapon, as its unique properties will be invaluable for the upcoming battles.

As for the events related to the quest Troll Trouble, follow the road that bisects the area until you find a dog. This dog will bark at you before running to the southeast, and will periodically stop so you can keep up. Take the hint and follow the dog as it leads you off the road and up a hill to the east, ultimately stopping at a man named Ekundayo.

Talk to this Ekundayo and pick whatever dialogue options you wish (provided you avoid the nearly universal [Chaotic Evil] option to just kill him) to get him to reveal he’s hunting trolls, specifically a specimen named Kargadd. Perhaps his ultimate goal will intersect with yours some day, but for now he seems content to kill any trolls he finds, and you’ve got plenty of trolls in need of killing. This shared goal should make you natural allies, so exhaust his dialogue options to learn more about him and finish with “I’m hunting the trolls too. Would you like to join our efforts?” to get Ekundayo to join your party.

Not only will you get yourself a stellar archer (fortunately you get to level him up, so you can spec him into whatever skills you need), but he’ll mark “all the places where troll feet tread the land”, but specifically some Dwarven Ruins. Unfortunately, he’s not at full strength when he joins, and he does make a request: he’s been waiting for some trolls, and he wishes to finish his hunt. Either coax another answer out of him (you can just wait until the next time you’re in Tuskdale to talk all you wish), send him back to the capital, or wait with him for the trolls to appear. In the latter case, note that you do not actually have to accept him into your party, which effectively sends him to the capital while also indulging his desire to wait for the trolls. 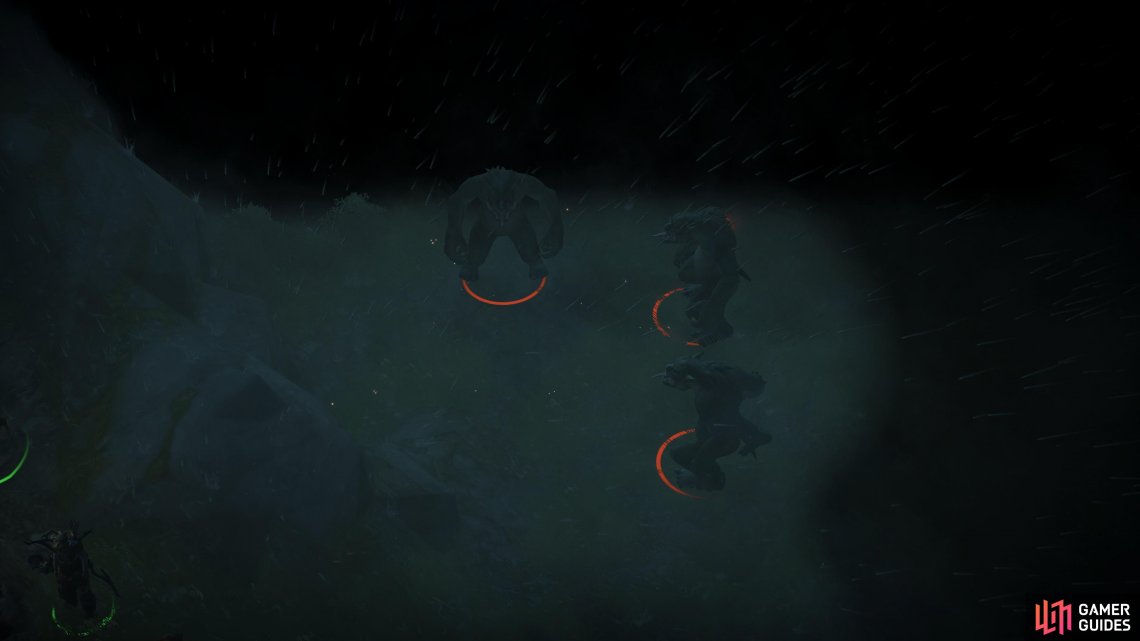 (1 of 2) Wait for the trolls Ekundayo was stalking to arrive, 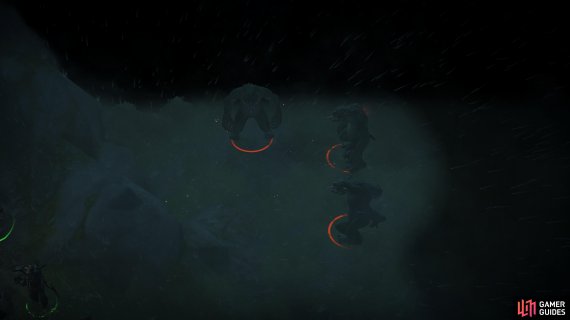 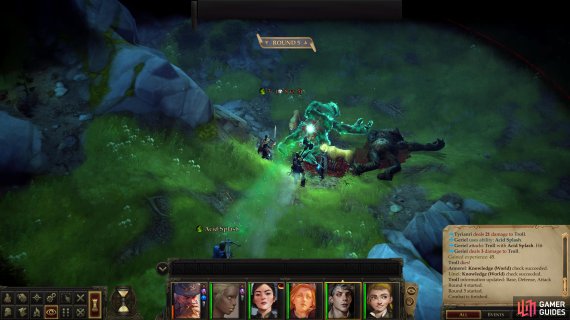 Wait for the trolls Ekundayo was stalking to arrive, (left), then ambush and exterminate them. (right)

If you do wait for the trolls, a few hours will pass in-game, after which two Trolls and a Branded Troll will show up downhill from you. Merely head down and slaughter them to appease Ekundayo.

With that, you’re done in this area. More importantly, you’ve learned of a place of interest - the Dwarven Ruins far to the south. This is our ultimate objective, however, it’s a good way off and there’s a lot of areas in the way that are also worth exploring. Furthermore, if you’re following the walkthrough chronologically, we’ve plenty of time before completing Troll Trouble becomes imperative. All that being the case, we’re going to launch another expedition to clear these areas on our way to the Dwarven Ruins.

The specifics of this expedition will be covered in the Swamp Witch’s Hut Expedition Overview page, and it’s highly recommended you undertake this expedition en route to the Dwarven Ruins.