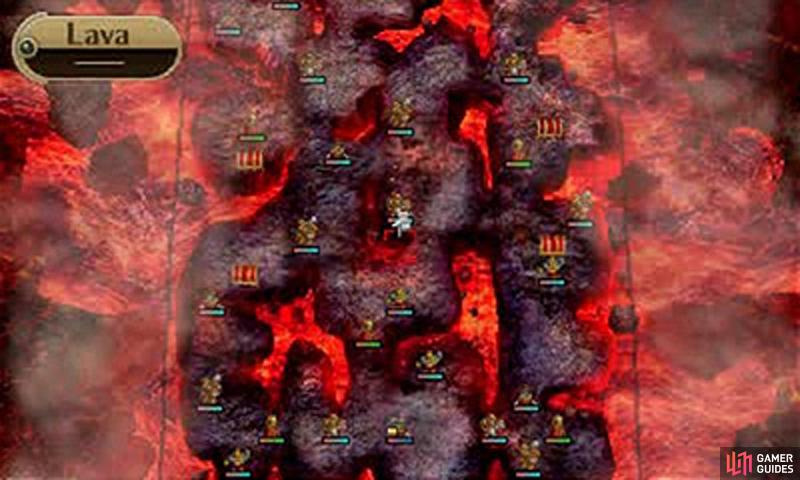 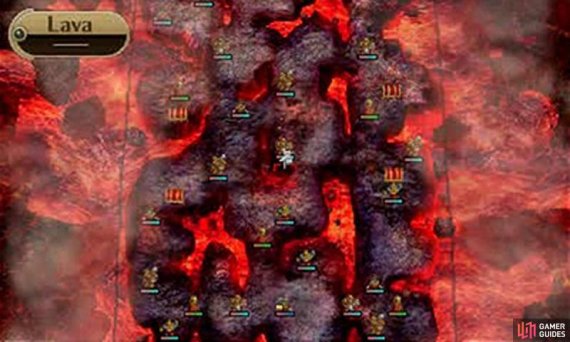 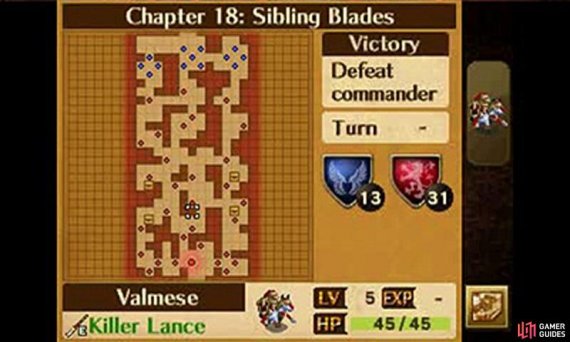 Note: Lava will start to cover certain land areas as time goes on. Be sure to move swiftly to the boss while covering the chests on the map as well. There will be some small bits of landmass left over, but certainly not enough for all your units.

By turn 7, the Bullion (M) chest will be gone, the Energy Drop and Rescue at Turn 10, and the Second Seal at Turn 11. If you really want these items, be sure to rush to them before those turns. If you do not make it, these items are all available at stores, so do not prioritize them too much.

The map is very long, and you have to race against time before all the land is swallowed up by the lava. You should rush the boss as quick as you can or risk losing your units to the burn. The lava zones are opposite of each other.

You will notice on Turn 1, the top left and bottom right are gone. Turn 2 will see the bottom and top middle gone. Then turn 3 will see the top right and bottom left gone. You will see it goes in order, weaving until both sides meet at the middle.

There will be a “safe zone” near the lower middle area, if you start to run out of room; placing your units here would be best.

Be wary of the flying units on this level, as they won’t be limited like most of your units will be. There are plenty of Warriors and Sages that will get in your way as well that you should be wary off, and will need a well balanced team to plow through them.

Any units with Galeforce should run as far ahead as they can to clear the way as another team follows up behind to sweep.

Note: Sidequest 17 unlocks after this chapter.

Did you know: The Demon’s Ingle is a reference to the Dark God Duma from Fire Emblem: Gaiden. It’s more obvious in the Japanese version, where it was “Duma’s Entrails”.