This section shows you how to get all the characters (including child characters), their stats, opinions, etc!

Caution: Spoilers may be abound! Please take heed before proceeding.

An example of a character profile is shown below:

Class: Initial Class: The class they are when you get them.

When/How: How to recruit!

Character Bio: The character’s description as it appears in the Barracks.

Other Classes: What they can become (includes both upgrading and reclassing)

Support: Who they can support (Anyone with S is a marriage candidate, A/S means max support level.)

Note: Your own character can support everyone so will not appear on every list to avoid redundancy.

Generation I units can support whoever their children are up to A level, and they will not appear on the lists to avoid clutter. Instead, refer to the “Children/Possible Children” list directly below. The same applies to Generation II units and their parents/siblings. 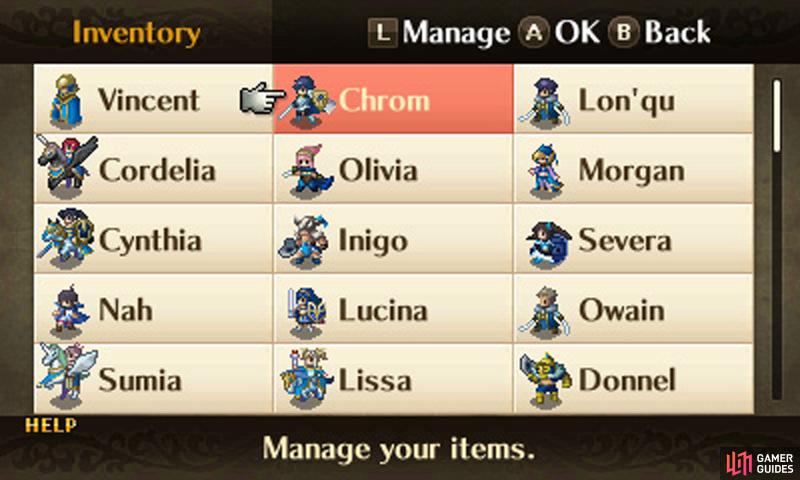 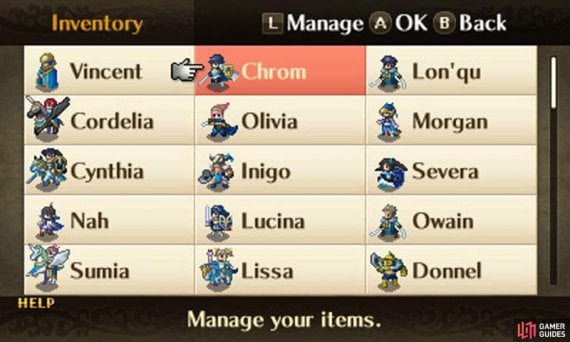 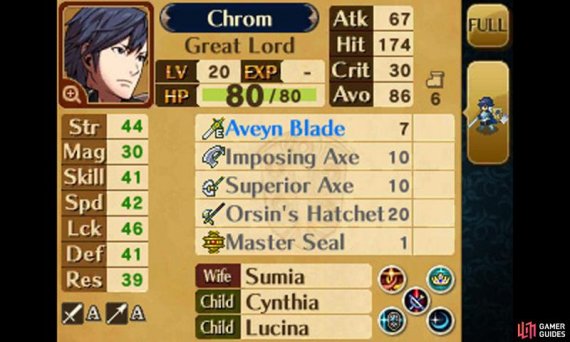 It’s all about the characters now! (left), (right)

Children: Who the child will be if Generation I if mother, and who the possible children can be if father. Exceptions exist.

Note Morgan will be anyone’s son/daughter depending on your Avatar’s gender, and will not be listed under any of the characters aside from your Avatar.

Children/Possible Children: For Generation I units. This lists the children one can have depending on relationships.

Family: For Generation II units. Who the mother and father (and possible siblings) are depending on relationships.

Growth Rates: ** The probability of each of the character’s key stats increasing during a Level Up. Graded from E (bad) to A (excellent).

Opinion: My opinion of them (How they were as a unit, personality, etc). This obviously does not mean “Use or don’t use” said units, as it is just experience in one playthrough, and the more dedicated could probably provide better explanations/suggestions.

Though in the end I like to say it comes down to your own preference, especially in this game where one can reclass units constantly and max their stats out. I suppose some skills are still limited to certain characters, though.

Remember: Opinion is exactly that. Like a game review, or like what any random person says – do not take these as the absolute final word.

A few notes about the Generation I or “parent” characters.

Both of the parents will pass down their class options (all of them, gender permitting), skills (their last equipped skill), gained stats (a fraction) and growths (a fraction) to their children. 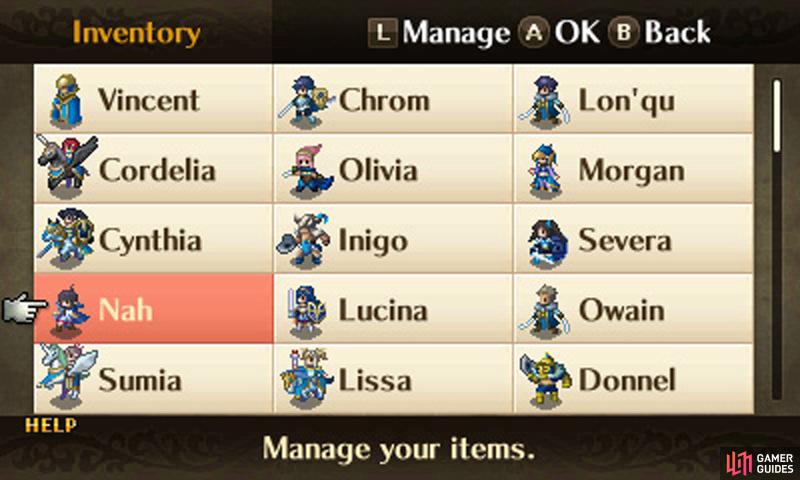 (1 of 2) You can have a lot of fun “breeding” for different hair colours, never mind stats! 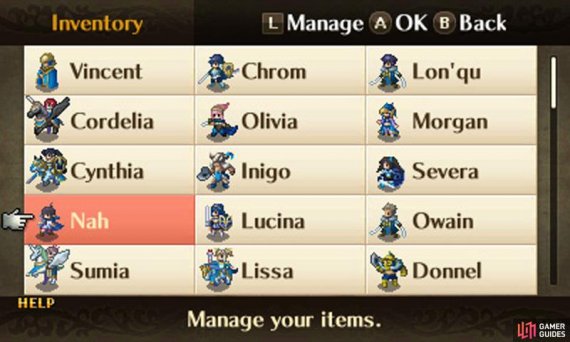 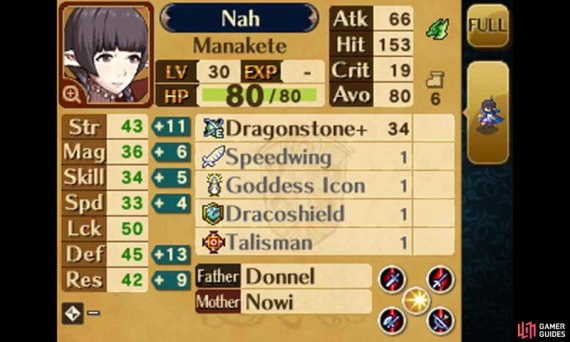 You can have a lot of fun “breeding” for different hair colours, never mind stats! (left), (right)

A few notes about the Generation II or “children” characters.

All Generation II units will have A supports with their mother and whoever their father is. As such, all possible fathers are not listed at the moment.

Alternate classes (the ones units don’t start off as) are inherited from the parents’ alternate classes. Your Avatar’s children will have all classes avaliable for their gender unlocked.

For now, the sections do not contain all possible classes from all fathers. Check the father’s class options to determine what the child will have in addition of what they inherit from their mother (already shown).

Skills are passed down to children from parents. Normally, the children will inherit the last equipped skill from both of their parents. DLC skills cannot be inherited.

Base stats and growths and such vary greatly pending on parents!

Sidequests for the children unlock the moment an S rank is reached between parents and once Chapter 13 has been cleared.

Morgan and Lucina have varying supports. For example: If you are Lucina’s parent, there will be a separate branch of supports than if you were not. Likewise, Morgan will have a different branch of supports if related to a character. If Chrom marries another female aside from your Avatar, that child will be related to Lucina, etc.

Generation II can marry other Generation II except those who may be siblings (such as if Chrom marries Olivia, then Inigo cannot marry Lucina). Unlike Generation I, no children will be produced, with the exception of your Avatar.