This quest begins immediately after Ameridan’s End. Leave the Old Temple and interact with Ameridan’s memory by holding the orb floating in the air. This unlocks the side quest Where Once We Walked, which is a simple exploration quest. When you’re ready to fight Hakkon, you’ll find the dragon on the southernmost shore of Frostback Basin.

As you approach Hakkon you will be attacked by a number of Gibbering Horrors. These have very little health and can be dealt with easily, but if you ignore them for too long they can inflict significant damage. 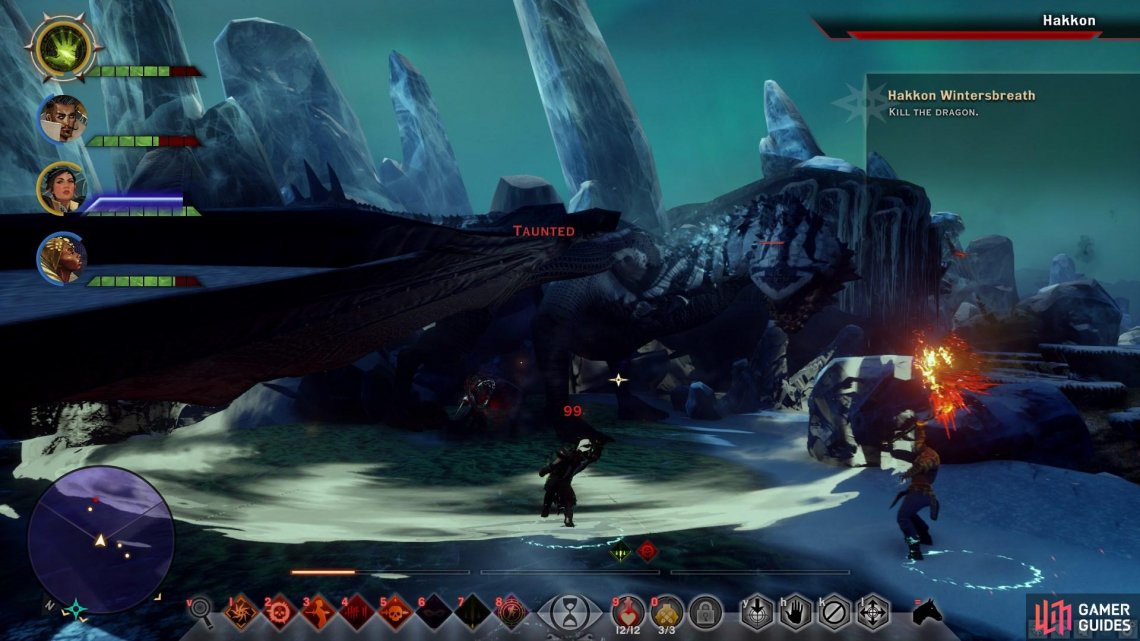 (1 of 6) Hakkon will sometimes use Cyclone to draw you and allies in. Try to run away from him if you’re a mage.

As with other High Dragons, Hakkon is able to use elemental breath to fire ranged damage and create a cyclone with his wings to pull you close to him. He can also stun by screaching, and will use powerful sweeping attacks with his claws. See the screenshots below for indicators of when these attacks are imminent.

At 25% health Hakkon will fly in the air and circle the group before inflicting damage frost breath. You can negate much of this by casting barriers as he approaches. At 50% health he will fly in the air again and do another round of ice breath. He will then land on the central platform before summoning another group of Gibbering Horrors.

Once you’ve killed the Gibbering Horrors, Hakkon will return to the ice. The same battle patterns will reoccur until Hakkon is brought down to 25% health, at which point another wave of Gibbering Horrors will spawn. Deal with them and then focus again on Hakkon. Once he reaches the ground, he won’t fly again. At the end of the battle a cutscene will follow. Be sure to loot the dragon when it’s over.