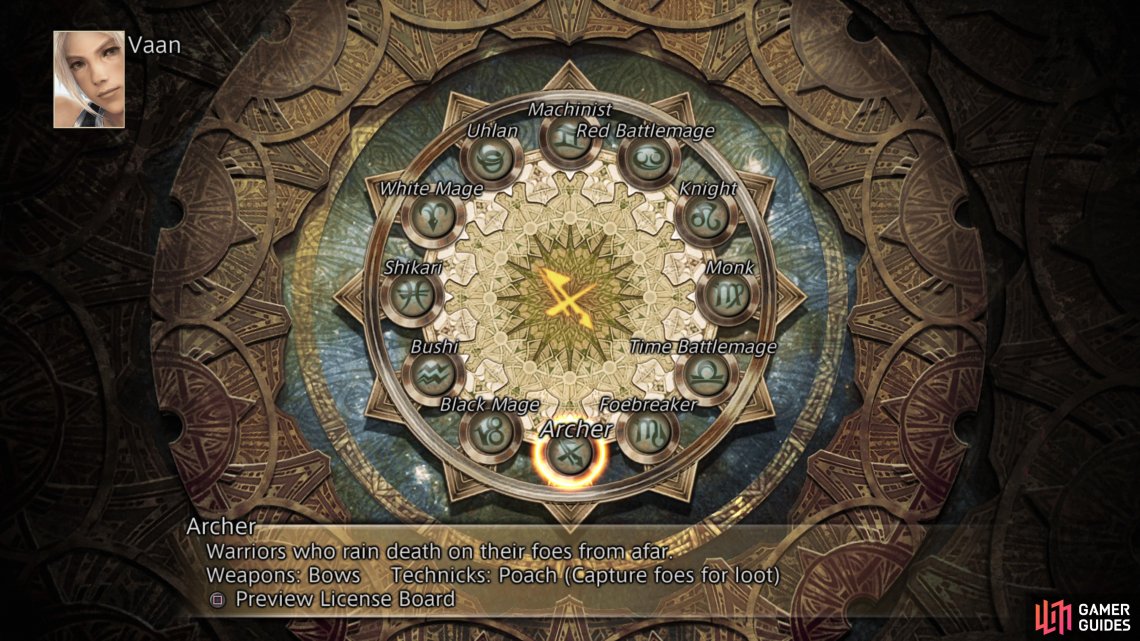 The Archer is very much a mixed bag, and that’s being generous. As a stand-alone job they have little to recommend them aside from a wide variety of technicks, all the item lores, access to Bow weapons, and three ranks of Swiftness. Their HP are moderate, which is fine since they have access to all the Light Armor (which will boost HP), and their ranged weapons should keep them out of trouble. They can also get the White Magick 4 license (Cura and Raise) if you invest in the 50 LP Quickening. A fine support character, but nothing to really go crazy over. Their poor selection of Battle Lore (x2) and Magick Lore (x1) licenses ensures they’ll never be outstanding from a DPS perspective.

In The Zodiac Age, however, this makes them a fine secondary job. Just pick a job with good access to other weapons and magicks and don’t pick another job that has plenty of item lores and technicks (Machinist and Shikari) and they’ll mix fine. Of all the possible combinations, however, the Red Battlemage/Archer has the best synergy, as not only will this add a great deal of much needed Magick Lore (and a bit of Battle Lore), but it’ll give the Red Battlemage some much needed Swiftness. Better yet, you can purchase the LP 125 Quickening on the Red Battlemage License Board and use that to island hop back to the Archer Board and bypass the Famfrit Esper Gate, scoring the HP 10 license as well, adding a cool 825 HP to the mix. In fact, this combo entirely voids the need for an otherwise attractive-seeming Famfrit allocation (HP 10 - 11, Battle Lore x2), which is better used elsewhere.

While it might seems like a somewhat clumsy synergy that under-utilizes the Archer’s melee prowess… well, you’re right, to a degree. But most jobs with more Physical Lores will excel without adding the Archer, and there’s a good reason to sacrifice the Archer’s melee contribution: it’s simply a more powerful build to focus on Magick Power. There’s another hidden bit of synergy between these two classes in this regard, as well, as the Burning Bow - the 6th most powerful Bow in the game, with a passable 79 Attack Power - augments Fire damage. Since the Red Battlemage is the only job that gets access to the Ardor magick, the most powerful Fire spell in the game, this is a match made in gaming heaven, as you can be a competent, if not stellar Archer with pretty damn good HP, who can also utilize most technicks and low-to-mid-tier Black Magicks, White Magicks and all Green Magicks and Arcane Magicks. It’s the ultimate support character whose utility never really wears off due to Ardor’s potent punch.