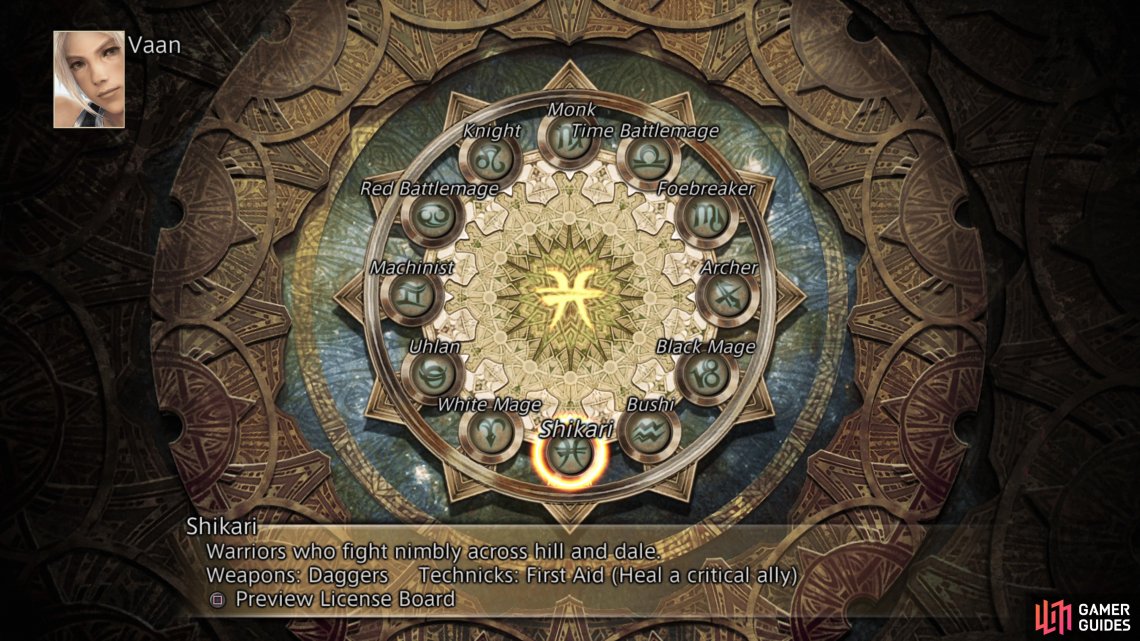 The Shikari, or “hunter”, is a Dagger-wielding, Light Armor wearing melee fighter who eventually gains access to Ninja Swords. They’re not quite up to snuff as a front-line warrior, however, as they suffer from a conspicuous lack of Battle Lores (6) and access to Heavy Armor and high-tier Shields. Their HP are quite good, however, since they can purchase HP 1 - 10 licenses (2,100 HP), and this will likely be further enhanced by the Light Armor they wear. Other things going for them include all three Potion Lore and Remedy Lore licenses, the Telekinesis technick, three ranks of Swiftness and the aforementioned use of Ninja Swords.

Ninja Swords are universally high damage weapons with high combo rates, many of which also apply status effects on hit. Simply put, they’re great weapons and beg to be paired with Genji Gloves - a license for which the Shikari doesn’t have direct access to on its own. It should also be noted that the Shikari is the only job which has licenses behind all four Quickening Gates, all of which are Ninja Sword licenses. It doesn’t matter so much which ones you get, so long as one of them is the Yagyu Darkblade & Mesa, two of the most powerful Ninja Swords, which are behind the LP 125 Quickening license.

Given all that info, it should be easy to narrow down criteria by which to select a good companion job for the Shikari. Heavy Armor or Mystic Armor will both boost damage, although Heavy Armor will increase it universally and Mystic Armor will allow the Shikari to use Black Robes (boosts Dark elemental damage by 50%) and the Yagyu Darkblade (Dark elemental Ninja Sword). Ideally the other job will have more Battle Lores to further boost damage, and bonus points for pairing Shikari with a job that needs Swiftness ranks.

Given those goals, three excellent possibilities emerge: Foebreaker/Shikari, Bushi/Shikari, and White Mage/Shikari. The last might sound the most bizarre, but it’s based on a simple premise: the Shikari has access to Daggers, one of which, the Main Gauche, has an incredibly high Evade rate. Combined with a shield and you can make your White Mage quite tanky, indeed, and this does also meet the requirements of furnishing the Shikari with Mystic Armor, as well as giving the White Mage more HP and three ranks of Swiftness. On the other hand, this might be trying to do too much at once, as you can hardly expect to be a good tank, damage-dealer, and healer all at once. Unless you’re a Knight, anyways. Plus, a lot of late-game bosses and optional enemies are able to ignore evasion, so a shield/Main Gauche combo will be useless.

Bushi/Shikari is the previously mentioned ninjamurai who can also utilize the Yagyu Darkblade/Black Robes combo, but it is somewhat of a waste doubling up their Swiftness, and the HP and Battle Lore differences between the two are marginal. This leaves Foebreaker/Shikari, which have the same HP, gives the Shikari more Battle Lores, a variety of useful technicks (Addle, Expose, Shear and Wither), and Heavy Armor, while the Shikari makes up for the Foebreaker’s lack of Swiftness ranks. Both of these jobs have access to the Genji Armor license, too, which will help turn the Shikari into a whirlwind of destruction. If you went with a Knight/Bushi and a White Mage/Machinist, the decision here is easy, and frankly, given other possible mixes, Foebreaker/Shikari is probably the best possible option, all things considered.