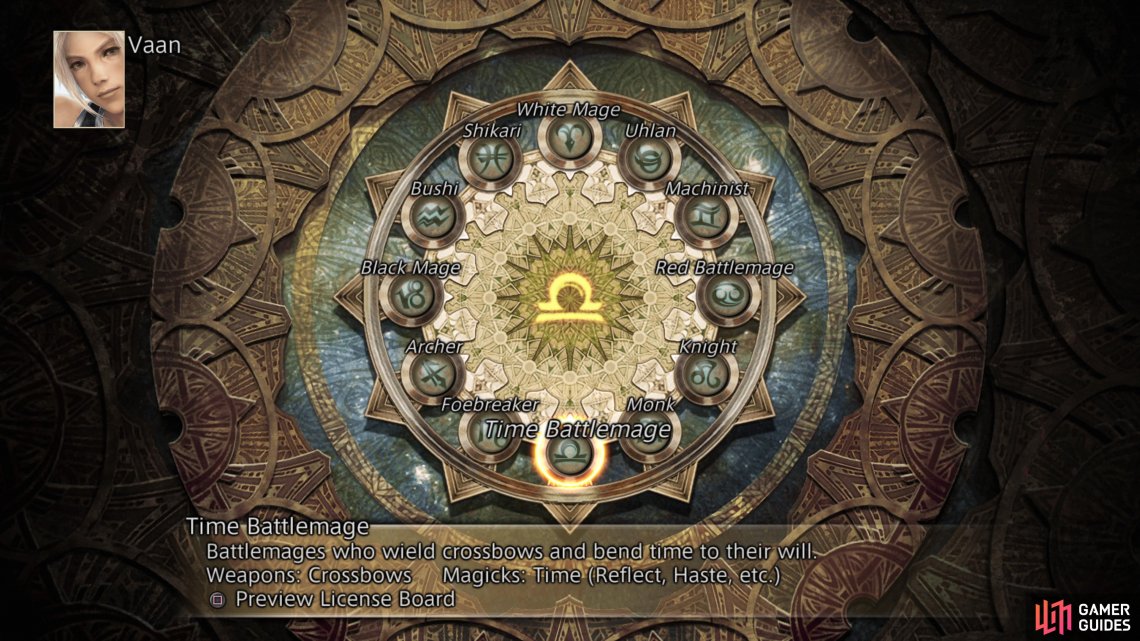 The Black Mage is the damage-dealer, the White Mage is the healer, the Red Battlemage is the jack-of-all-trades, and the Time Battlemage is the ultimate support mage. As such, they tend to focus on buff and debuffs, boasting incredibly useful magicks like Haste, Slow, Immobilize, Reflect, Disable, Stop, Float and Berserk, among others. Since most of their spells don’t deal with damage (either healing it or dealing it) or deal set amounts of damage (like with Gravity magicks), Magick Power isn’t as important for them, which is fair enough, since they oddly use Heavy Armor instead of Mystic Armor. In addition to Time Magicks, they, like every other mage, have access to all three Green Magicks licenses, which will give them access to Decoy and Bubble, which can increase their survivability a good bit. They also have access to Crossbows - uniquely unimpressive weapons, but at least they’re ranged - as well as all three ranks of Swiftness.

On their own, they’re not that special, especially since the Machinist can gain most of their best spells. They do, however, have a respectable number of Battle Lores (9) and Magick Lores (9), meaning there’s a good chance they’ll be a boon to the damage-dealing potential of other jobs. Also, considering their Heavy Armor and Swiftness, they might seem like a good mix with another sort of mage, but one should be wary of the lack of HP such a resulting combination may have, as the Time Battlemage only brings an atrocious 450 HP to the table. This being the case, the Time Battlemage really, really begs to be paired with a sturdier job. Frankly, the best asset the Time Battlemage has are its Time Magicks, and these should really be the selling point (along with Swiftness, if possible) for what this job ends up paired with.