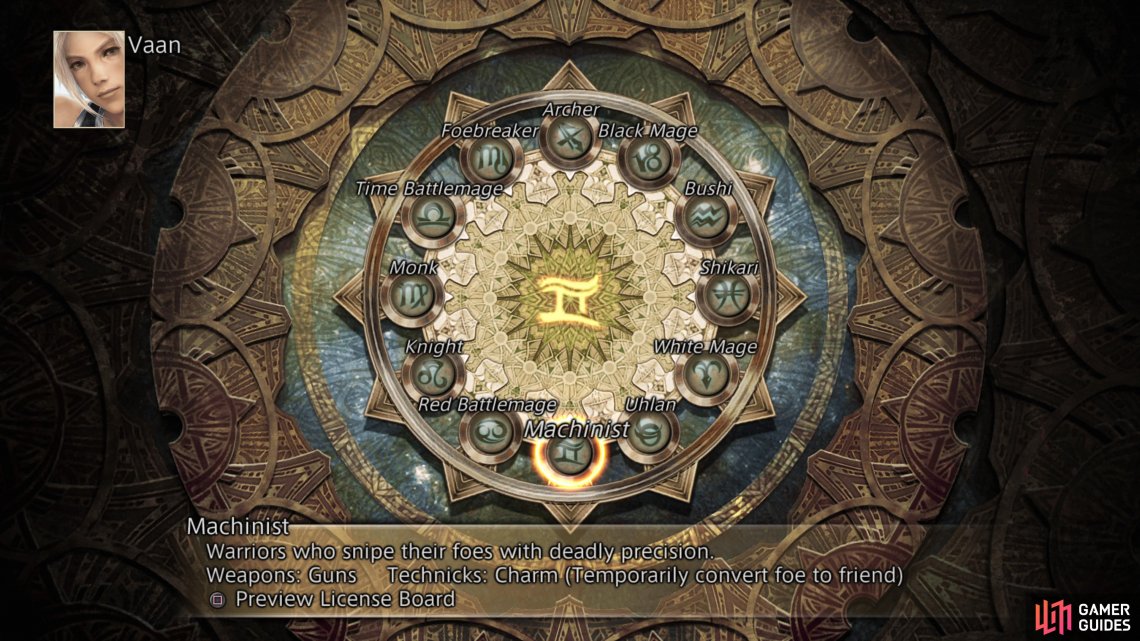 The Machinist is the job for technophiles, making use of Guns and Hand-Bombs to provide supplemental, ranged, combat support, much like the Archer. Just by looking at what this class offers, it should be readily apparent that as a stand-alone class, it leaves much to be desired, but it makes a fine secondary job. Its HP licenses on are par with the Archer, it gets more Battle and Magick Lores, has three ranks of Swiftness and a variety of technicks and item lores. The damage of its key weapons, Guns, aren’t affected by any attributes, but also ignore defense, and are hence capable of dealing reliable - if not impressive - damage. Their Light Armor leaves something to be desired, however.

While almost any class can potentially benefit from being paired with a Machinist, its greatest single benefit are probably the licenses locked behind the Famfrit Esper Gate, which include Time Magicks 8 - 10. The real winner magick here is Hastega, without downplaying other goodies like Reflectga and Slowga, and these few spells here are a great boon to any job… save, obviously, the Time Battlemage, which can be safely eliminated from consideration. Since these Time Magicks aren’t terribly reliant on your Magick Power, there’s no real need to pair Machinist with a mage, but given the fact that Guns don’t require Strength, and the fact that the Machinist will give whatever mage class it’s paired with more HP, technicks, and Swiftness, it’s not a bad idea, either. Mostly, however, you’ll come to this decision via a process of elimination, as better pairings (Knight/Bushi, Black Mage/Monk, Red Battlemage/Archer) narrow the field considerably.

Out of what’s left, White Mage/Machinist, Foebreaker/Machinist and Uhlan/Machinist are all fine choices, as the White Mage could really use the HP, Swiftness, and use of Guns, while the Foebreaker and Uhlan will mostly benefit from Swiftness, technicks and item lores. They will all also make great use of the Time Magicks, however, so it’s really a choice of whether you want a Foebreaker or Uhlan with a little extra utility, or a White Mage that serves as the ultimate support/healer.