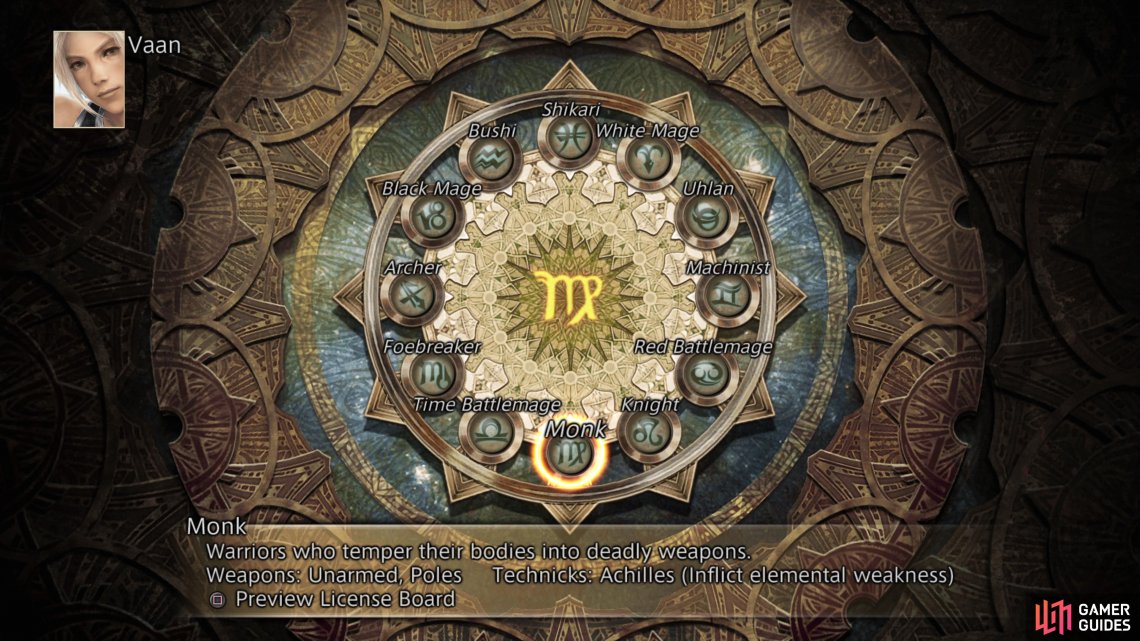 At a glance, the Monk doesn’t seem to have too much going for it - Poles aren’t terribly exciting weapons (other than their high combo rate and ability to hit flying creatures), and while they get access to the Expose and Wither technicks, that just makes them a poor man’s Foebreaker. The Monk has all three Swiftness licenses, although two are on a license island. This isn’t as terrible as it seems, however, as you only need pick a second job with either the 50 LP or 80 LP Swiftness license and you’ll be able to island hop and get the other… so basically any pairings save Monk/Knight or Monk/Red Battlemage will get all three Swiftness licenses without having to use an Esper. Other than that, however, their key selling point is that they have access to every HP license. These two things alone are enough to make it an interesting support job.

All that build up serves only to intentionally under-sell the Monk, however, as it’s far better than the sum of its core licenses let on, as it can - with the help of Espers and Quickenings - gain access to a wide variety of potent White Magicks. Behind the 75 LP Quickening you’ll find White Magick 9, which will give them Curaja and Bravery. If the best party-healing magick and an attack buff aren’t good enough, Hashmal opens up White Magick 4 (Cura and Raise), Zodiark can unlock White Magick 13 (Renew), Famfrit will give White Magick 10 (Dispelga and Arise), and best of all Chaos allows you to access White Magick 11 and White Magick 12 (Holy, Esunaga, Protectga and Shellga). If you merely gain access to White Magick 9, 11 and 12 you’ll have turned the Monk into a competent healer, buffer and debuffer.

With all that in mind, the Monk as a stand-alone job is easily a match for jobs like the Knight, but like most jobs, where the Monk really shines - and what determines its ultimate utility - is how it works in combination with other jobs. At this the Monk is downright broken, as the Monk’s HP licenses make it a welcome addition for any mage, and its addition of White Magick will further expand a mage’s magick arsenal. Since the White Mage doesn’t need any more White Magick, and the Red Battlemage is one of the few jobs which will not get all three ranks of Swiftness, this leaves only the Black Mage. The Monk/Black Mage combo is simply one of the best in the game, having access to all Black Magicks, a healthy store of HP, all three ranks of Swiftness and a fine selection of White Magick.