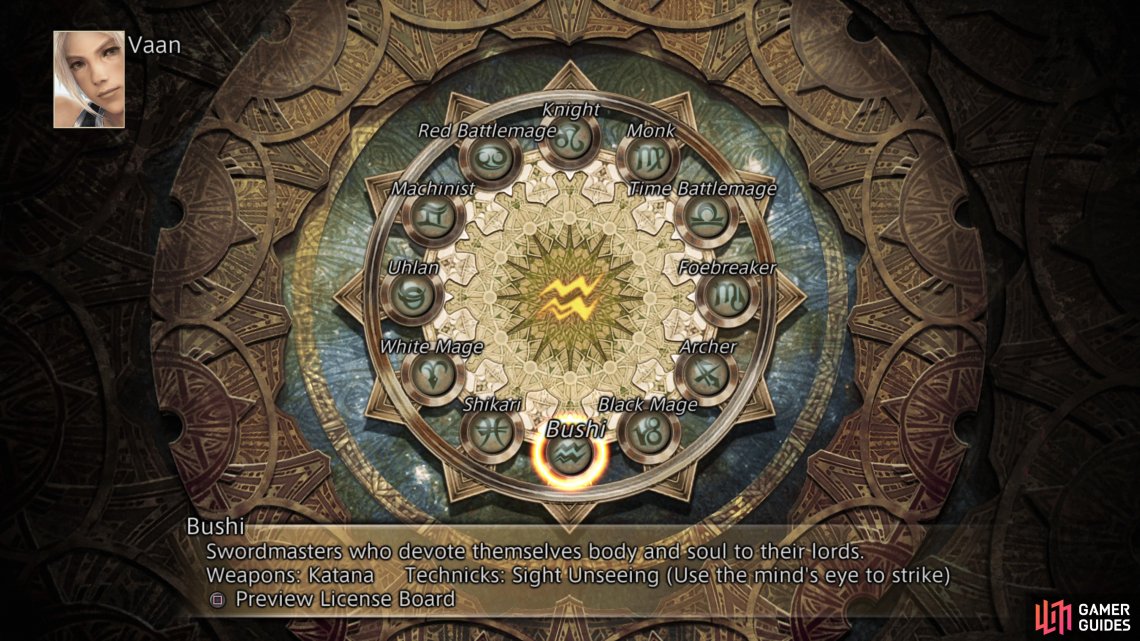 The Bushi is an interesting class, as it’s the only class that gets access to Katanas, including the ultimate Katana, the Kumbha. Katanas use both Strength and Magick Power to determine damage, and suitably the class has access to both Magick Lore and Battle Lore licenses. Your first instinct may well be to pair the Bushi with a magick-user, but this is less than ideal, as if a character is a potent mage, they should be casting magicks and not swinging a sword - pick one way of dealing damage and stick with it. On the other hand, when paired with jobs that can access support or healing magicks, the Bushi will perform somewhat better at those tasks thanks to their ability to wear Mystic Armor.

On the Bushi License Board you’ll find all three ranks of Swiftness, making it an ideal boost for slower jobs, but trying to split focus between Strength and Magick Power has its downsides - the Bushi has access to only six Battle Lore licenses (plus two more behind Quickening Gates) and twelve Magick Lores (plus two behind the Zeromus Esper Gate). This imbalance is yet another reason not to pair with a mage job, given the inevitable Magick Lore redundancy and Mystic Armor redundancy. Fortunately the Bushi has access to a fair amount of HP licenses, having access to HP 2 - 8, while HP 9 - 11 are behind Quickening Gates.

With all that out of the way, there are two excellent pairings for the Bushi. Well, three, really, as Monk/Bushi works well, but Black Mage/Monk is arguably better, and only one Monk in any given game will get all those lovely White Magicks. That out of the way, the two remaining are Shikari/Bushi and Knight/Bushi. The Shikari/Bushi will get access to both Ninja Swords and Katanas, making it the clear winner for sheer ninjamurai nerdfest potential. On a more serious note, this combo will make the Yiazmat battle much, much easier thanks to being able to use the Yagyu Darkblade while wearing Dark Robes and Genji Gloves. On the other hand, that’s mixing up two of your jobs that have access to all three ranks of Swiftness, and if you’re going for a twelve-job party, that may complicate things.

The Knight/Bushi has a whole lot going for it, too, as the jobs synergize incredibly well. Bushi has a good bit of Magick Lore, but for a melee-focused character, relatively little Battle Lore. The Knight will improve that somewhat, while benefiting greatly from the Bushi’s three ranks of Swiftness (compared to the Knight’s one rank). The Knight’s Heavy Armor will further boost the Bushi’s Strength score, while the Bushi’s Magick Lore licenses will increase the potency of the Knight’s White Magicks, if you’re willing to invest an Esper or two to the task. Speaking of which, pairing with the Knight and assigning Ultima will get you yet another Battle Lore and the Telekinesis technick, the latter of which provides a much-needed ranged solution for both the Knight and the Bushi. This combo can also make use of Excalibur (Holy elemental Greatsword) while wearing White Robes (+50% Holy damage) to make short work of undead. If a badass paladin strikes your fancy, Knight/Bushi might be the combo for you.