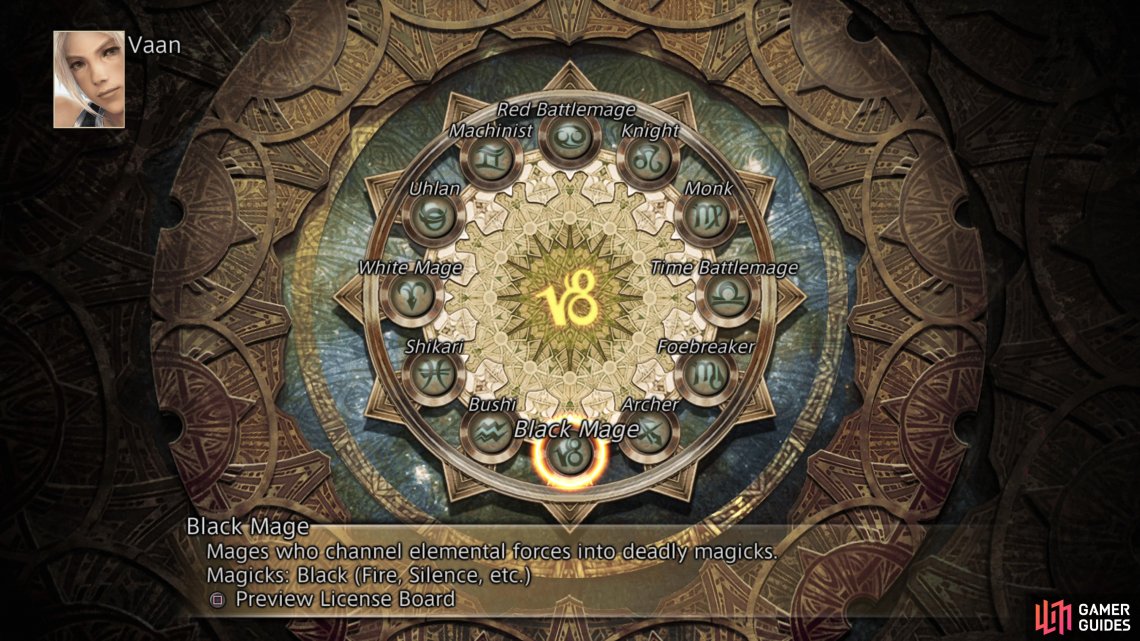 The Black Mage has two roles in combat, at which it excels - blasting foes with magick (usually elemental magick) and inflicting detrimental status effects on them. Despite what seems an obvious knack for blasting foes with powerful magicks, their ultimate magick - Scathe - is not too bad, but not entirely amazing. It’s non-elemental, so you don’t have to worry about any foes negating or absorbing the damage, plus it hits multiple enemies. However, its animation can be a little slow and the area-of-effect can sometimes be a little wonky, as some enemies that should be hit with it might not get blasted. Despite that the Black Mage will likely be your most potent damage-dealer through the mid-to-late game areas, with few exceptions, so you don’t have to rely on something like Scathe to get the job done.

Being a magick-user, they abstain from physical combat and instead focus on Staves, which can be used to deal Strength-based melee damage, but their attack power is quite poor compared to most other weapons. You’re far better off using them for the boosts they give to Magick Power and, in some cases, to elemental damage. Ignoring the relatively negligible Magick Power boost (ranging from +2 to +8, depending on the weapon), elementally-attuned staves will increase the damage of said element by 50%, so don’t sell all of any staves you get. You never know when you’ll need to exploit an elemental weakness.

As for licenses, there’s nothing terribly surprising about the Black Mage. Being a magick-user they have a relatively poor selection of HP licenses and two Swiftness licenses (LP 30 and LP 50). When you take into consideration their license islands… well, they’re not a secondary class. You pick a Black Mage for their massive single-class upsides - their Black Magick - and pick a support class that covers for their weaknesses.

To this end, it’s hard to beat the Monk, as it’ll add a great deal of HP licenses, and you’ll be able to purchase the Black Mage’s 50 LP Swiftness license and island hop to the Monk License Board and buy the 80 LP Swiftness license. Invest some Espers into the Monk and they’ll also be able to access a treasure trove of White Magick - including the Holy spell - which will prove a potent addition to the Monk’s arsenal thanks to the Black Mage’s high Magick Power. Frankly, it’s one of the most absurdly over-powered class combinations in the game, and a team with a Monk/Black Mage in it is probably more powerful than one without.