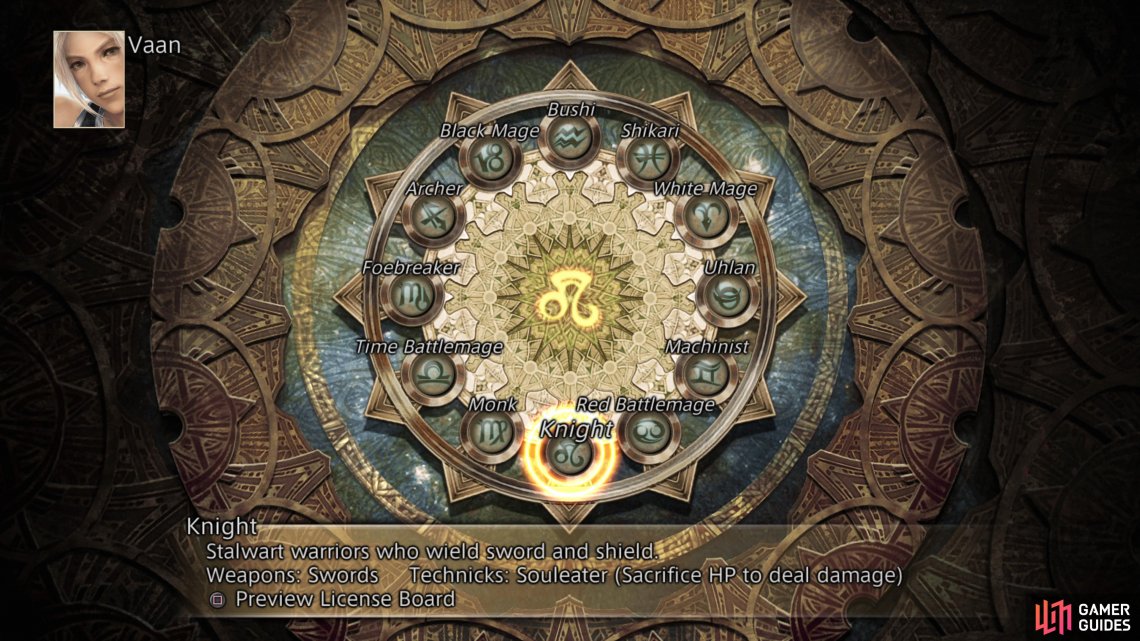 The name really should give it away. Swords, Shields, Heavy Armor, good HP, a selection of Battle Lore licenses (10)… the Knight is your bread-and-butter melee warrior. At this, it excels, and if you’re willing to do the work, there’s a good chance this will be your strongest character for around half the game, as you can nab a Karkata and a Deathbringer rather early on. Their only real versatility, however, is switching between sword and board and Greatswords, and for almost the entire game they’ll have no real way to contribute at a range.

Despite that, the Knight is one of the stronger jobs in the game, if properly augmented by Espers, anyways. Behind the Mateus Esper Gate you’ll find the White Magick 6 - 7 licenses, while the Hashmal Esper Gate blocks White Magick 8 - 9. Invest these two Espers to the Knight (easily done, as no other job arguably benefits more from them than the Knight) and you’ll have turned your brute melee character into a white Knight, or paladin, if you prefer. Access to the buffs Bravery and Faith and healing magicks like Esuna, Cleanse, Curaga and Curaja will make them useful characters in almost any party, against almost any foe. Assigning Ultima to them is somewhat less important, but it will give them another Battle Lore, as well as the Telekinesis technick, which will overcome one of their greatest weakness - the lack of a ranged option.

All that remains to be determined, then, is what job to pair them with? The White Mage is out, for obvious reasons. There are, in fact, two great combinations the Knight works with: Knight/Time Battlemage and Knight/Bushi. Both get all three ranks of Swiftness, which the Knight sorely needs (the Knight shares shame with the Red Battlemage as being one of the two jobs that get only a single rank of Swiftness), both will add Magick Lore to the Knight’s arsenal (buffing up their White Magick). The Time Battlemage utilizes Heavy Armor, though, which is a redundancy, but makes up for it by adding Crossbow licenses, giving the Knight a ranged option besides Telekinesis. The Bushi, meanwhile, adds Mystic Armor, potentially further enhancing the Knight’s Magick Power, and allowing them to wear White Robes while wielding Excalibur - armor that boosts Holy damage by 50% and a Holy elemental Greatsword, respectively.

Ultimately the Knight/Time Battlemage is an awesome melee tank and support caster, having access to magicks like Curaja, Esuna and Hastega, while the Bushi is the ultimate swordsman, utilizing Swords, Greatswords and Katanas, as the need fits, while alternating between Heavy Armor and Mystic Armor, depending on the weapons used. Arguably the Knight/Bushi has more synergy and more interesting equipment options, but it’s really hard to go wrong, either way.