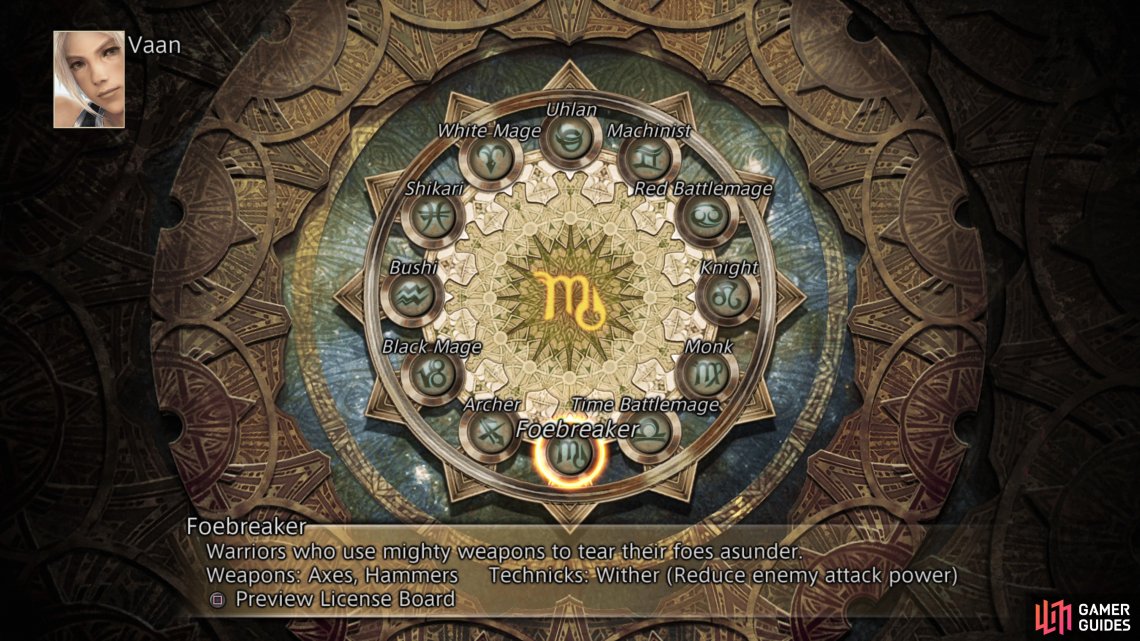 The Foebreaker has one major selling point - they gain access to all four stat-lowering technicks: Addle, Expose, Shear and Wither. For most of the game, these technicks will be of dubious value, but against late-game foes they can prove very handy ways to increase your damage output while lowering theirs. Otherwise, the class comes with a few perks, including HP 1 - 10 licenses (a respectable 2,100 HP), twelve Battle Lore licenses, three ranks of Shield Block, Heavy Armor, access to all Shields, and the Genji armor license. All in all, it’s a warrior class that offers a lot of stats, staples, and technicks, but little else of interest.

On its own, it’s arguably the least impressive of the warrior classes (Bushi, Knight and Uhlan being the others). Axes & Hammers are just not a great weapon category due to their wildly fluctuating damage (which are influenced by a character’s Vitality, as well as their Strength), they only gain one rank of Swiftness without making use of Espers, and they get nothing comparable to the Knight’s excellent Esper licenses. Their technicks and HP make them an interesting secondary class, however.

In particular, the Shikari - another melee-focused class that could use some help - makes for a fine pairing. The Shikari isn’t doing terrible as far as HP are concerned, but adding Addle, Expose, Shear and Wither to its arsenal will make it a useful contributor in some of the most difficult battles in the game, and the extra Battle Lores and Heavy Armor provided by the Foebreaker turn the Shikari into a tank with high DPS potential. The Foebreaker, on the other hand, benefits from the Shikari’s three ranks of Swiftness and Ninja Swords, which, when combined with the Foebreaker’s ability to equip Genji Gloves is just gravy.

Another passable combination is the Foebreaker/Machinist, which allow for all three ranks of Swiftness and a decent ranged option (Guns) thanks to the Machinist. More importantly, you’ll add the Machinist’s Time Magicks (hidden behind the Famfrit Esper Gate) to the Foebreaker’s arsenal, allowing them to buff their allies and debuff their foes, making for a convincingly competent character. This combo also allows you to free up other problem jobs and make use of the Knight/Time Battlemage and Bushi/Shikari combos.