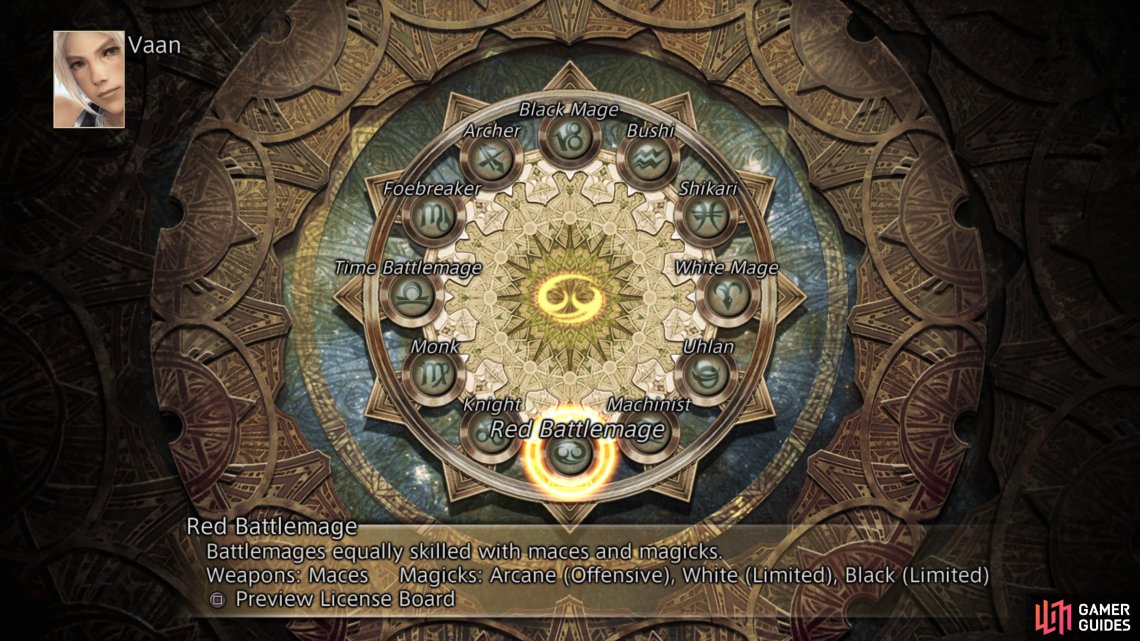 Red Battlemage is the jack-of-all-trades of mages, having access to Black Magick 3- 6, Time Magick 1 - 3 and White Magick 2 - 6. They also have access to all Arcane Magicks and Green Magicks, the former of which will allow them to cast the most powerful Fire elemental magick in the game, Ardor. Throughout most of the game, this versatility is wonderful, as it’ll take quite a while to accumulate the high-tier magicks that’ll finally allow your more specialized mages to surpass the Red Battlemage. Eventually, however, Cura just doesn’t cut it, and by the time your other mages gain access to the -ga and -ja magicks, the Red Battlemage will start to transition into more of a supporting role.

For when magicks aren’t sufficient to the task at hand, the Red Battlemage also has access to Maces, which are reliable, if not spectacular weapons. In addition, they have more HP than the other mages and access to all Shield licenses. Don’t be fooled into thinking this makes them a viable late-game melee class, however, as they truly excel at magick. That this is their true calling is made clear by the amount of Magick Lores (12) they have access to compared to Battle Lores (1), and the fact that they wear Mystic Armor to further keep their Magick Power high.

The merits of mixing this job with the Archer has been gone over in great detail under the Archer section, but to summarize, you’ll get a healthy influx of technicks, Light Armor licenses, much more HP, all the item lores, and more importantly, all three ranks of Swiftness. This is very nice, as the Red Battlemage is one of two jobs that only has one rank of Swiftness, otherwise. Best of all you’ll be able to use the Burning Bow, which will make your Ardor spell much, much stronger. If your heart is set on using all twelve classes, it’s hard to find a better pairing for the Archer and Red Battlemage than with each other. It’s also a role that seem tailor-made for Fran… if you care about lore, that is.

As far as Espers go, Famfrit is interesting, as it hides two Battle Lores behind its Esper Gate, but you can island hop those with the Archer, and use the Red Battlemage’s HP 11 license (behind a Quickening Gate) to island hop behind Famfrit’s license on the Archer License Board. The two most interesting Esper Gates remaining are Zeromus, which will give you access to the LP 80 Channeling license and Cuchulainn, behind whose Esper Gate you’ll find Black Magick 9 - 10. Putting these magicks on the Red Battlemage will allow them to function as a secondary Black Mage and dramatically increases their offensive utility in the late-game. Ardor is, with the right gear and against the right foes the most powerful magick in the game, but it’s also an expensive cast, using around 50% more MP than the -ga spells do, and of course, there are enemies who negate or absorb Fire.