To start this sidequest, you need to have completed 013 Yung Mein, the Trainee Guard, which you can do during Night at the Library. When you’ve done this, visit Evermore to find that Yung Mein has a quest for you. In return for training with Gao Jia, Yung Mein wishes to get some of Gao Jia’s favorite treats, which are scariwinkles. She needs five of them, but at the time you can first get this quest, you won’t be able to do it. You’ll have to wait until later in the story, as scariwinkles will spawn in another area, the Makronos, which is by Hydropolis. 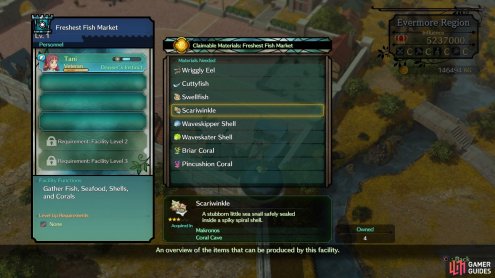 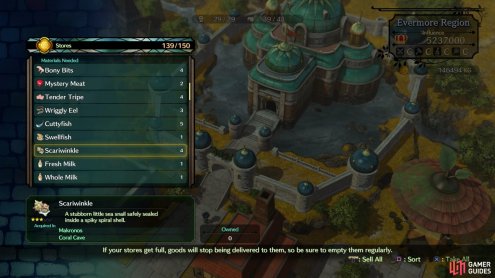 Another alternative for that is to wait until Chapter 5, as you will be able to recruit more citizens to your kingdom and level it up to two then. With that, you can level up the Fresh Fish Market to three and have a chance to get scariwinkles from there. However, you can also build the Fresher and Freshest Fish Markets at kingdom level two, which have scariwinkles right off the bat. Put citizens in the latter two (and nowhere else, if you want) to get a higher chance than the Fresh Fish Market.