When the chapter begins, you'll be back at Evermore and your next place to visit will be Broadleaf. Unfortunately, it's on the other side of the giant oceanic rift, which means sailing there is out of the question. However, Leander mentions something about a jumping ship, with plans to upgrade your very own ship to do such a thing. When you regain control, speak to Leander in the throne room and your ship will be enhanced, allowing you to cross the rift. Yep, it was as easy as that, with no need to do some minor quest or anything. There are specific places in which you can jump the rift, which you'll know as you get close enough, as there is an updraft; simply sail right into them and you'll automatically cross on your own.

Before heading off to Broadleaf and advancing the story, you can do a bunch of sidequesting right now, as it's the start of a brand new chapter. First of all, you should be able to finish up 037 Tiller, Long-Distance Rower now, since you got a Four-Leafed Soreaway in the Abyss. This will bring you back to Capstan-upon-Hull, where you'll be able to begin two new sidequests. Note that you won't be able to do anything with 042 Daddy Come Home yet, as it's in an area inaccessible by boat, so you'll have to wait a good while, until Chapter 7 actually. 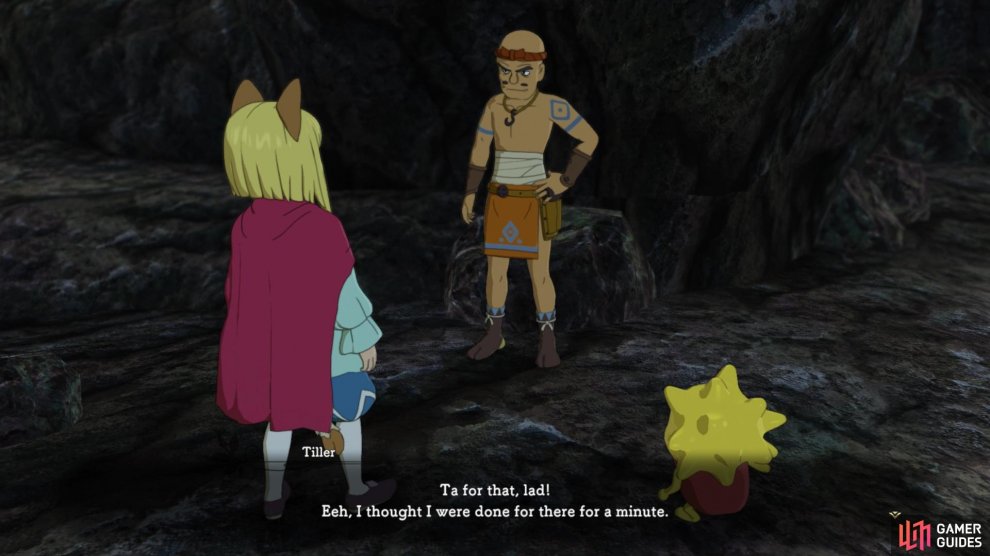 Next up is Goldpaw, where there should be only a single sidequest available near Fortune Square. Much like the previously mentioned quest above, you won't be able to do this yet. For this next quest, you need to have researched the specific spell at Spellworks called Nature's Tongue. Teleport to the world map by Forest of Niall, then look to the west of it to find some mushrooms you can grow to reach a new area. Up here, if you journey to the end, you'll find a chest with a Hearty Pendant, but there is also a cave named Greenglade Cave. Enter it with Nature's Tongue learned to get a cutscene and another sidequest.

Let's get this sidequest out of the way real quick, since you're in the cave and all. If you came here without Nature's Tongue, then you wouldn't be able to fully explore the cave, but you can delve deeper with it now. There's nothing of worth, though, other than random sparkles, so when you come to the four-way split, just go west to encounter the trouble-causing Porc. Defeat him and his hedgehounds in combat, then open the chest in the area for 3 Gloaming Cottons. Report back to the grimchilla elder to finish the quest.

Alright, the last destination on this sidequesting trip is the obvious, Hydropolis. There will be a total of seven sidequests on the map, five in the city and two in the throne room. Additionally, Swift Solutions has upgraded and will offer seven new citizen "quests" for you, as well as a few new items. In order to get all of the new citizens, you're going to need 173 Tokens of Gratitude. All but one of these citizens will be in Hydropolis, with the final one being in the Forest of Niall. Note that once you finish 057 The Way to a Man's Heart..., then 045 Glaucus, the Ambitious Angler will unlock.

There's a few other things to explore, but the main story has been postponed enough, so it's time to finally set sail for Broadleaf. To get there, you will need to jump the oceanic rift, which has multiple spots that you can use. The closest is in the southeast, in between Leucippes' Labyrinth and the Drylands. Simply approach the spot where you see an updraft and sail right into it to have the boat jump it automatically. Once you jump it, follow the coast of the Drylands around and to the north, where you'll see another rift to jump across. 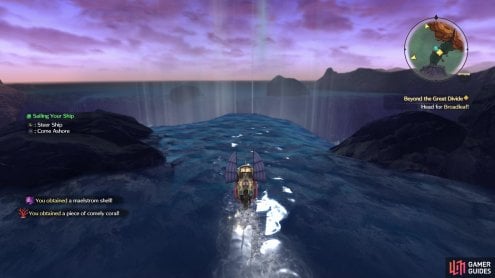 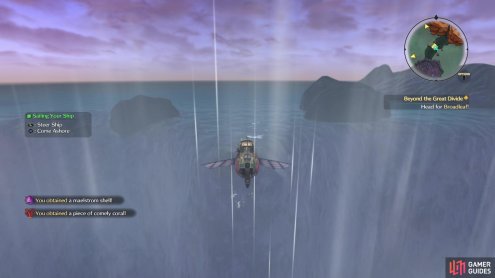 Do this and the landing zone for the Broadleaf area is not far to the northwest. Well, the landing area is not exactly in the best of shapes, but there will be a Trip Door just ahead of you (Junkyard Mire). To get onto actual land, head north and then northwest to find a slope to climb. Continue north and follow the edge of where Junkyard Mire is to the east, where you'll find a chest tucked away in the corner (1900 guilders). There's a slope here leading down to the cogs, where you'll find another chest (5 Bully Buttons).

Back to where the first chest was, follow the mountains north and then to the east to find an isolated section. There will be a chest to the south (Strong Sixth Censer), as well as the entrance to East Wood to the north. Head inside and just follow the path to a split, where you'll spot a chest at the dead end (Shiny Magic Muffler). That's all that is here, so exit and return to the main area. You should see a Tainted Monster on an elevated area, as well as a blue chest just below it. Follow the cliffside here to the north and as it curves west, you will find some mushrooms to use Quicken Growth on, as well as a chest right next to them (Gotta-Fly Flakes).

Help the shrooms grow and climb them to the elevated area. There will be a blue chest (not the same one as before) just to the northwest, so open that first (Superior Sixth Censer). A narrow path on the northern end leads to the snowy north, with a level 34 Tainted Monster named Fanger blocking entrance. Feel free to defeat the Tainted Monster to get a Dark Backshot Bow, then head west down a slope to find a Trip Door (Jack Frost's Playground). That will be all for this area, though, as the enemies are definitely a lot higher in level than the previous area. Double back to the previous area to the south and look for the slope to your east that allows you to get to where the first Tainted Monster was located, but look for the Sublime Shrine and enter it.

The monsters inside here can range from levels 40 or so to just above 50, so be careful in your confrontations. Go south from the beginning to find some enemies waiting for you in the first room, then continue west to the dead end to find a chest (3 Snuggly Wools). South will have more monsters, so defeat them and keep delving deeper. When you come to the half-circle shaped room, there will be a higgledy stone to the north. It will want a coarse-grained lumber, so give it one to have Unkimmon the Uncommon join you on your adventure. The final room in this mini-dungeon houses a Dreamer's Door, but you probably don't want to go inside just yet, so exit back to the world map.

Remember that one Tainted Monster? Well, it's to your south and is level 57, so ignore it for now and drop off the ledge to snatch that blue chest below (Hig-Piggy Wand of Wisdom). Drop down once more to re-enter the main area, then return to the mushrooms you grew earlier. To their west is a slope that leads to a path shaped like a hroseshoe, which goes around and to an area you can't reach. About halfway on this path is a chest, so open it for a Poised Pendant. In the bottom left corner of the horseshoe is another chest (Sickening Sick Shooter) and at the end is the entrance to Powder Keg Cavern. The only thing you'll find in here is a chest in the southernmost room, with 3 Slate-Grey Threads inside. 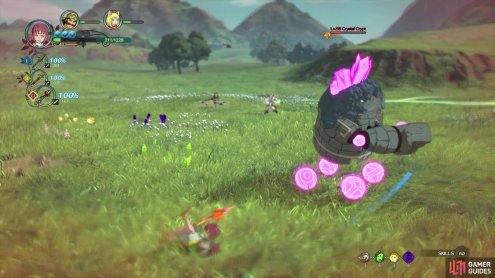 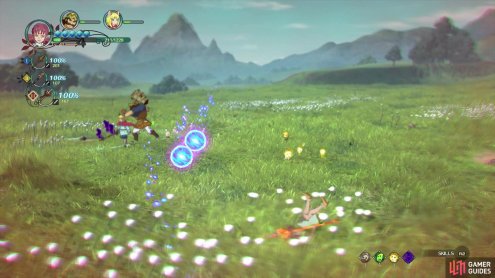 Exit back to the overworld and look for the ledges you can drop down in the southwest corner of the horseshoe. Follow this cliffside to the north for a chest (Four-Leafed Soreaway) and then farther north for another mini-dungeon, Fathomless Forest. There is a Tainted Monster not far in that is blocking passage to the deeper parts, a level 38 Florette. It's a sylph-type monster, which should be easy enough to defeat at this point. You'll receive an Allproof Autumn Mantle for felling the beast, plus you can explore more of Fathomless Forest.

South of where the Tainted Monster was is a higgledy stone, with this one asking for a fine fur. Hand it over to have Bumbleizz the Blowy join your team. To the west of that will be some enemies, as well as a chest (3 Fine-Grained Lumbers). Exit to get back to the world map and start making your way to Broadleaf, as you've pretty much exhausted all options for exploring. Enter the city for a scene, which will bring us to our next objective for this chapter.