Keeley has been staring out to sea, waiting for her dad to come home. While you can start this sidequest in Chapter 6, you won’t be able to actually do anything until later, since you need an airship to gain access to the Drylands. When you reach Chapter 7 and gain access to the Zippelin, you can finish this sidequest. The Drylands is located south of Broadleaf and there will be a blue circle on the western side of the landmass. Within that blue circle, you want to keep a lookout for a cave, towards the upper end of the circle, which is Crackskin Cavern. 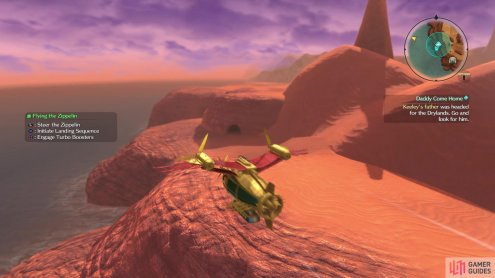 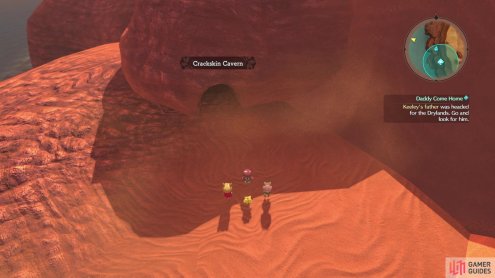 Enter the cave and look for the belongings in the northwest corner, so check them out and a spirit will spawn. With the Spirit Medium spell from the Spellworks in Evermore, speak to the spirit to find out it’s Keeley’s father. He will ask you to do a favor, which is to retrieve a necklace stolem from him by some monsters. Exit the cave and the monster in question will be right behind you, a level 44 Tainted Monster named Klogg. He is one of those ape-like monsters you’ve fought already, so there won’t be any differences.

Just be a little bit careful with Klogg’s charge attacks, as they can do some damage (Tainted Monsters have some high strength if you haven’t figured it out by now). For felling the beast, you will receive 5 Four-Leafed Soreaways, as well as Keeley’s Keepsake. Return to Scully with the keepsake, back in the case, who will ask you to bring it to his daughter back in Capstan. Go ahead and do that now, handing over the necklace to Keeley to finally put an end to this sidequest.