At the beginning of this chapter, you will receive a crash course in how to run a kingdom. One of your kingly duties is to assign your citizens into roles, which is Roland’s first task. Begin this by sitting on the throne, which will direct you into a bunch of tutorials. After a brief overview, you will see that running the kingdom will require a different currency than guilders. Kingsguilders (KG) are only used for building your kingdom and you will be able to acquire them in a few different ways, but the main way is through your coffers. The coffers will build up over time, so you will want to head back to Evermore to collect them from time to time. 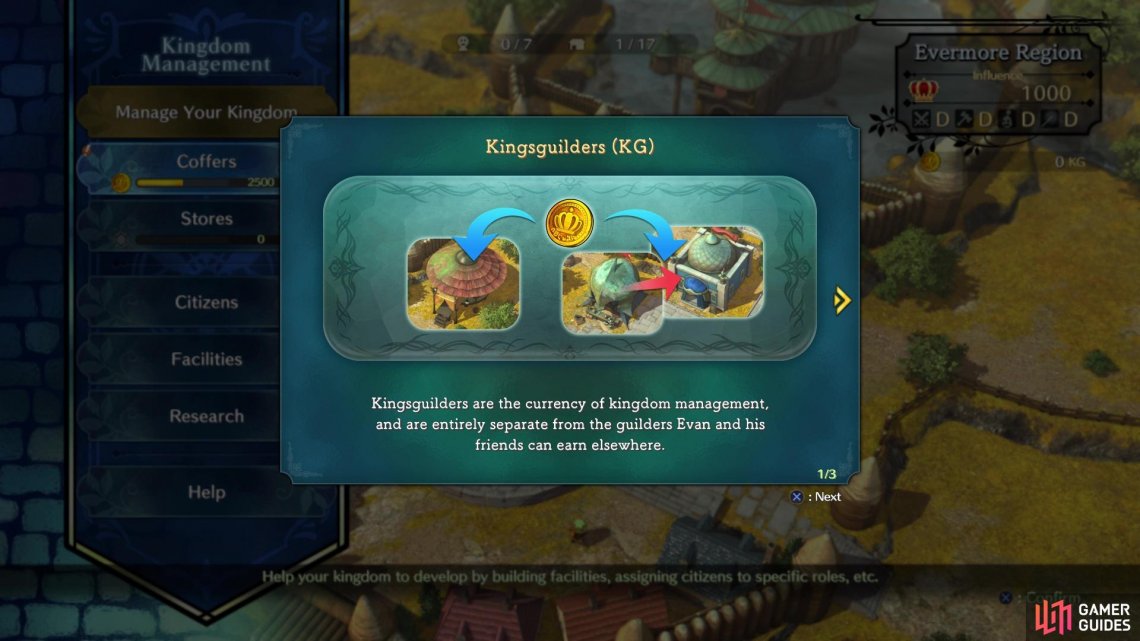 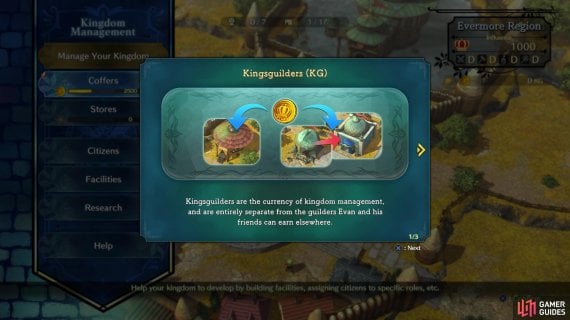 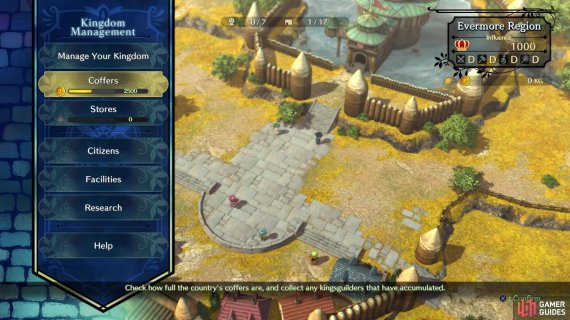 Kingsguilders will be your currency for building your kingdom (left), and they will build up over time in your coffers (right)

With Kingsguilders, you will be able to begin construction on various facilities. Select “Manage Your Kingdom” from the menu, where you can build them. Not only can these facilities provide a basic function to your kingdom, but you will be able to perform research that will help out even farther. To begin, you will be able to construct four facilities in the plots surrounding your castle: the Higglery, Weapon Workshop, Outfitters, and Spellworks. Go ahead and make each one, as you don’t have to worry about any requirements and the 2500KG you got from the beginning will be more than enough.

Next up is research, which most facilities can do to provide some kind of benefit, either to the kingdom or to Evan and his allies. In order to research a given topic, you will need personnel with enough IQ, as well as the correct amount of KG. Note that some topics will have extra requirements. Performing research will take time, with more complex ones taking longer, but a higher IQ can cut this down, plus you can hasten it by spending KG. Of course, finding the right citizen will be an important part in helping with this.

Each person will have different IQs, which are War, Ingenuity, Spritecraft and Conjury. You wouldn’t want someone adept at War to be in charge of the Spellworks, for instance. Also, citizens will have their own special skills, which might influence where you assign them. For starters, you will need to assign some people to the Weapon Workshop and start some research. Click on the building and then Personnel, assigning Batu, Chingis and Khunbish to it. Next, go to Research and pick the only option available, looking to see that it requires an IQ of 100, which is easily accessible with the three people you assigned. Of course, with more IQ, it takes less time, so it will be done within seconds.

When it’s finished, click on the building again and pick the Complete Research option. You will receive another tutorial about how some facilities will allow you to gather a plethora of materials by having people collect them. When on the main menu for your kingdom, you should have seen the “Stores” option underneath Coffers. Similar to that, your stores can only hold so much, so you will want to return to Evermore to empty it. That covers the basics of kingdom building, but something is a bit troubling. 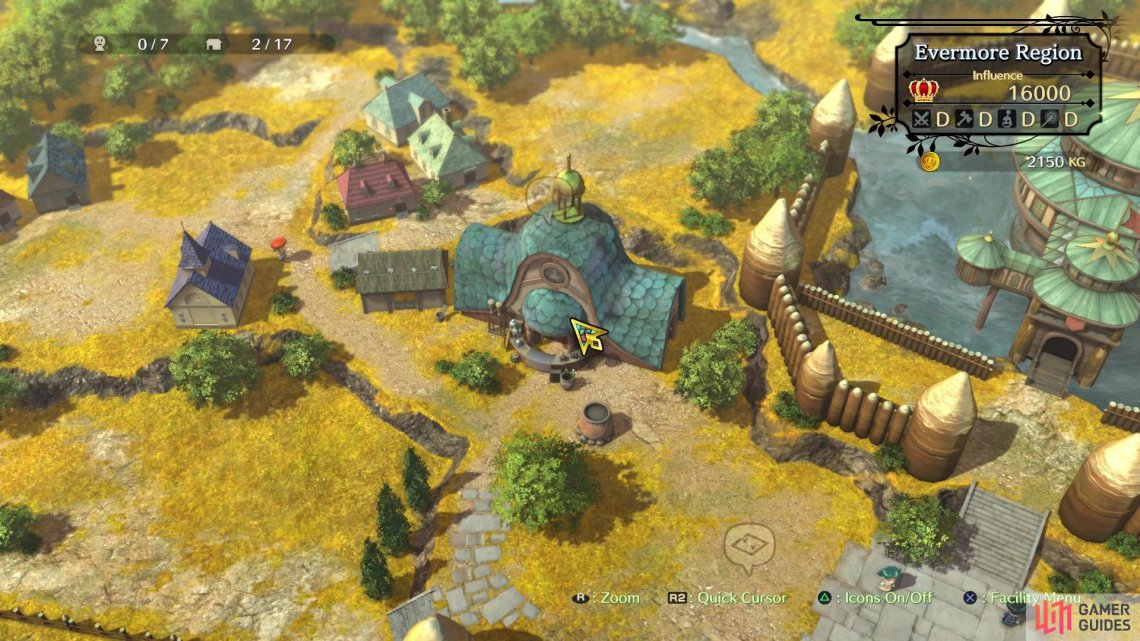 (1 of 5) Build facilities using your Kingsguilders

Note: You can construct a lot more facilities at the moment, up to a total of 17, most of which will allow you to start gathering various materials.

You have personnel heading up each of the buildings you just made, but there isn’t an expert for the Higglery. Of course, Evan knows just the right person, Auntie Martha, who you became friends with on the way to Cloudcoil Canyon. In order to exit Evermore, take control of Evan himself in town, then move to the bottom portion to find the front gate; just walk through it to get back to the world map. Teleport over to Auntie Martha’s Cottage, go inside and speak to her. She’d be delighted to join your kingdom, but someone stole her rub-a-dub scrubber, and the culprit is in Grotty Grotto.

This will officially start your first sidequest, with information appearing on your screen. Sidequests are important, not just for the rewards, but also because some of them will allow you to recruit new citizens. You can see the information about the sidequest by going into your menu, then Quests and hitting R1 to go to the Sidequests tab; press the X button to make the sidequest your active quest, which will help you with an objective marker.

If you don’t remember where Grotty Grotto is located, exit Martha’s house, cross the bridge to the northeast, then go directly east from there to find the entrance. Once inside, you’ll find the whamsters who stole from Auntie Martha in the very first room. They are all around level 20, so they should either be around your own and a little lower. You’ll receive the scrubber after the battle, but before you can leave, a mystery woman will appear. Approach her and she will hand over a Dreamer’s Key, as well as tell you about those mysterious doors you’ve been finding. 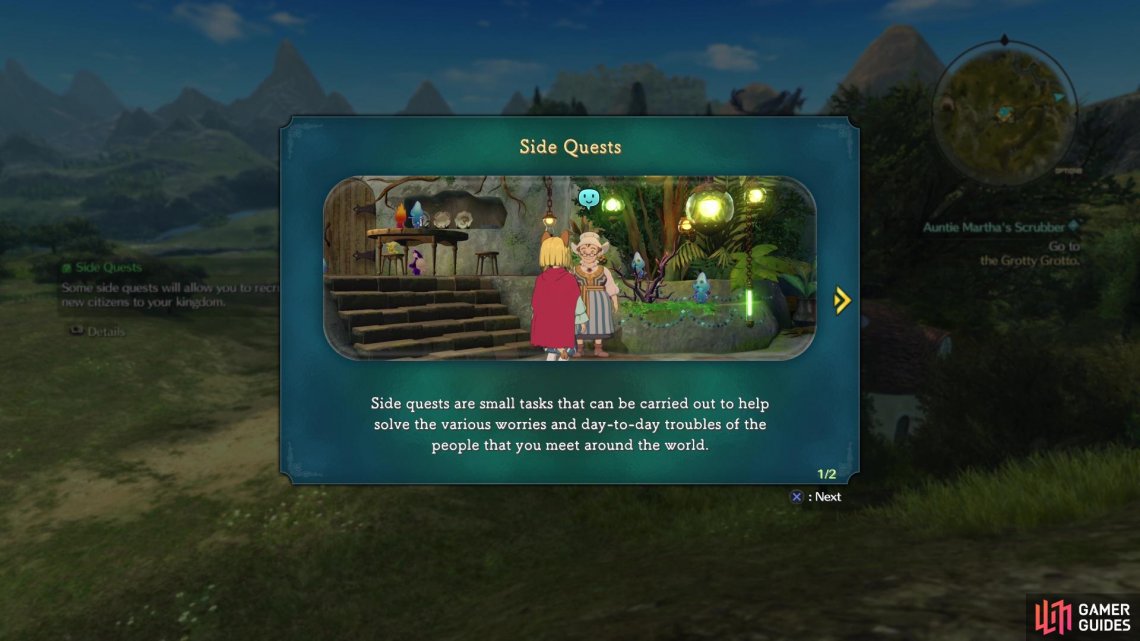 (1 of 2) Auntie Martha is your very first sidequest 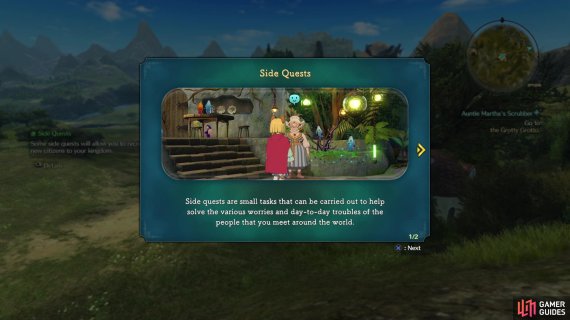 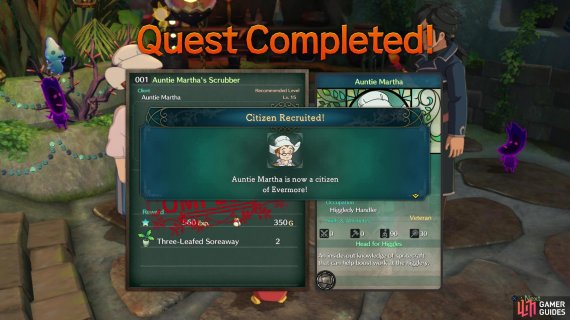 Auntie Martha is your very first sidequest (left), and she’ll become a Citizen of Evermore upon completing it (right)

Dreamer’s Mazes: The mysterious doors lead to randomly generated mazes, where you don’t have access to your map. The goal of each maze is to get to the bottom floor and defeat the guardian, but you will need to be wary of the Danger Level, which increases the level of the enemies inside.

You have the option to complete the Grotty Grotto Maze right now, which is entirely possible, as it only has three floors and the enemies inside are around your current level. Plus, the boss at the end is one you’ve already fought. As mentioned in th enote above, the floors in the Dreamer’s Mazes are randomly generated, so a normal walkthrough won’t work here. Instead, treat this section as a crash course in the mazes. The biggest mechanic regarding these mazes is something called the Danger Level, which is shown in the upper right corner.

As the in-game tutorial says, simply being present in the maze is enough to make the Danger Level steadily increase. Whenever it reaches the next level, the levels of the monsters inside of the maze will increase, so you will not want to dawdle while inside of the maze. Defeating monsters and breaking pots will usually award you with pink spheres, which are called key orbs. If you come across a statue while traversing the maze, you can offer enough of the orbs to lower the Danger Level.

Doing so will revert the Danger Level back to the previous level, while also resetting it back to 0%, so if you’re at Danger Level 3, then it will return to 0% at Danger Level 2. However, every time you use the statue, it will require more orbs the next time you encounter it. There may be special NPCs you encounter in the maze, who may offer to do something for you, for a price. This can include giving you orbs, lowering the Danger Level, or even just giving you an item. To progress in Dreamer’s Mazes, you simply need to find the door on the floor and interact with it to have an option to continue to the next floor or leave.

Note: Dying in a maze does not result in a game over, but instead kicks you outside. Any and all items/treasures gotten inside the maze, should you perish, will be forfeited.

Red chests are normal ones, but blue chests aren’t locked by a magic force like in the normal world. Instead, you will be able to offer up the same key orbs to open them for items or equipment. Thus, it’s a balance as to whether you want to save the orbs to lower the Danger Level or chance them on a blue chest. Your goal is to get to the end of the maze, with each one containing a set amount of floors (Grotty Grotto has three floors in total), and defeat the boss at the end. For this particular maze, you will be fighting the Mossy Monument, the same boss you fought just outside of the dice factory. 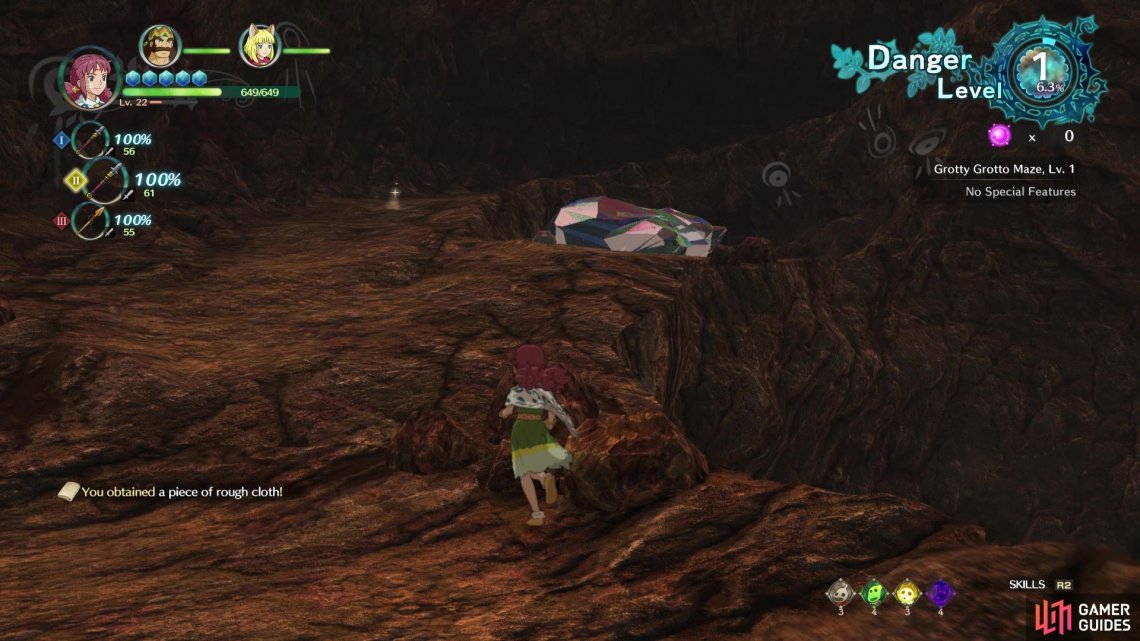 Your reward, besides any treasure, for completing Grotty Grotto Maze is a Red Dream Fragment, one of the fragments needed to complete [Top Marks for Trying]. With that out of the way, you can finally return to Auntie Martha and hand over the scrubber, finishing your first sidequest and also recruiting your first citizen.

A Bit on the Side

Awarded for completing your first side quest.

You’ll automatically be brought back to Evermore, where Roland wants to talk to you about something else. Before doing that, sit on the throne and assign Auntie Martha to the Higglery. At this point, you can do some research in any of your facilities, build some more of them (there are 17 total you can construct), or even partake in some new sidequests. A number of them have opened up in a few locations, such as Goldpaw or the Sky Pirates’ Base, so make sure you always search new places whenever you reach new points in the main story. You know a sidequest is available, as when you look at your map, you will an exclamation point on it. The available sidequests are as follows:

You should be able to complete all but 006, which requires an item that is easier to obtain in just a little bit. Whenever you’re ready, head into the throne room and speak to Roland, who gathers everyone to tell what’s on his mind. Everything is coming along nicely in Evermore, but you will need a shared purpose, or banner, for the kingdom. With your decision firmly in place, you’ll need to gather intel on rival kingdoms, and Niall suggests heading to the library in Goldpaw to do just that. 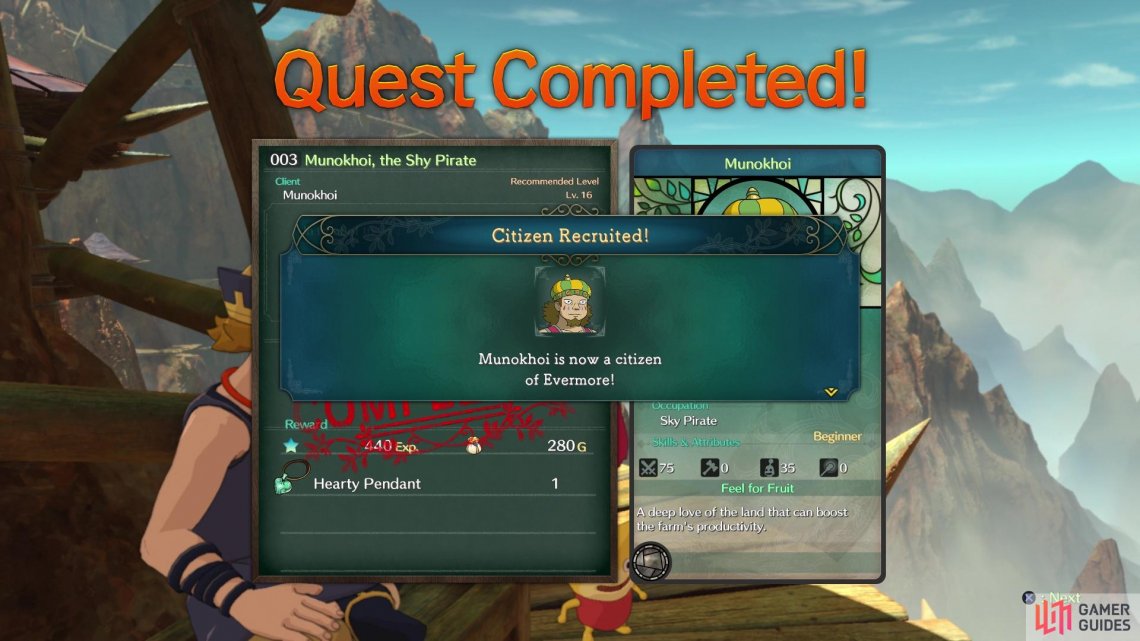 You can begin recruiting new Citizens by doing other sidequests, although there are only so many at this point

A Banner to Unite Under¶

Fast travel to the inn at Goldpaw and head up the stairs just to the northeast, where you will see the objective marker at the building on the right. Head inside for a scene, where you’re introduced to Boddly, the librarian. Before you can touch her “bookie-wookies,” you will need a library card. Unfortunately, only she gives them out and she’ll require three teeny-weeny little favors from you before she’ll hand one over.