Note: Patch 1.03 added two new difficulty options to the game, Hard and Expert. These feature tougher enemies, just in the form of more HP and attack strength, as well as better equipment drops from them. 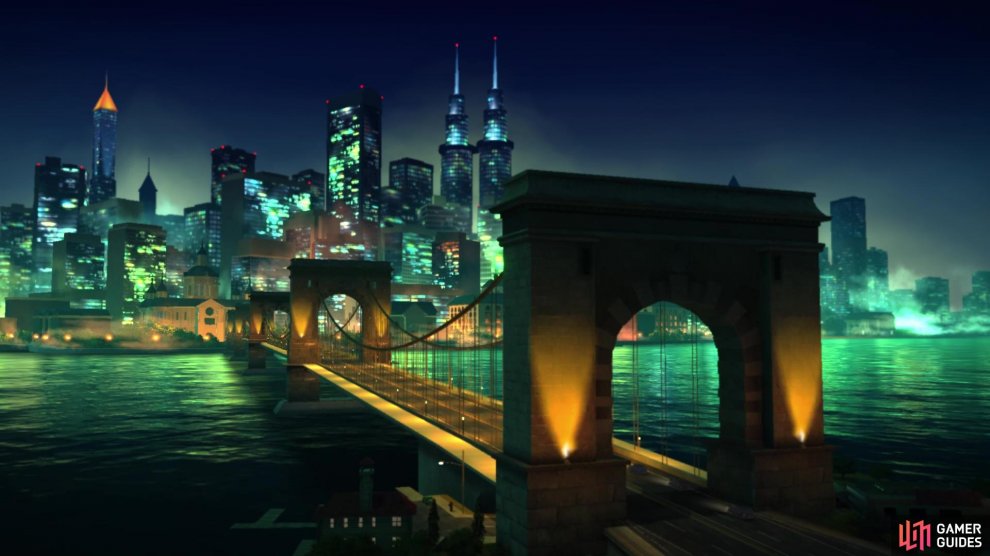 It is the modern day, at night, and we see a number of cars driving on the road, which turns out to be the entourage for the President. While on a bridge, the President looks outside his window and sees a missile heading towards the city. The missle reaches the city, explodes and the force of the huge explosion destroys buildings and knocks the cars back. The President is on the ground, in pain, but is shortly enveloped by a strange, blue glow before it cuts to the Chapter 1 introduction screen.

The game cuts to a strange land, where we see a guard rushing to a mouse-like creature, saying that the preparations are complete. We now see a young boy, in his room and looking out the window, when he hears a strange noise and slowly walks to the door. Behind him, a blue light appears and a young man in a suit shows up, falling to the ground. The boy brandishes a dagger and introduces himself as Evan Pettiwhisker Tildrum, the king of Ding Dong Dell. The young man, who bears a striking resemblance to the older president in the opening, pays no mind to the boy and walks out the door, which is where you will finally gain control.

Roland, who is actually the President, but mysteriously younger, is who you will be controlling for the time being. A tutorial window will pop up telling you how to move, which is done with the left analog stick, while you can use the right analog stick to move the camera. Run down the spiraling stairs and when you reach the open door, you see some guards standing there and talking. Evan calls for them to arrest Roland, but it appears they are not on his side anymore, sparking a battle.

Battling in Ni no Kuni II is rather simple, as it is a basic action-RPG system. You have two attacks, a light attack mapped to your Square button and a heavy one mapped to the Triangle button. You can combo a heavy attack off of a light one, but not vice versa, so if you start with a heavy attack, then you have to finish with heavy attacks. While the game doesn’t teach you about evading and blocking right now (they will shortly), those mechanics will be briefly mentioned here.

Blocking is done with the L1 button, but it doesn’t fully negate all damage and only blocks some of the full damage you would take. Note that your movement will be limited while guarding. To evade, you simply press the left analog stick in the direction you wish to dodge and press the L1 button at the same time. While evading, you will be briefly invulnerable, so you will want to figure out the timing to avoid those very powerful attacks. One last thing that will be talked about here is jumping, which is done with the Circle button. This can be done both inside and outside of battles, but during encounters, you might be able to use this to jump over something like shockwaves. 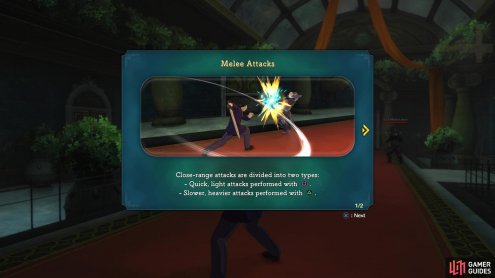 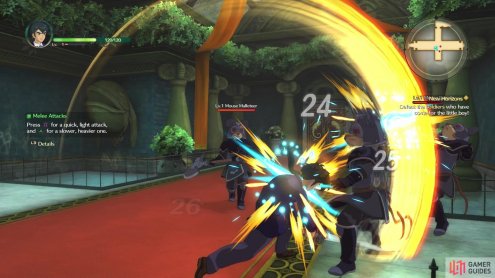 With the basics of combat out of the way, fight the three guards before you. They are very easy and you almost likely won’t get hit at all, especially if you keep attacking. The enemies won’t take long to kill and there will be a few scenes after the battle is over, with you regaining control in a destroyed hallway with rubble.