Raxel points out that Ding Dong Dell wants to do a mock battle with the forces from Evermore. The soldier from Ding Dong Dell is located east and a little north from Martha's Cottage, not too far from Grotty Grotto. The skirmish for this quest is level 46, which means it might be a little bit of a handful, depending on how you kept up on your army's levels. When you begin, you should see two units close to you, who are actually allies for this particular skirmish. Start off by heading northwest to the bridge, where you'll find some ranged enemy units and a command post.

Make sure you destroy the command post first, as the sorcerers will keep respawning while trying to the fight the other enemy unit here. Upon defeating said unit, more will spawn in the next area and you will be able to pass through the gate. You will have to contend with a few sword units, another sorceress, a lance and an archer. When you've finished them off, some wyverns will spawn to the north, all of which are sword units. Getting rid of them will open a few gates and a named unit (Felix, a sword) will appear near the siege towers to the northwest. 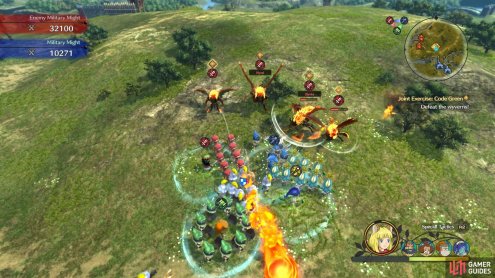 This guy is very tough and can quickly decimate your own forces, so it might be a good idea to use your skills on him. Also, don't be afraid to retreat to allow any defeated units to recuperate and come back into the fight. From here, you can head straight to General Greif, who needs to be defeated to finish the skirmish, but there are some cannons to the north of Ding Dong Dell. Your best bet is to head northeast to the gate up there, fight your way through the minor resistance (a siege tower and command post, then an archer guarding the cannons) and destroy them.

That'll leave pretty much Greif by himself--well, his four units and the miscellaneous near him, as well as two more siege towers. Greif is composed of two swords and two shields, so if you can take out the swords first, then you should be pretty home free. At this point, you can activate your skills on Greif, as well as Shock Tactics, which should end him quickly, finishing the skirmish and quest.