To continue with the main story, you simply need to speak with Doloran, but there is something that unlocked back in Evermore. A new sidequest opened up, should you want to do it (listed below), which should be pretty easy to complete.

When you’re ready to continue, head back to the room where you defeated Doloran and speak with him. There is no turning back after you do this, though, so if you commit, then you won’t be able to do anything else until the postgame. You’ll learn about Doloran’s true intentions in bringing back the Horned One, and everything will lead up to one final boss battle (speak to Lofty when you have to).

BOSS - The Horned One

As the final boss of the game, things are definitely going to be challenging. He has a lot of health and various attacks to watch out for, so don’t expect things to be a breeze or short. The Horned One starts out with some basic attacks, like slamming its one fist into the ground, create a big explosion. This move has a fairly big wind-up, so it should be easy to avoid. He can also create two orbs on either side of him, in which two giant shadow arms will appear and do a quick attack in front. The Horned One can also create four orbs, which will home in on your characters. 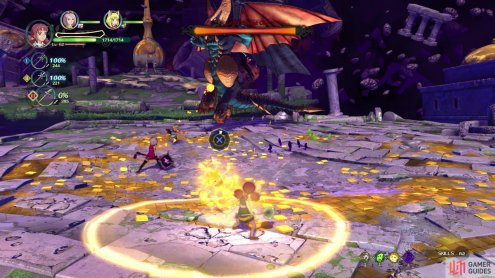 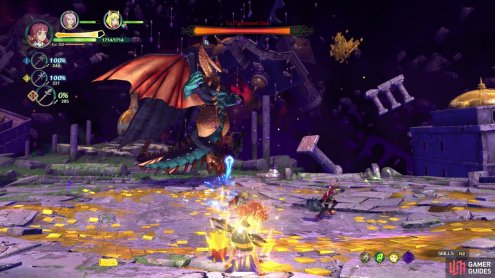 Continue the battle as is, until you see a quick close up of the beast, which starts the second phase of the battle. In this phase, the Horned One will be able to use the powers of the other Kingmakers to his advantage. Longfang’s power will cause boulders to drop into the ground, which will explode after a short amount of time, but they can be broken to replenish your health and mana. Brineskimmer’s power will just shoot ice lasers, while Bastion’s just summons a bunch of lightning. Oakenhart’s power will have the boss shoot vines across the ground, in which you’ll either have to go in between them or get close enough to the boss to avoid them altogether.

Note that during these phases and onward, the Horned One can shield his health from taking direct damage, which is shown as his health bar turning purple. Just attack the boss like normal to deplete it and turn his health back to normal. Another thing that the Horned One will begin doing at this point is teleporting to the edge of the arena, then shoot a giant laser. He tends to aim at you with this, so you can bait it to one side, then run to the other before it is fired. Whenever you deplete his barrier health, the boss will be stunned for a few seconds, but some shadowy crystal-like things pops out of him. Leave it alone and it will shoot lasers at you, so destroy it.

Only a single one will appear the first time, but three will appear the second time this occurs. Also, at this point, a ball of energy will randomly spawn that explodes after a few seconds, so always keep an eye out for that. During this entire battle, there is a special mechanic in place, which revolves around Lofty. You will see a magic circle under him, similar to the higgledies. Holding down the X button while inside of the circle will start filling in a meter and once it is filled, you will gain the power of Awakening. Use this to your advantage throughout the fight, as it will allow you to increase your damage against the Horned One. 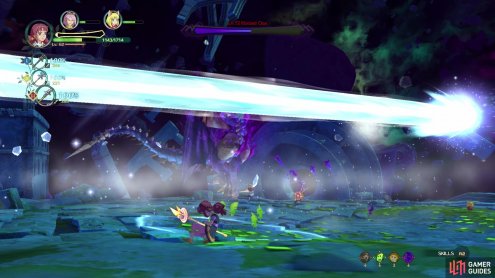 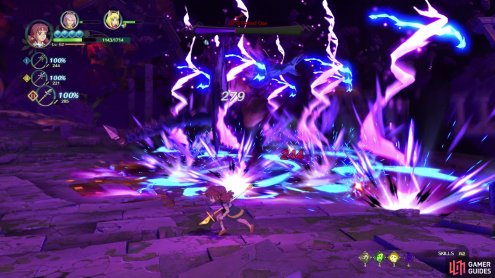 Once you finally deplete the boss’ health, things look like they are over, but not quite yet. The Horned One will put up another barrier on his health bar, but this one will be a lot sturdier than the others. At this point, you can fill the bar with Lofty once more, which will grant you with a permanent awakening. The Horned One doesn’t gain any new attacks in this final phase, although he can do multiple lasers at the edge of the arena in succession. Keep at it and eventually, you will see a small thing pop out of the boss upon depleting the health bar. Hit this and the battle will finally be over.

Congratulations on beating the main story for Ni no Kuni II: Revenant Kingdom. Sit back and enjoy the ending, then watch the credits roll. After they are over, you will receive the Robes of Unity, another new costume for Evan. You will also be able to make a completed game save, which will start you again after fighting Doloran, so you can actually beat the Horned One again, if you wish. You’ll know it’s a completed game save due to the star on the save file. Load up this save and you will be able to go into the postgame content.