Bao Wao says he has something to sell to you and that this might be your only chance to get one, so hand over 10,000 guilders to get Snake-Eyed Peas. However, he’ll run off and it shows that you’ve been ripped off, so you’ll need to chase down this Bao Wao to get your money back. He can be found at the top of the stairs northwest of the inn, where he’ll give you back your money and mention that snake-eyed peas really do exist, in a place called Floodfall Cave.

Given the name, it’s a guess that you’ll need a boat to reach Floodfall Cave, which is located just north of the northern tip of Sunrise Shore. With the knowledge that your ship travels with you whenever you teleport, go to the Calmlands trip door and venture down to Sunrise Shore. Board your ship and follow the coast to the north to spot the cave right there. Follow the path south and to the west as it bends, where you’ll see a blue circle enveloping the first open area. 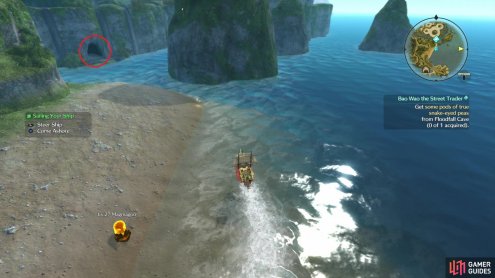 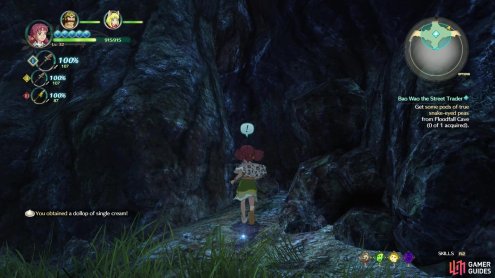 Some enemies will be present, with them being in the low 30s, but they are the same enemies you’ve been fighting up to this point, so they shouldn’t really give you much trouble. After clearing the area, look to the southern end of the room to spot a patch of grass, which has a blue sparkle in it. This will be the true snake-eyed peas, your objective. You are free to return to Bao Wao in Goldpaw, but you can finish exploring Floodfall Cave by finding a chest in the southwest corner (5 Crimson Crystals). Hand over the true snake-eyed peas for Bao Wao to finish the quest.