During Chapter 4, after you defeat the enemies there for Sidequest 001, a mysterious woman will stop you from leaving and introduce you to Dreamer's Doors and Mazes. She wants you to go through nine in total and retrieve the dream fragments from each one, with the first one being available in Grotty Grotto itself. These mazes are dungeons with completely random layouts, although each one has a predetermined set of floors (ex. Grotty Grotto Maze has three floors in total) and a boss fight at the end of each one.

The biggest mechanic with the Dreamer's Mazes is that there is a meter that fills up in the upper right corner, which is the Danger Level. As it raises to new levels, the levels of the monsters inside that Dreamer's Maze will also increases. You can earn pink orbs in the mazes, which can be used at statues to decrease it by one level (ex. do this at Level 2 to decrease it to Level 1); these pink orbs can also be used to open blue chests. You may also find NPCs in the mazes, which have a variety of services, such as lowering/raising the Danger Level, selling you goods, or even just giving you items.

You can work on this sidequest as you progress through the game, but it's best to wait until later. The reason for this is because the Danger Level increases quite quickly at its base value, so you'll be forced to hurry through the mazes and won't get time to explore. Couple this with the fact that you won't have use of a map at all, and things can get hairy pretty quickly. Another reason you might want to wait is because there are facilities dedicated to improving the experience with the mazes at Evermore. You can conduct research at the Dimensional Labs that will do such things as lower the rate that the Danger Level increases, get more pink orbs, and even have sensors that let you know where the door that leads farther in. 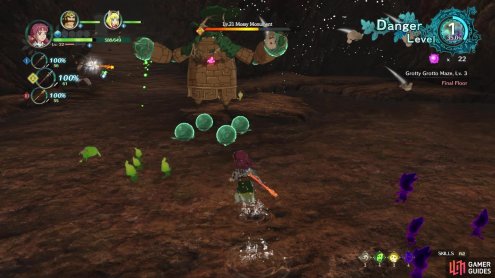 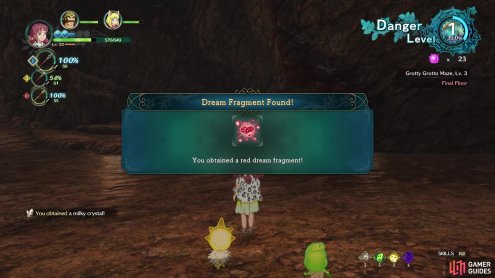 The following are the locations of each Dreamer's Maze, as well as some additional information, like base levels and the boss you will fight at the end:

It might be best to wait until after you complete the main game before tackling the mazes, as you should have all the research done in the Dimensional Labs, making things a lot easier. Once you have completed all nine mazes, you will find Mileniyah in the library in Goldpaw. Speak to her to finish the quest, recruit her to your kingdom, and also receive the key that unlocks the final Dreamer's Maze on Faraway Isle.