Higgledies are basically forces of nature that you can collect and use as help during battles. You will be introduced to them shortly into Chapter 2, where you meet with Auntie Martha, an older lady that teaches you the basics. Higgledies function as helpers during combat, as they will use their skills to buff your characters, debuff enemies and even heal your party. You will be able to equip them via the Party screen, although you are limited to four and also have to worry about their associated cost. Every higgledy has a cost and the four you can equip can’t exceed an overall cost of ten, with the higgledies falling into the range of one to three.

There’s a total of 100 higgledies in the game and you will be able to find them via two main methods. The first is from [Higgledy Stones], which are small stones in the world that require you to hand over a specific item in order to lure out the higgledy. The other method in acquiring higgledies is cooking them up at the Higglery in your kingdom. These require you to use materials you have gathered in your journey to create them, and it is this method where you’ll get most of your higgledies. 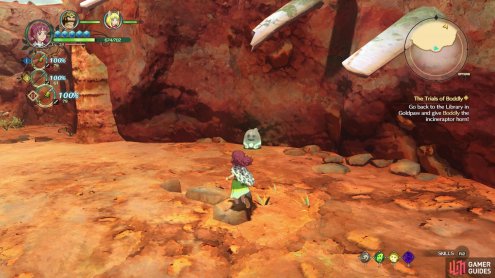 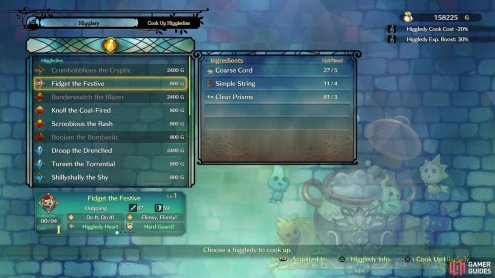 Every higgledy has two basic stats to them, Feistiness and Hardiness, which are basically their attack and defense, respectively. These two parameters will increase as they level up, which can be done at the Higglery in your kingdom. Each higgledy has a favorite item type and by feeding them this, they will gain extra experience; a higgledy will max out at level 10. Another important factor with higgledies is their personality, which seems to affect how often they will attack or use their skills. There are a few different personality types, so you will want to balance out a Shy/Cowardly type with an Outgoing one.

As already mentioned, higgledies have skills of their own, four each to be exact. You can view these skills and what they do by pressing the Triangle button on the Party screen. The first skill is usually a passive one, which doesn’t need triggering, while the second is an active skill that the higgledy will perform on their own. For the third skill, you will see that your higgledies in battle will have a circle underneath them. Stepping into this circle and pressing the X button will activate that third skill. The fourth, and final, skill only activates whenever you enter the awakening state, which happens when you collect a golden ball in combat.