Things don’t start out too well at the beginning of this chapter, with Doloran’s plan supposedly succeeding. When you finally regain control, you will need to speak with Batu and the others to hear their report. Lots more will happen, with you learning a bit about the history of Doloran and the plan of action to come. Of course, all of that can be put on the backburner, because it’s the start of a new chapter and sidequest time!

The first sidequest you might want to go after is located in Hermit’s Hollow, which is a cave in the Ding Dong Dell region; it’s north and a little east of the town. The rest of the sidequests are found in the usual places, in the towns, from Swift Solutions and finally, in Evermore. It’s always best to save Evermore until after you’ve finished all of the others, since you won’t need to revisit it later.

Whew, that was certainly a lot of sidequests, but you’re inching ever closer to the end of them all and it’s time to get back to the main story. Your current objective is to head to the library in Goldpaw to look for details of the Sword of Union. Speak with Boddly, who mentions that books from that long ago do not exist, but a stone tablet does. Head on over to the alcove with Boddly to see the strange stone, but she could never decipher the writing on it. Boddly says that maybe Li Li can help figure out what it says, so travel back to Evermore and talk with her. She can remove the encryption on it, but needs some seeing sand from the Drylands.

Note: You will get a new Leafbook posting at this time, which is Treasure Time: Part Five. It is located in the Midstream Tunnels section of the Old Well dungeon, inside of the small tunnel located in the picture. The item you receive is a High Heal Pendant. 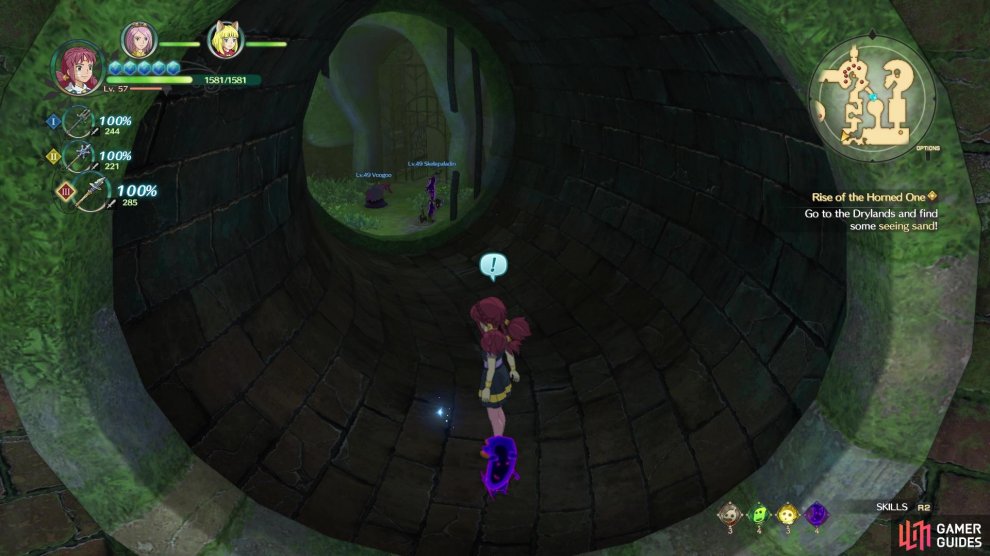 Li Li will mark three points on your map as to where the seeing sand is located. There’s no indication of an item, but walk around at each point until you happen upon an exclamation point. The seeing sand will always be located at the final location you search, so you will have to look for all three. Bring the sand back to Li Li in Evermore, then wait until she’s finished deciphering the tablet. It doesn’t take too long (there’s a short scene until it is deciphered), and you find out the location of this so called Mornstar sword, the Coldera in Jack Frost’s Playground.