Whenever you encounter enemies on the world map or in dungeons, battle will be initiated. Ni no Kuni II uses a purely action-based combat system, with one button for light attacks and another for heavy attacks. In addition to that, you have ranged attacks, a block button and you can also dodge roll. You can string together light and heavy attacks for a combo, but only if they start with a light attack; heavy attacks can never combo into light ones. Every character has a light attack-only combo and a heavy attack-only combo, then others that differ depending on when you use a heavy attack during a light combo (think Dynasty Warriors, if you’ve played the older ones).

Ranged attacks use MP, which is shown above the HP bar and you can recover MP by either using items, or smacking the enemy with melee attacks. You can also charge up ranged attacks by holding down the R1 button (default), although Roland is the only character in the game who can’t do this. Characters can also jump with the Circle button and do mid-air attacks, which proves useful against airborne foes. The L1 button is used to block, unless you use it in conjunction with the left analog stick, which will cause your character to dodge in the direction pressed. Note that you have some invulnerability frames when dodging, which can be increased further with armor skills. 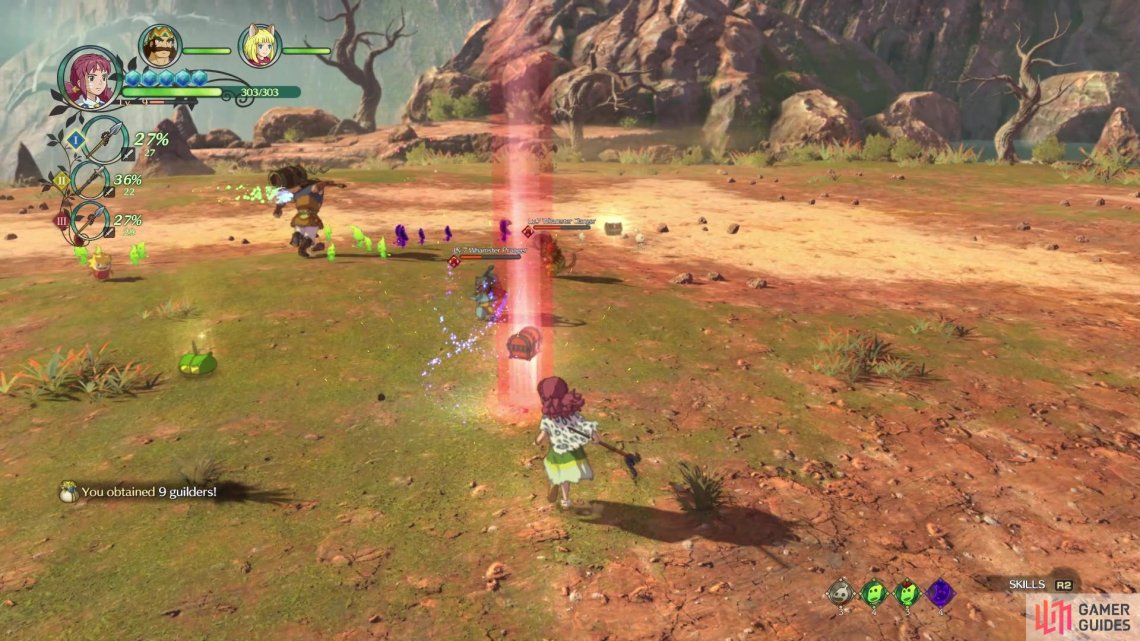 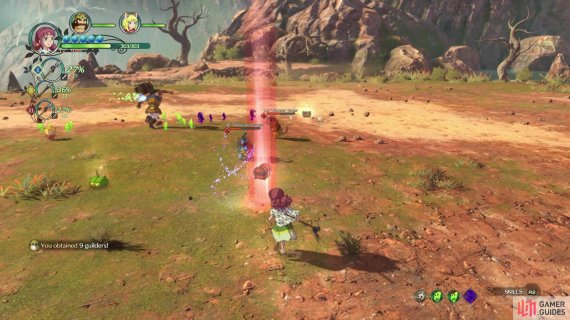 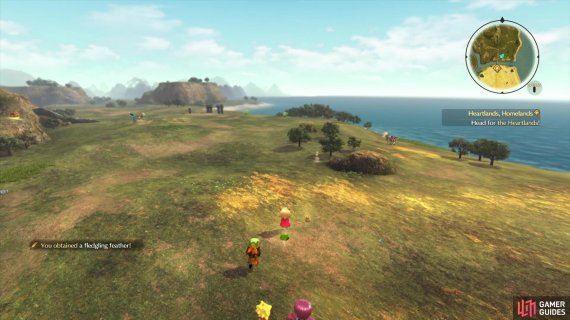 Enemies can drop chests during battle that contain new pieces of equipment (left), Loot you miss while fighting on the world map will spill out onto it after battles finish (right)

That’s a pretty good basic understanding of the battle system, but there’s a bit more. Every character can equip up to four skills, which are assigned to the face buttons (Square and the like). In order to access them in battles, you will need to hold down the R2 button and then press the corresponding face button. Depending on your Zing gauge (more on that below), skills might have different effects. You can also absorb higgledies by holding down the face button of the skill you want to power up, as long as the skill can be powered up and you have matching higgledies (fire ones for a fire skill, as an example). That’s assuming that the skill can be powered up with higgledies, which shows with the skill info at the bottom left on the screen.

Every character in the game has the ability to equip three different melee weapons, as well as a single ranged weapon. Because of there being three different melee weapons, you will have the ability to switch between them in battles. Before delving into that, let’s talk about the Zing gauge and what it does for your characters. During combat, there is a percentage underneath your weapons on the left hand side. This is the Zing gauge and as you deliver melee attacks, it will rise. Once it reaches 100% and that weapon is currently equipped, skills you perform will have some added effects. As an example, Roland’s Flatliner will have an additional vertical strike added to it. The Zing gauge will reset back to 0% after using a skill when it’s at 100%.

Back to switching weapons, you have the ability to switch between your melee weapons during combat with the L2 button, but there’s a little caveat. There are three different modes for switching weapons: Manual, Semi-Automatic and Automatic. Manual basically makes it so you only switch weapons whenever you feel like it. Semi-Automatic allows you to switch weapons manually, but it will also switch after using a skill that has full Zing. Automatic will not allow you to switch weapons at all and will only do it when using a skill with full Zing. You can switch modes in Equipment & Skills by pressing L3, or by pressing Options in combat. 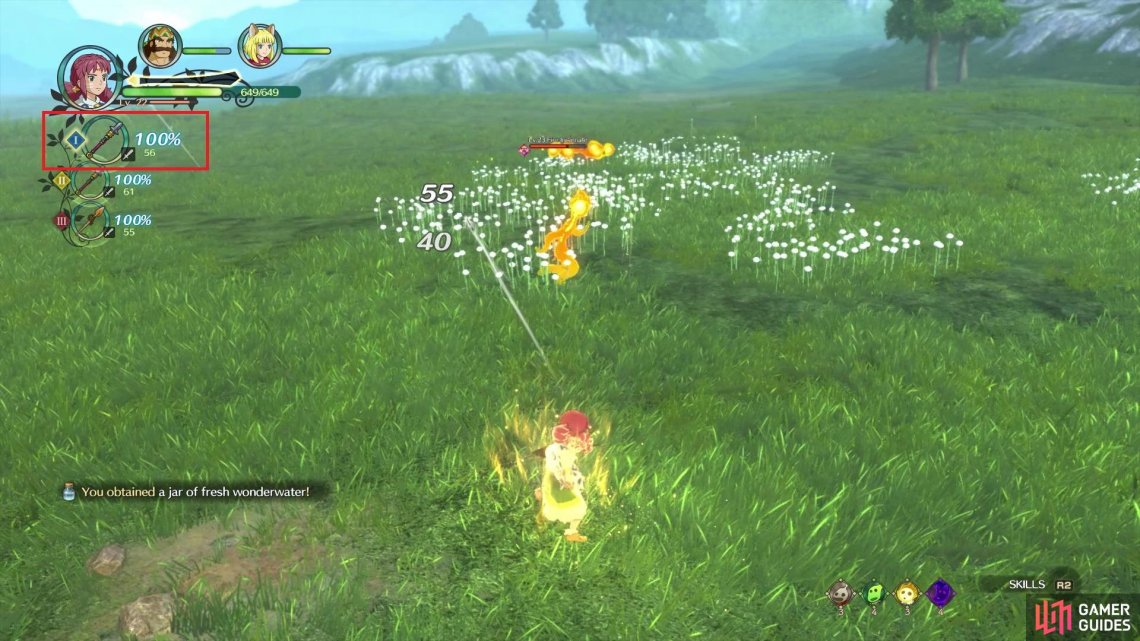 (1 of 2) Attacking enemies will increase your Zing gauge 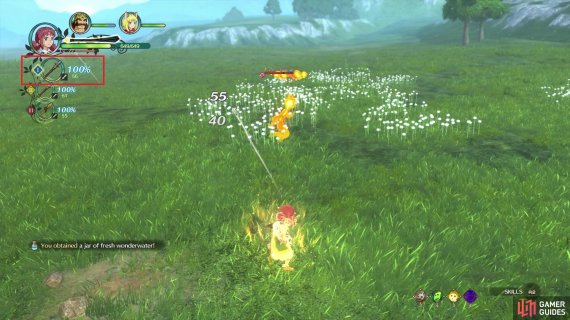 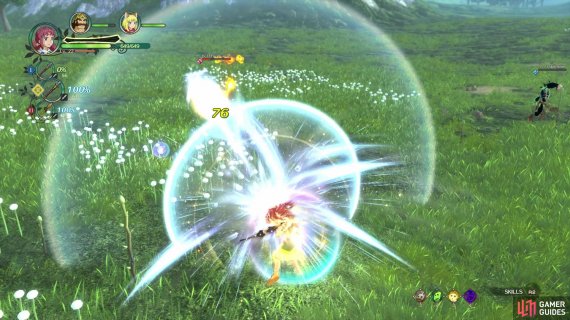 Attacking enemies will increase your Zing gauge (left), and once it’s full, your skills with have an extra oomph to them (right)

Whenever you defeat enemies or have a special someone join you in battles, you will notice that some balls on the ground, particularly of a green or blue color. Picking up green balls will restore your HP, while blue ones will restore your MP. There is one more color, golden balls, which can be thrown out by a little friend of yours, once you obtain him. Collecting a golden ball will initiate a little cutscene, as well as start up Awakening Mode. You’ll know this ball is on the field, as it will bounce around and tends to gravitate towards the character you’re controlling. Not only will this boost your attack and defense, but it also makes all of your skills use their full Zing versions. In addition, you have unlimited MP in this mode, with your MP bar replaced by a meter that dwindles over time.