144 The Dark Side of Development

A horde of particularly vicious monsters have been spotted outside of Broadleaf and with things being pretty tight with their own forces, Bracken and Evan offer up their services to take care of them. Exit to the world map and you should be able to spot some marked Quiverines to the southwest of Broadleaf. Engage them in combat and defeat them, after which Bracken will come to a startling discovery. As she delves on the subject of messing up the local environment because of developing technologies, the security guard from the beginning of the quest comes out and mentions the bandits are joining forces with the monsters.

This will spawn a skirmish flag nearby, so get ready for another army battle. The skirmish is level 54, which might be a little bit high for the moment, but you can just start it, defeat a few units, then quit to level up your troops some so they can actually do things right. At this point, you should be swimming in Kingsguilders, so you don’t have to worry too much about spending them recklessly. When you begin the battle for real, there will be a lone two sword units straight ahead of you. Take them out, then bust through the wooden fences to spawn more enemy units.

You have a few sword ones here, one of which is a Porc, as well as two ranged ones sitting in the back. Don’t charge forward too quickly and lure them back to you, so you don’t get overwhelmed. Take care of the frontliners first, then go after the ranged units. Defeating the second set will spawn a third beyond the gate, consisting of a sword unit, spear unit, another Porc and one more ranged. There are also cannons in the back, as well as two siege towers along the fence, so if you have a ranged unit of your own, get rid of the towers first.

You can actually destroy and rebuild the towers from the southern side of the fence, but the cannons will make short work of them with them doing very little. The Porc is definitely the biggest problem here, with the cannons being second, so they should be your first targets. Once they’re finished, clean up the rest, then the main bosses will appear, both of which are hammer units. Be extremely careful of the Porc, as he is level 50, but things get a little more complicated once the fight commences. 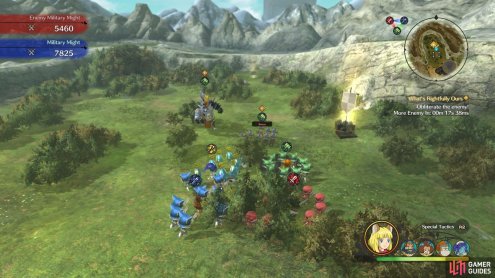 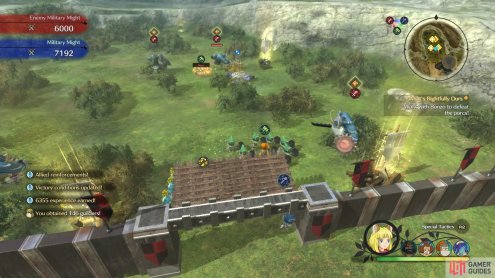 It seems the Porc leader doesn’t want anything to do with the humans, so he sets off on his own, with you and the bandits teaming up to take the monsters down. A few more Porcs will spawn at this time, all of which are sword units. The main leader will likely be distracted at this point, so clean up the others before focusing on him. It may even be that the leader will be almost finished by the time you get to him. This is the end of the battle, so don’t hold anything back, like your Shock Tactics. Once you win, then the quest will finally be over.