Helena wants to prepare some fresh fish dishes for the people at Evermore, and has decided on some Fangfish ones. However, she’ll need your help in acquiring some of these, of course, with the help of your army. Head on over to Leucippes’ Labyrinth and speak with the scouting soldier to have the skirmish flag appear, which is going to be level 25. What makes this skirmish even more difficult is that you only have five minutes to finish it, as explained by Leander at the beginning. Note that you will need to defeat six Fangfish in total, but only one is visible. That’s because the other ones hide in the ground until you get close enough to them. 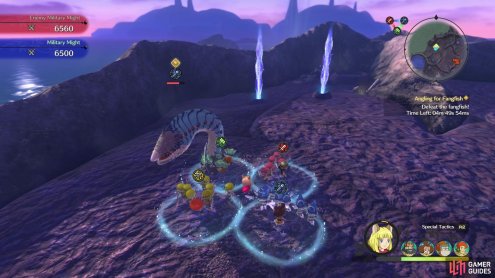 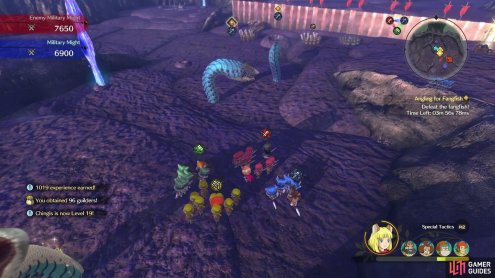 Begin by taking out the Fangfish near where you start, then head southeast to find some whamster units (1 hammer, 1 archer and 2 irregular). Defeat them if you wish, but you will want to go north of where they are located to find three more Fangfish. Quickly get rid of them, then check the pocket southeast of there for another Fangfish (the northeastern one has more whamsters). The last place for the final Fangfish is south of where you found the first one. Once you’ve defeated six, you can return to Helena in Evermore to finish the quest.