Hopefully you leveled up a bit, as you will now be switching focus to the remaining sidequests in the game. If you checked Leafbook upon reloading your completed game file, you should have noticed three new Ones to Watch posts. These three people are new sidequests and the biggest problem will be finding them. Go to the overworld in the Ding Dong Dell region and look at the map, where you should see a quest marker on the high ledge to the northeast of "Rolling Hills" on the map. The man standing there is Dekkah and speaking with him will start 160 Dekkah’s Grand Tour.

Doing this quest first will allow you to complete a few other ones, or at least getting to the point where you acquire the recipe book. In fact, you will be able to finally complete Sidequest 055, as well as two new ones you picked up in Evermore, Sidequest 167 and Sidequest 168. Outside of that, it’s best to worry about the sidequests that give you new citizens. There aren’t too many left, but you will be able to recruit all of the citizens now, which will allow you to upgrade your kingdom to level 4. While this isn’t really much of a boost like the previous ones, you do get to level specific resource facilities to their max, which will allow you to get some new items. You will also be able to upgrade your coffers, although if you’ve done everything in Evermore, you might not have much of a use in doing so. 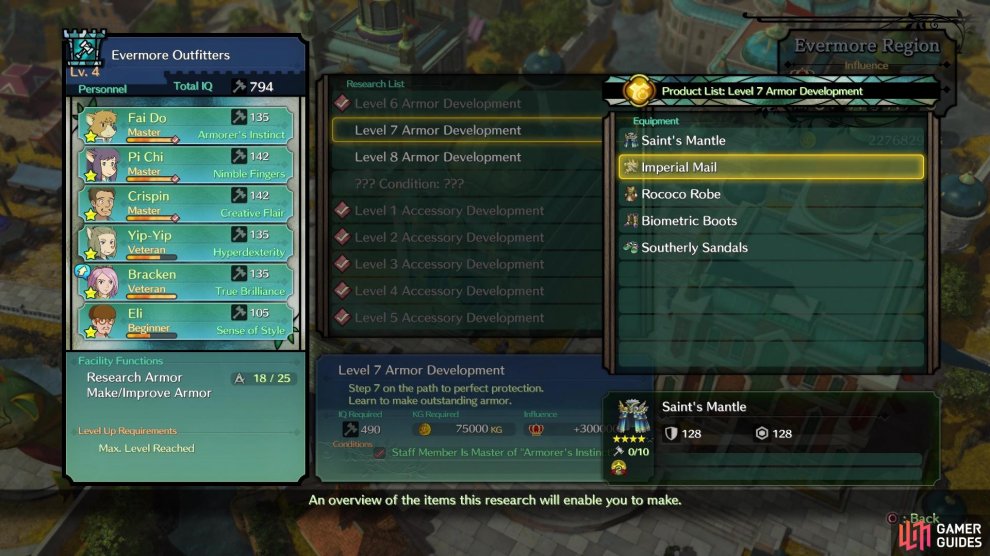 However, you also unlock the final research opportunities in the Outfitters, Weapon Workshop and Higglery. The only problem with these upgrades, as far as the equipment goes, is that they require materials from the Faraway Forest Maze. Upgrading your kingdom to level 4 also unlocks five new sidequests, each one resulting in a new outfit for everyone but Evan. Of course, these also need Faraway Forest Maze materials, so it looks like that will be your next objective. It will likely take multiple trips through the place, but for the sake of doing things right the first time, let’s take a little trip in cleaning up some other stuff first.