An Audience with the Queen

With a boat, one of the first things that come to mind is exploring the ocean and although you have a wide area to see, there isn’t too much out there, aside from some miscellaneous caves. When you first board your ship, you will get a trophy and also receive a short tutorial about the boat. Basically, you can board it and get off at any shore (you’ll see an exclamation point), plus whenever you travel to a trip door, the boat will be placed at the nearest coastline. Before you set sail on the sea, you can pick up a few new sidequests.

Travel back to Capstan to find two sidequests here, only one of which you’ll be able to complete, although it might require a bit of building up of your kingdom and crafting first, depending how much you’ve actually done. The other sidequest (037 Tiller, Long-Distance Rower) requires a consumable you won’t have access to yet, although you will be picking one up from a chest in an upcoming dungeon. There is also another sidequest in Goldpaw, but you will need at least 10,000 guilders to start it.

Note that finishing 038 will allow you to do one more sidequest in Evermore (039 above), but that will be about it in terms of those. Alright, travel to the Calmlands trip door and board your ship to the south, then follow the coastline to the north to find a cave, which is Floodfall Cave. Note that this cave is part of Sidequest 040, but there is a single chest in the final room here, which contains 5 Crimson Crystals. Return to your ship and follow the coast to the north more, to a small elevation in the water that is straight south of the Forest of Niall. 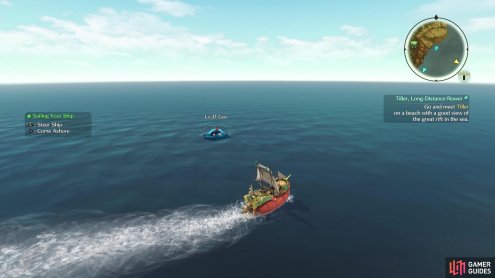 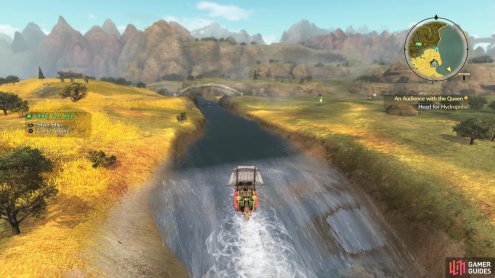 Note: You will see blobs in the water, which act as enemy groups. They pretty much follow the same rules as the ones on land, but you can research some things in Evermore to make enemies notice you less on the seas.

You can actually ride up this small waterfall and navigate your way around these rivers. To the east of the Forest of Niall is another cave, Squeezethrough Grotto, but there’s nothing of value here except for two sparkles. For the final two caves, you will need to sail to the river that is just north of Evermore. There will be a split here, with the western waters taking you to Runaway Cave and the northern one bringing you to Dugout. Runaway Cave has a level 41 Tainted Monster in it, so you’re not going to be defeating that right now. Dugout has a chest in the first western room (Strong Sixth Censer) and another chest in the southeast corner (Gloomy Hurly Handgun). Lastly, there is another Tainted Monster in the southwest, level 27 Whammity, a whamster.

Depending on if you’ve been following the guide or not, there are a few more Tainted Monsters out there for you to kill. You might have forgotten about Googah, which was on the way to the Forest of Niall (it’s southeast of the Jumblewoods). Besides that one, there is another on Starboard Isle, which is south of Capstan-upon-Hull. You will want to be extremely careful here, as the island is inhabited by level 55+ Wavewyrms, who will destroy you should you encounter one. Land towards the northern end and quickly make your way west, then south to the Tainted Monster, level 29 Quilla. This one is a hedgehound and can move around the battle area quickly, so mix in some ranged attacks. Open the chest behind it, once you’ve defeated it, for Songbook No. 4. Note that there is another chest near where you landed your ship, on the raised piece of land (Choppy Soldier’s Cloak).

That’s about all you can do right now, so start sailing over to Hydropolis, opting to land on the small island just southeast of Mikronos on the map. You will find a chest here, which has a Soreaway Sweet inside. The only other optional place to explore is Makronos, which is the huge island near. Land on the southern end and activate the Trip Door (Makronos), then look at your map to spot a Tainted Monster in the middle. Head straight up the middle to find it, which is level 37 Grimpopo, a whamster archer. The only move it will do is shoot an explosive arrow, which does hurt a lot, but you can avoid it once you know the blast radius. There will be a chest behind it that yields 1500 guilders.

If you glance around, you see that the island is composed of a bunch of coral platforms. These aren’t just for decoration, though, as you can jump on them and use them as platforms. There is a chest to the left of "stairs", which you can drop down to, containing 3 Scariwinkles; don’t forget that you need five of these for Sidequest 017. Climb up the western set of coral platforms and head north, where you can find a "hidden" area. There will be a cave back here, as well as a blue chest next to its entrance (Multiproof Roguish Boots). Coral Cave doesn’t have anything in it, aside from a few sparkles, so it’s more about putting it on the map. There’s still more to explore up here, though, so you’re not done yet. 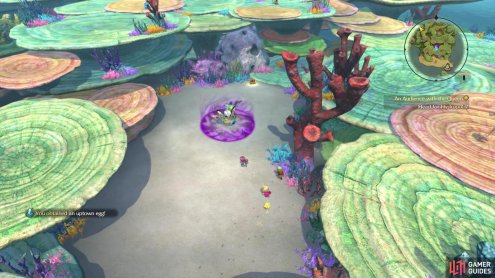 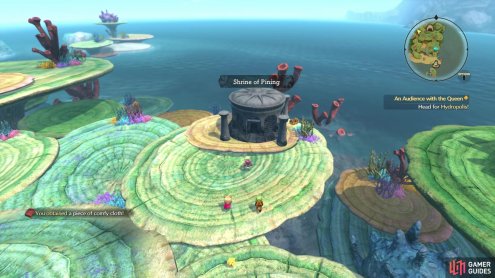 Return to the beginning of the coral stairs and look to the east to spot a path there. This leads to another mini-dungeon, the Shrine of Pining. Forgo venturing inside right now and continue north. You can go northeast here, where you can find a chest with an Antifreeze Pendant "next" to the Coral Cave entrance. Continue west, then north and east to find more "stairs," leading you to another chest with a Soldier’s Spear. On the opposite side are more stairs that will bring you to Capaneus’s Crypt. Enter it to find a chest on the eastern side (3 Milky Crystals) and that’s about all. The Shrine of Pining has a level 33 Tainted Monster named Puddley (it’s a goo-type) and a Dreamer’s Maze.

That’s enough exploring for now, so return to your ship and finally enter Hydropolis, which is just northwest of Makronos. Upon entering, there will be a cutscene, then you will be able to move. Feel free to roam the docks to find some sparkles, then when you get to the proper portion of town, you will be stopped by a guard. You’ll learn about the laws of Hydropolis, which are a bit crazy after the first two. Once you regain control, activate the nearby Trip Door (Ankura Harbor) and head inside the item shop. There’s not much for sale, but you can purchase some Three-Leafed Soreaway here.

To the north will be an eatery, then the weapon shop and Swift Solutions will be up the stairs past that. Neither probably don’t have anything you need right now, so ignore them if you don’t need their services. Oh, by the way, your objective right now is to ask around town about Queen Nerea, with people to the north, west and east. Head west from Swift Solutions to arrive at Nautes Harbor, where there will be another Trip Door (Nautes Harbor). The merchant on the northern side of this area sells scariwinkles, so if you haven’t finished 017 A Gift for Gao Jia yet, then buy five of these to finish that quest. 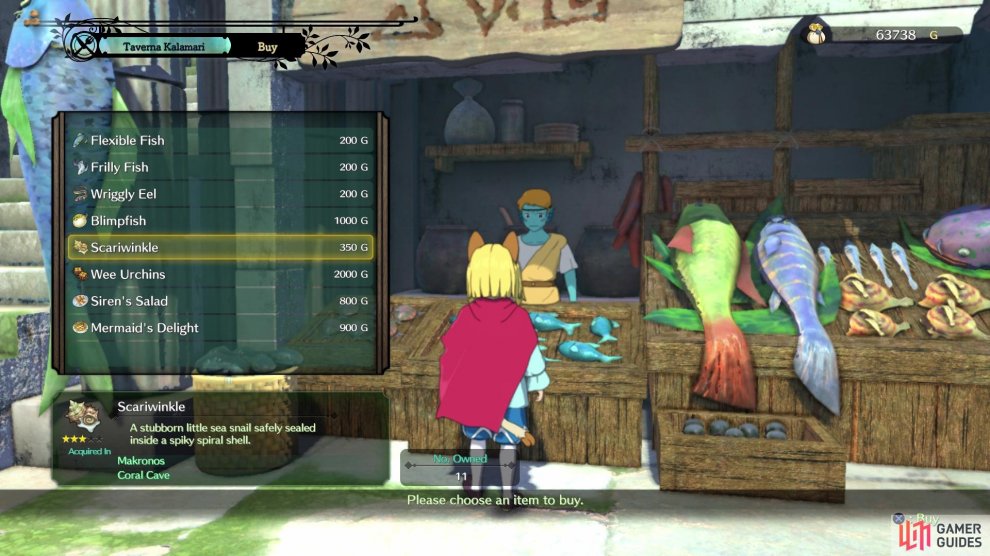 The person you need to talk to here is in the northwest corner and to the south of the harbor is a watery area you can explore, but there’s nothing but sparkles there. Head all the way back to the weapon merchant and go east this time. As soon as you descend the stairs, there will be a Trip Door (Siren’s Rest) around the corner, so try not to miss it. Continue east to the inn and speak to the old lady with the marker, then double back and head north from Swift Solutions to arrive in Kardia Square. Yet another Trip Door will be here (Kardia Square), as well as the third person with which you need to talk (what a creepy-looking eye).

Hmm, not much has been told about the queen, but you definitely learned quite a bit about this Leander fellow. So, the party plans on getting to him to get to Queen Nerea, with Lofty coming up with an enigmatic plan. Start off by going to the equipment shop, but the item Lofty wants cannot be sold according to the laws. However, there is nothing said about giving it to you, but the shopkeeper wishes for help in return. The simple task is to deliver three packages for him in exchange for the ring.

Note that this actually counts as a sidequest, but you’re forced to do it to continue the story. Start off by heading to the inn to the east, as that is where one delivery is; the man is sitting at the table. The second delivery is to the south of the equipment shop, to a man just outside the item shop. As you can see from your map, the third delivery is in the southwest, but you need to take the long way around. You’ll first have to venture to the Nautes Harbor and then head south from there. Once you’ve delivered all three packages, return to the shopkeeper to get your Adore Ring and finish the sidequest.

The game will take over here with some scenes and you will finally be able to meet not only Leander, but also Queen Nerea. When you regain control, go ahead and speak with the queen. She will sign your treaty, provided you do a favor for her, which is to go to some labyrinth and defeat a creature named Cetus. To help you with this endeavor, the queen will have Leander accompany you. Return to your ship and board it, then set sail to the southeast to get to Leucippes’ Labyrinth.