031 Bandits at the Border

It seems the one bandit you fought earlier in the game, Tyran, is back for more and wants his territory back from Evan. Note that this is a skirmish and it is level 19, so you will likely be underleveled with your own units. However, you can start the skirmish, kill a few enemies, then press the Touchpad to go to your map and abandon the skirmish. While you see a game over, your units will retain the experience they gained in the previous battle, so you can level them up a number of times this way before you actually try and tackle the skirmish for real. Once you've accepted the quest from Chingis, head onto the world map to find the scout slightly northwest of Evermore.

The set of troops will consist of Tyran himself, who is a hammer unit, as well as another hammer, two spears and two irregular units. Keep an eye out for when the enemy switches units out, and cycle from a sword unit to a hammer one. Cross the bridge to find a lone unit, then two swords and a hammer past the barricades. Note that there is a cannon in the area with the three units just mentioned, so avoid its fire until you can take it out after. As you approach the second set of barricades, Tyran will show his ugly mug again, with three hammer units, two with a shield icon and a bow one. 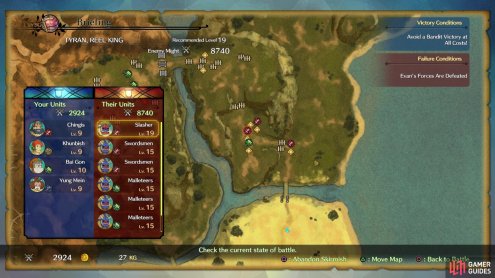 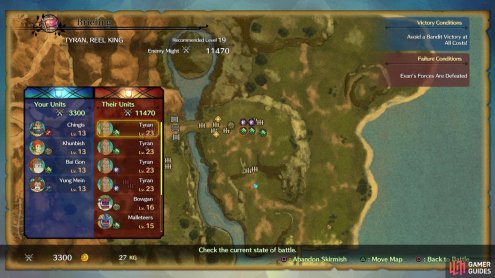 You can keep a sword unit in front to quickly defeat the hammer ones, then switch to whichever you want to slowly whittle down the other units. Feel free to use Shock Tactics here to make things go a little quicker, especially at the beginning, as it's highly likely you regain it before moving on to the top. When they're gone, destroy the two towers to make Tyran retreat again. The final area will be especially dangerous, as you know who reappears, consisting of two hammer and two gun units. There will be another two hammer units, a spear unit, then an irregular one, along with two cannons.

The best thing to do here is try and lure enemy units away from the bigger crowd, while avoiding the cannon fire and Tyran's main units. Once the numbers have thinned down, skirt around Tyran to destroy the cannons, then go after his main unit. Don't be afraid to retreat if things get too hectic, as it will give you a chance to regroup and get some units back. When you've finished off everyone, the skirmish will be over and so will the quest.