Capstan is located to the south of Goldpaw and is actually a vassal of the city, so things should hopefully go smooth in procuring a boat to reach Hydropolis. You’ll begin in Evermore and if you’ve done all other sidequests in the previous chapter, then there should only be two available when you head out into the town. Both of these are skirmishes, high level ones to be exact, so you might want to put them off for now. However, there is a little trick you can use to help bolster your forces some. You can start the skirmish and try to defeat a few units to level up your own, then abandon it. While you’ll see a game over screen, your units will still retain their experience from the previous encounter, so your army will get a nice boost in levels. Using the above trick, you should have no trouble completing both skirmishes from the sidequests, should you wish.

There are plenty of other sidequests available in the world, so let’s take a trip. First, visit Auntie Martha’s Cottage and go inside, where you’ll find a young girl by the name of Alice, who happens to have a sidequest. She thinks you’re a stranger and in order to convince her you’re not, she asks you what Martha’s favorite food is. Teleport to Evermore and speak with Auntie Martha in the town to learn it’s Country Corn Soup. In order to make this, Floyd’s cooking level needs to be level 2, so make some other dishes if it’s not. Once you have it at level 2, make Country Corn Soup (1 Loonycorn and 2 Fresh Milk) and show it to Alice back at the cottage to finish the sidequest. Note that you should have Loonycorn from finishing Sidequest 020. 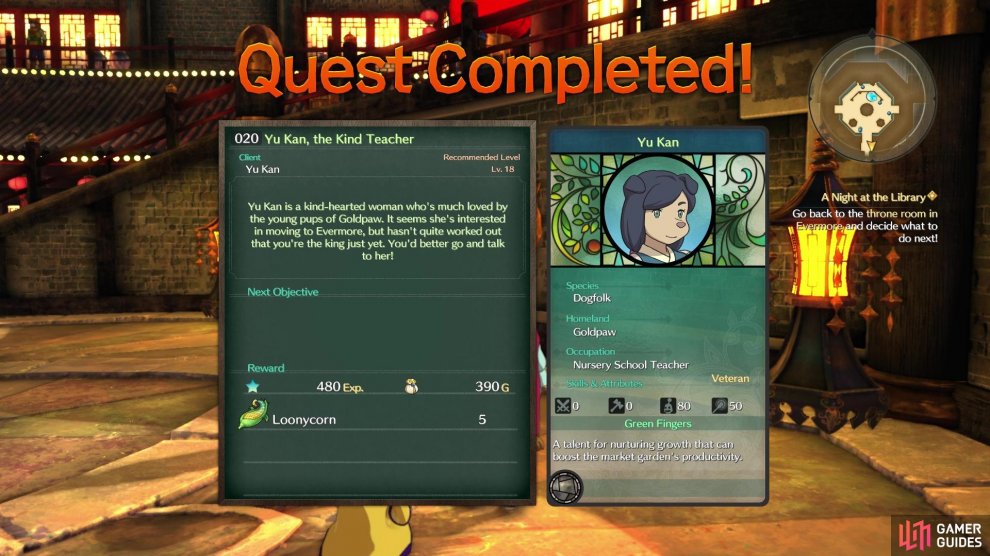 Recruiting Alice will make two new sidequests appear in Evermore, one from Alice and another from Martha, who are both by the Higglery (or should be, since they will likely be stationed there). Also, Alice should be citizen number 25, which means you will be able to level up your kingdom. This costs a total of 5000KG and will not only open up a bunch of new facilities to build, but it will allow you to upgrade some of your existing buildings. You will also be able to expand your coffers, meaning they can hold more KG before they will be full. In fact, you can expand your coffers to level 4, although that requires a lot of influence and KG.

Head on over to Goldpaw next to find more sidequests, with there being a total of six here. You’re going to be concentrating on 024 Miss Henny’s Misfortune for right now, as it leads to another sidequest in Evermore, plus you’ll be visiting the Forest of Niall, where you can pick up yet another. So, Evan’s old tutor, Miss Henny seems to be in trouble, as she went to a place where wolves are on the prowl. Teleport to Greenling Grove in the Forest of Niall and first speak to the Brusque Greenling right outside of the Sunnypatch Pond entrance to pick up a sidequest.

Directly east of there will be a dead end on your map, which is where you’ll find Miss Henny. She’ll be surrounded by some whamsters and hedgehounds, and as you approach, you will have to fight them off. They are all around level 27, so they shouldn’t be too much trouble. When they’ve been defeated, Henny will be safe and will actually head to your kingdom, finishing the quest. Travel back to Evermore to find Henny is there, with another sidequest. This one is a bit more involved and you likely won’t be able to finish it at this point, but it’s always nice to have.

You’ve already picked up Muuurielll! from the Greenling in the Forest of Niall, which will direct you to some place called the Jumblewoods. If you’ve been following the walkthrough, then you’ve already been here and there was even a trip door. If not, then it is a mini-dungeon located southwest of the Heartlands. As soon as you enter, Muriel will be right there, but she won’t leave until she finds her llapaca. Depending on your levels, the enemies here are blue in color, meaning they won’t bother you unless you run into them, so you can safely ignore them all. Paco will be in the first big area to the southeast, in the southwest corner. As soon as you find it, you’ll automatically return to Muriel and the quest will be over.

Return to Evermore to find Muriel there, with another sidequest for you. This time, she wants five fine-grained lumber. You won’t be able to get this from sparkles yet, but if you level either the Branching or Spreading Lumberyard to two, then it is possible to get the fine-grained lumber from those (after you assigned people to them). If you feel like waiting for a chance at those, go ahead, but this guide will be moving on right now. 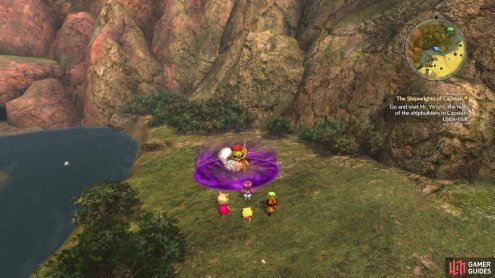 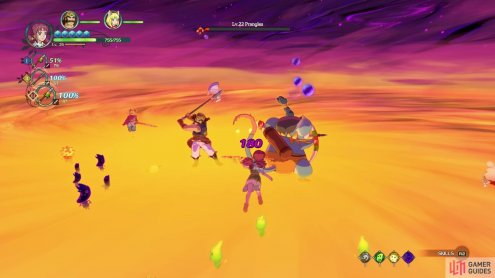 Exit Evermore and go onto the world map, where you’ll want to head west and across the bridge just to the northwest. There will be a Tainted Monster just across the bridge; its name is Clangston and is a level 23 whamster. This monster is very simple to fight, as it seems to only charge straight at you rarely, typically after raising its shield. After defeating it, head northeast to find Spineshiver Grover. Enter it to find another sidequest waiting for you, from a grimalkin named Moggie May. Feel free to do it if you want, but the story will be continued after a brief spiel about building up your kingdom.

Building Up Your Kingdom

With your kingdom at level 2, you have a lot of choices in regards to facilities and research. You can upgrade the Outfitters and Weapon Workshop facilities, which allow you to research more powerful equipment options. One thing you should concentrate on is leveling Evermore Spellworks to three, which unlocks a very important non-battle spell, Spring Lock (Spirit Medium will also help later on). This lets you open up those blue chests you’ve been seeing across the world, and it really shouldn’t take too long to get to the point where that research unlocks. 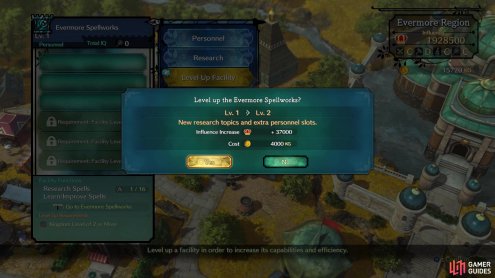 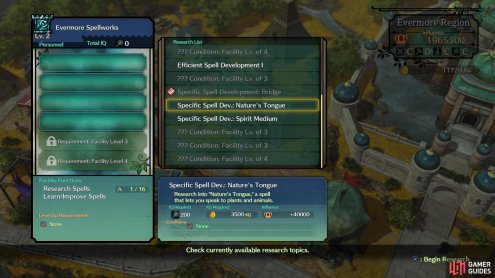 Other than that, you probably want to upgrade the Explorer’s Guild, as there is another Store More Stuff research, upping the stores to 150 items. This will come in handy, as there are plenty of new resource gathering facilities, two more for each type. You might want to level up and restrict your citizens to these new resource facilities, due to the new items from them. One facility that the level 2 kingdom does allow you to build is the Basic Training Ground, which helps improve the amount of experience you earn overall, across four different types (normal battles, skirmishes, citizens and reserve). Aranella Square allows you to make the Institute of Innovation, which lets you research some upgrades that help with kingdom mode. Lastly, the Dimensional Lab will help later on in the game, once you start doing the Dreamer’s Mazes.

Author’s Note: The guide will continue on as if you unlocked Spring Lock, meaning the contents of the blue chests will be written.