You’ll receive some new tutorials here in the ruined hallway, such as pressing the Touchpad to access the in-game menu, where you can check out a few options, although the majority of them are not available right now. Items and Quests should be self-explanatory, while Library lets you look at your game stats and the Help section. There are a variety of stats to look at in the Library, such as game time (put more here).

When you’re ready, follow the path into the next hallway, where you will encounter three more guards. You’re introduced to locking on here, which is done with the R3 button (click in the right stick), and once you’re locked on you can switch targets with the left/right inputs on the directional pad. Continue down the hallway after vanquishing your foes, until you happen upon an outside garden-like area. As Evan points out, the guards in red are elite ones and you should avoid them since it’s only you and him.

To do this, the game will switch to some stealth, with you using the shrubbery as cover. You can sneak by the first two guards without any trouble, but the next opening will have a single guard patrolling back and forth, so you will need to time it so you move past when his back is turned. You can keep going right past the third set of guards, but you’ll need to stop again for the fourth, and final, set. Wait for the grey-helmeted guard to turn around, then the final red one will turn towards you when you get close. Stop and wait for him to finally turn his back, then quietly move on by and to the door to finish up with this little segment. 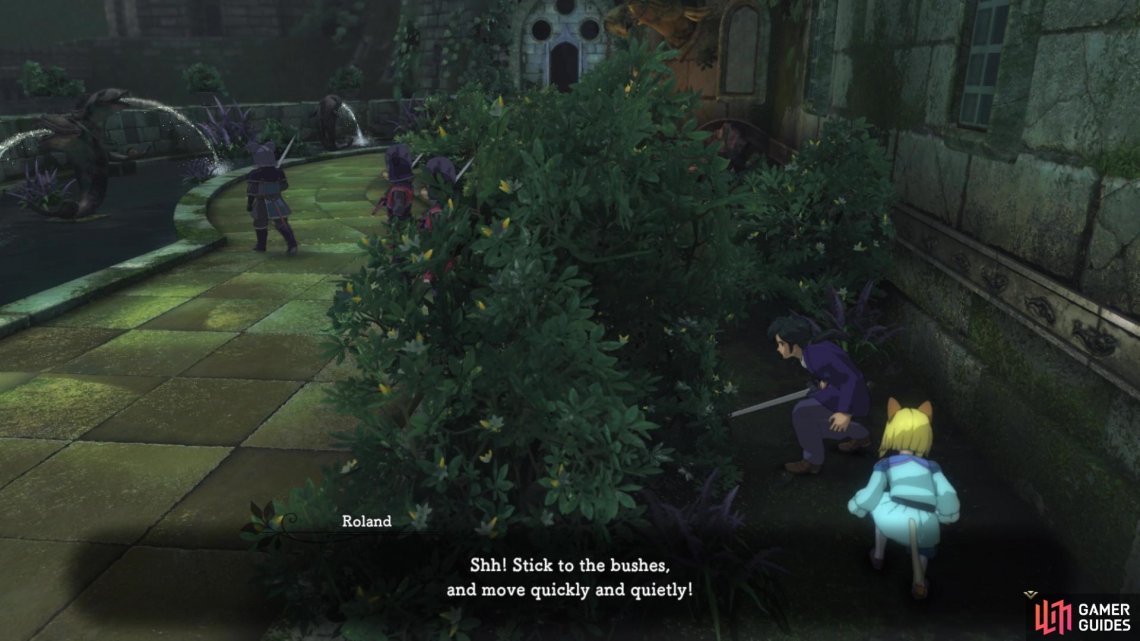 (1 of 2) Stick to the bushes to avoid being seen 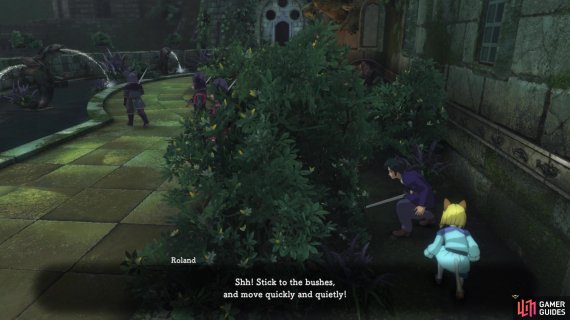 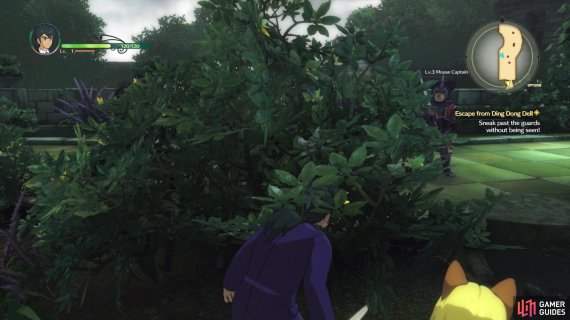 Stick to the bushes to avoid being seen (left), being careful to stop when guards look your way (right)

While on your way to the next objective point, you’ll see a little thing on the side that tells you to press the Option button to open up the map. It should be mentioned that your next objective is always shown on the map, so it will be hard to actually get lost in this game. You are always free to explore as your own leisure, but you’re not going to find much in the castle. Note that the map function does not work in battle. Descend the stairs ahead of you and in the next room, you will be forced to battle another group of guards.

You’re taught about the blocking function here, which was covered briefly in the combat section on the previous page. Considering you are fighting the same guards from before, you likely don’t need to worry about blocking and even if you get hit, it’s not going to be for much damage. After finishing the fight, a second wave appears and this one will have a sorceress in it. Like any sane caster will do, she will sit back and fire spells off at you, while the guards will keep you busy in melee range. Fight the guards as normal, while keeping an eye out for a fireball with your name on it.

Not long into this battle, though, a cutscene will occur and you’ll have a new ally, Evan’s friend and bodyguard, Aranella (Nella, for short, as Evan calls her). Thankfully, Nella took care of the sorceress, but not before she could conjure up two Skeleplasms. These enemies are a bit more formidable and hearty than the guards, so the game uses this opportunity to teach you about evasion. The logistics of it was covered on the previous page, but as a quick reminder, press L1 in conjunction with any direction on the left stick to roll in that particular direction. You will definitely want to start using your evade technique starting at this point, as you will take unnecessary damage from enemies if you just mash the attack buttons. 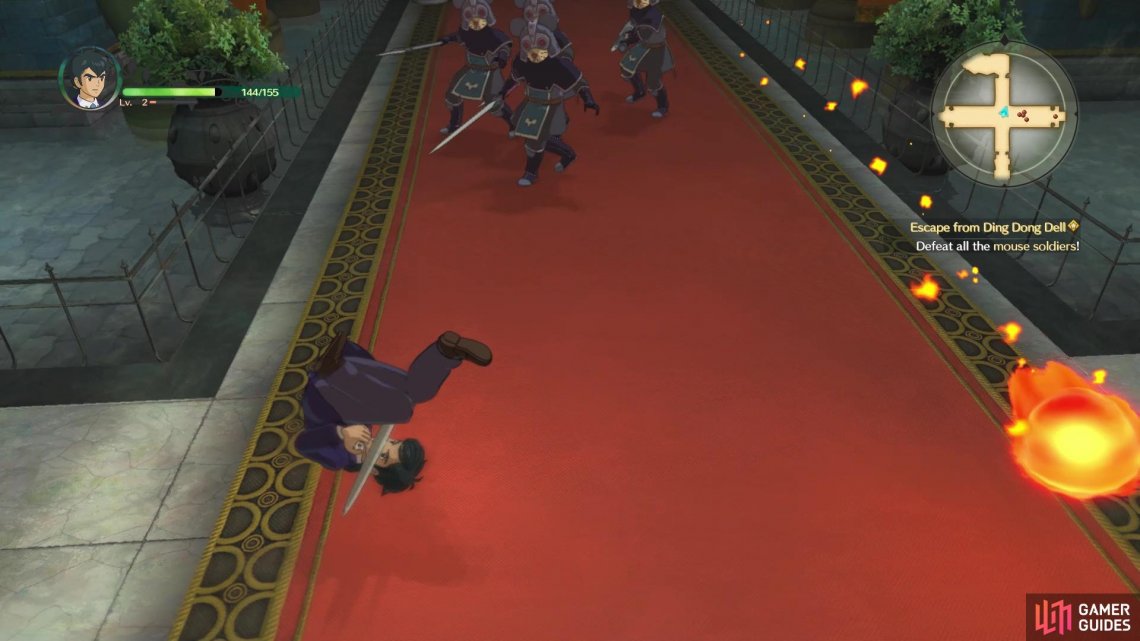 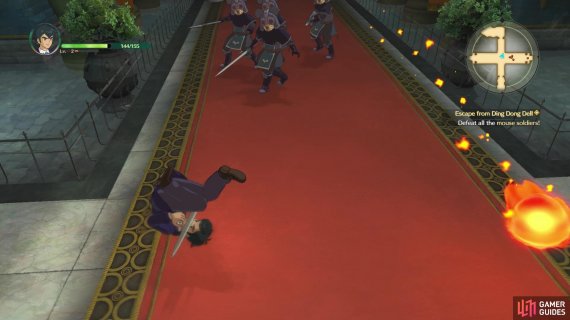 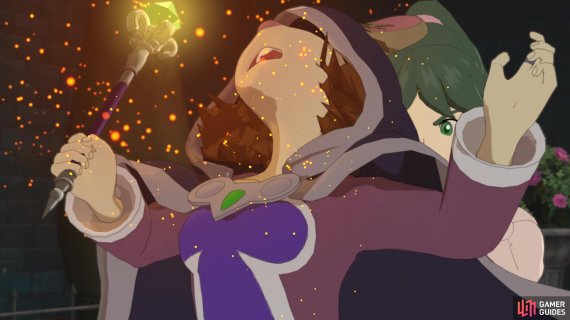 Evading is a important skill to have in battles (left), You’ll get some help in dealing with the sorceress (right)

Once the battle is over, Nella will update Evan on what’s happening in the castle, as well as mention that there are some sewers nearby that we can use to escape. Of course, the entrance is hidden and you’ll need to find it.