118 Building Up to an Attack

Gao Jia has reported that some construction noises have been coming from the kingdom’s borders, but when the noises were investigated, nothing was found. Worried that something sinister might be going on, Gao Jia has sent a unit to go investigate it further. Speak with the scout, who is not too far northwest of Evermore, which will spawn a skirmish flag. This one is level 44 and depending on your units’ levels, you might be able to win it at your current level. If not, remember that you can always fight a few units to level up, then retreat and do it again until you feel comfortable enough.

There will be a lot of siege towers and cannons in this skirmish. In fact, you will start with five towers immediately to your west, so you will want to approach them from either the north or south to minimize their attacking range. Once you’ve taken them down, you can move onto the next set, which is another five siege towers and two cannons behind those. It might be best to get behind the towers and take out the cannons first, as their range is a lot larger than the towers. If you feel overwhelmed at all, then make sure you retreat to recover your troops. 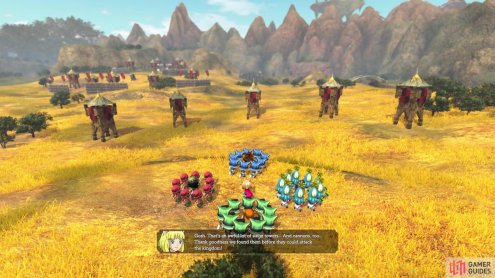 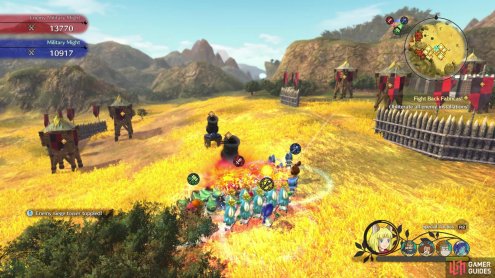 Another good idea, after you’ve dismantled the second group of siege towers, is to rebuild the two cannons you destroyed to help you with your dirty work. This will distract the cannon in the third set of artillery, allowing you to sit back and relax a little bit. Of course, the AI for the cannons will make them target the closest thing, so they will likely focus on the wooden walls before anything important. Pass through the gate to get at the third set of towers/cannons, then go the back way to get the last ones. Note that the one cannon on top of a hill might require you to rebuild a tower or cannon in the area to get it down faster.

With all of the artillery out of the way, all that is left is Fabricas himself, who is nowhere to be seen. As soon as that is said, though, Fabricas will appear right next to you. He will be comprised of two shield units and two ranged ones, so you don’t have to worry about using incorrect units here. Pound him down to size and the battle will be over, so report back to Gao Jia in Evermore to finish up this quest.