Before Evan asks for Ding Dong Dell to sign the Declaration, he wants to see how the people are faring and what they thought of his father. After that, you learn the plan for infiltrating the town, which seems simple enough. Of course, being the beginning of a new chapter, you probably know that there are going to be quite a few sidequests to do. As usual, there will be a mix of sidequests throughout the major towns, as well as one or two outside of those towns, then some in Evermore and Swift Solutions. One particularly annoying quest is Sidequest 117, which might prove to be a fairly big grind, depending on if you found some boots with the "Stinky" prefix or not. If you do it now, then concentrate on Dreamer’s Mazes, or you could simply come back to it later. It isn’t blocking progress to any other sidequests, nor any trophies or citizens.

Once you’ve finished whatever you can do, it’s time to return to the main story. The plan is to land as close to Ding Dong Dell as possible, away from the patrolling guards. This spot is north and a little east of the actual city, which is of course marked on your map. Land at the marker, then venture a little more northeast to find a cave called Hermit’s Hollow. There’s nothing inside, but it’s always nice to have it marked on your map. If you go west and then south, you should see Ding Dong Dell, but why not collect a little treasure and advance a sidequest on the way. 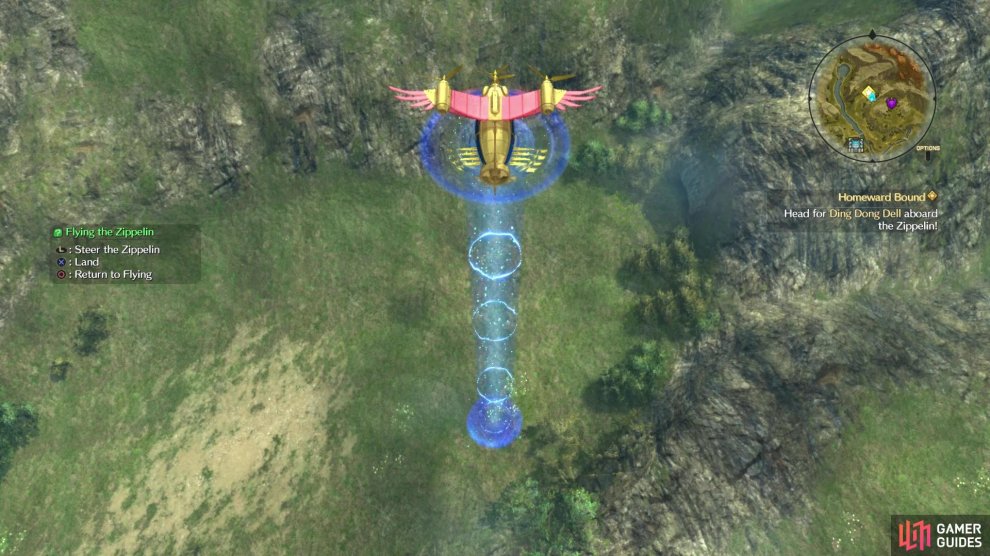 Head west to the river, then follow its bank to the north. When you reach the northern end of the river, you should see a blue sparkle on the eastern side, near some trees. This is the honey apple for Sidequest 116 (assuming you started it), so pick it up. Just northwest of the quest pickup will be a chest, which contains a set of Multiproof Restoration Robes. Go around the bend and follow the western riverbank south, opening another chest along the way (Four-Leafed Soreaway). Continue until you reach Ding Dong Dell, where you’ll want to approach the western side for a short scene. Evan will use the Mark of Kings to open the Kingsway, granting access to the city.

Upon entering the city, you will view a short scene, then you will be able to explore. You won’t find much, other than the odd shop and plenty of sparkles, and you will be required to speak with three specific people here to advance. From when you retake control, look northeast to find the first person. Continue north, as if you were going to the castle, but turn west as soon as you climb the stairs to find a Trip Door (Ding Dong Dell Castle). Double back the way you came and head all the way to the southern half of the map, where you will find another Trip Door right by the inn (Cat’s Cradle).

The second mousefolk you need to speak to is right next to the inn, and the final one is to the east, by the weapon shop. After speaking to all three, a short scene will trigger, then you will have to talk with the shop assistant at the nearby Hootique. She will want you to deliver the sardine sandwich to a grimalkin by the name of Shadow. Head towards the inn to the south and you will find him cowering near a tree. After a short conversation about the state of the grimalkin in Ding Dong Dell, return to Crumbles to get rewarded with a sardine sandwich yourself. This will trigger another short scene, where you now need to find a way into the sewers.