Beginning right where you left off, you will need to interact with the Lady Luck statue right in the middle of Fortune Square. Walk up to it and inspect to start a scene, with you having to return to the Forest of Niall after it’s over. Teleport to Sunnypatch Pond and speak to Niall, who will teach you the Quicken Growth non-battle spell. If you explored the forest thoroughly earlier, then you should remember some small mushrooms that said they could grow larger upon inspecting them. 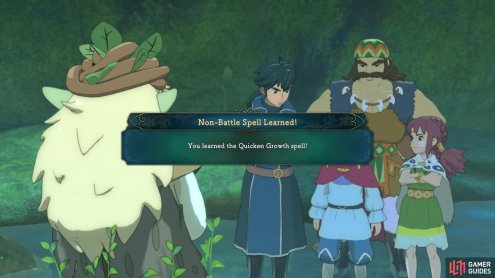 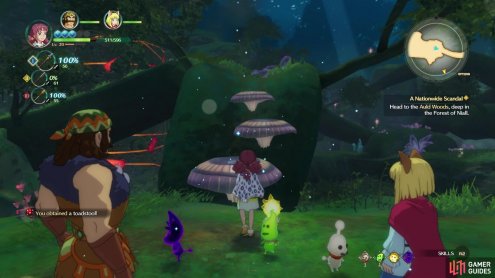 These are in the southeastern corner of the map, so head over there and inspect them again to have Quicken Growth cast on them. Jump on the enlarged shrooms and follow the path shortly to a fork. The eastern one leads with a dead end with nothing but sparkles, while the northern will allow you to delve deeper into the woods. There will be another fork shortly after that, where the southern path quickly ends with nothing of value, while the open area has some enemies waiting to scrap.

Follow this open area to the southwest, where you’ll encounter some more mushrooms that need growing. Jump to the top, with the aid of the mushrooms, then head west to a dead end to uncover a chest (5 Lumpen Lumbers). Continue east, past the southern trail, to another dead end and another chest (Punishing Wolfram Sword). Now take that southern trail, turning south again, and follow it until you come to a Trip Door (Auld Woods), a waystone and a treasure (Sixth Censer).

Beyond that will be some sort of industrial building, where a scene will happen once you get close enough. Well, it looks like you’ve gotten two disguises, so Evan and Roland will be able to sneak into the dice factory. You will need to find two pieces of evidence here, as Roland says, which is coincidental, as there are two rooms. Start with the western room, where the evidence is on the table in the back; it’s the small cylindrical object (Remote Device). In the eastern room, the item you need is on a small shelf in the back corner of the room, the one with the books (Signed Instructions). Exit the factory to initiate a scene, where you’ll have to face a boss.

This boss is fairly simple and probably won’t take too long to defeat, but you will want to be careful, just in case. The boss has a three-hit melee combo, with the first two hits being normal punches and the third consisting of it spinning around. It can also muster its strength and charge forward, so be wary of having to dodge that. Lastly, it also can fire projectiles, so you will want to keep moving. There’s really not much more to this boss, other than heal if necessary, dodge its attacks, and strike when the opportunity arises. You will receive a Watery Barrage Bow as a spoil from the boss. 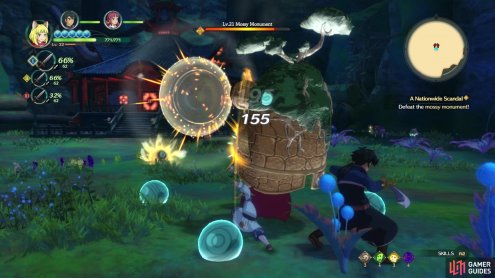 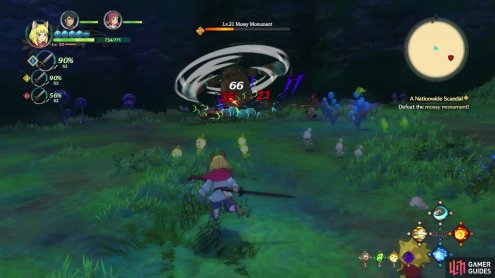 Before you leave to return to Goldpaw, check out the area where you fought the boss to find a chest on the western side (Elite Sorcerer’s Ring). Also, in the northeast corner is a higgledy stone, with it asking for some kind of mushrooms. Specifically, it wants some Gunkshrooms, which is one of the sparkle items you can get in the forest. Hand it over to get Mutton-Bane the Mushy to join you on your adventures. Teleport back to Fortune Square and present the evidence to Pugnacius, which triggers a scene and when you’re ready (save if you want), speak with Mandarin (his assistant) to begin the trial. This will lead you straight into a boss fight.

There will be a short tutorial at the beginning of this fight, teaching you about the realmwrecker and its weak spots. Basically, wherever you see balls of energy on these kingmakers gone bad, that is where you will want to attack them. Unfortunately, as soon as the battle begins, Longfang will jump back and will be out of melee range. His initial attack will be to rain rocks down on you, sparking another tutorial, this one about higmakers. These little creatures are similar to higgledies, but they are unique to realmwrecker fights. Destroy the rocks that Longfang drops into the arena to spawn the higmakers.

When enough have appeared, then a gold circle will appear on the ground. Step into the circle and press X to summon a barrier that will protect you from all fire damage. Now, onto the battle, Longfang will have two different methods of attack, one when he holds onto the battle arena and another when he’s at range. At the arena, his paws will be on it and you will want to attack these, preferably the one with the weak spot showing. He can pick these up and slam them into the ground, but this is done fairly slow, so it’s not too difficult to dodge.

He can also breathe fire on the ground in front of him when he’s up close, which pretty much covers the entire length in front. Throughout the battle, Longfang will still jump back, but he has more attacks than just dropping rocks. When he roars, fire will spew from the craters in the ground, so you will want to avoid standing near them. Pretty much the final attack is that the boss will fire a large beam of fire, but this only goes down the center of the arena, so standing to the sides will make it very easy to avoid.

How do you defeat Longfang then? Well, hitting those weak spots, as shown at the beginning, is the best way. If you deal enough damage to the weak spot, then Longfang will reel back and fall to the ground. He will not be attacking and you can freely smack his head, which should deal even more damage than to the weak spot. He will stay down for a good while, so you’ll be able to get a good amount of damage in before he gets back up. You can still hit him anywhere else, but you will do the maximum damage on his weak spot and then his head when he’s stunned. 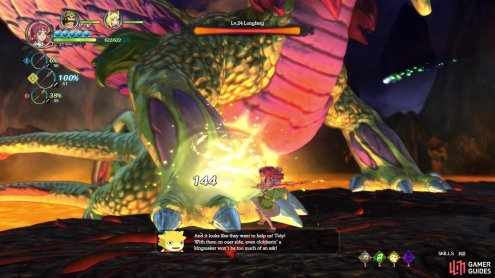 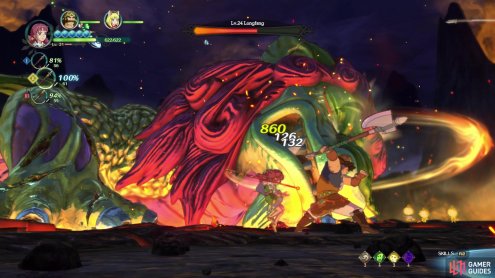 Niall Gets Back His Forest

Story scenes will happen after finishing off Longfang, resulting in Pugnacius returning the forest to Niall. Teleport back to Sunnypatch Pond in the Forest of Niall to tell him the good news. You will learn of the Horned One and who might be controlling this beast. With that known, it’s time to direct the attention to actually building the new kingdom. The kingdom of Evemore, which doesn’t sound all too bad.