The Tactics Tweaker is a magical stone tablet that is unlocked towards the end of Chapter 2, which will allow you to enhance your basic gameplay. It is separated into four different sections, with each one dedicated to one of four gameplay elements. You will need to spend Battle Points in order to unlock points that you can assign to these sections, which are earned as you level up your characters (one per level per character). Once you have the sufficient amount of Battle Points, highlight one of the sections and press Triangle to assign the points to that section. 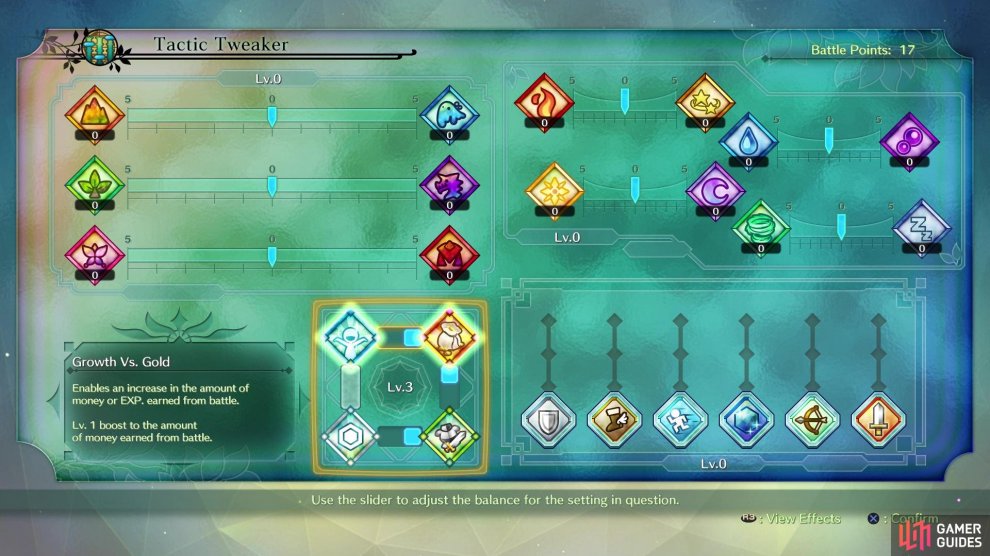 Important: The maximum amount of Battle Points you can ever have is 300, so if it looks like you aren’t earning anymore, then you have reached this maximum.

The top left section deals with Monster Affinities, which allows you to increase the amount of damage to specific types of enemies. There are three sets of sliders, with each set having two different enemy types. You will only be able to adjust the sliders towards one of the two enemy types a total of five times, so you won’t be able to have extra damage against everything. The following are the enemy types, from left to right and top to bottom, along with their in-game description:

– Solid-bodied foes are creatures such as golems or combat droids whose bodies are made of sturdy substances like rock, brick, and metal.
– Slimy foes are those with goopy, gloopy bodies or body parts, such as goos and skeleplasms.
– Natural foes are those who bring to mind the creatures of the woods and plains, such as hedgehounds and zapwings, and also those who resemble plants and other wildlife.
– Reptilian foes are creatures with dragon-like features, ranging from wyverns all the way up to the enormous entities known as windwyrms.
– Beautiful foes are the fairies, fay-folk, and other ethereal entities of the world. They include petalias and the elements incarnate.
– Brutal foes are generally humanoid in shape, but are characterized by a passion for violence that knows no bound. They include whamsters and porcs.

The top right section will have you deciding between increasing resistances to either elemental damage or status ailments. Similar to the Monster Affinities, you have sliders that can go up to five levels, with there being a total of four options to put points into, choosing one of two options for each one. From top to bottom, the options are fire vs. befuddlement (confusion), puddle (water) vs. poisoning, bedazzlement (light) vs. blackness (dark), and scirocco (wind) vs. sleep.

The bottom left section deals with the benefits received from beating enemies, or spoils. Unlike the sliders in the previous two sections, you have four options here in a square shape, where you can pick one thing over another. Whenever you activate one of the sides, you can set the slider to either be in favor of one option or the other (ex. Experience vs. Money). The section is set up in such a way that you can put two things on a single type (you can actually put two things on two types, in opposing corners). The four options you have are experience, money, rare materials and equipment dropped by enemies.

The final section, in the bottom right, will improve the entire party’s abilities in battle. You will have six options here, with none of that either/or situation as the other three sections. Each choice has three levels you can put your points into, and you don’t have to worry about picking one thing over another. The following are the options for this section, along with a short in-game description of what they are: