There will be a waystone as soon as you enter, so use it to replenish your HP/MP and save, if you wish. Continue north, collecting any sparkles along the way, and unlock the Trip Door (Sidewinder Gorge). Check out this small area here for some more sparkles, as well as a chest along the the eastern end (300 guilders). The only path that delves deeper will spark a cutscene with a grimalking merchant, who will hand over a Leafbook Viewer, this world’s version of social media, for free! That was quite nice of him, so why not check out his wares to see he is selling basic items. It might be a good idea to purchase some Soreaways or, depending on how much money you have, an Angel’s Tear (revive item).

Note: As you adventure, you might get some Leafbook postings, which will show up on the left side of your screen. Press L3 to view these new postings. Otherwise, you can check Leafbook by going into the Library option of the in-game main menu. 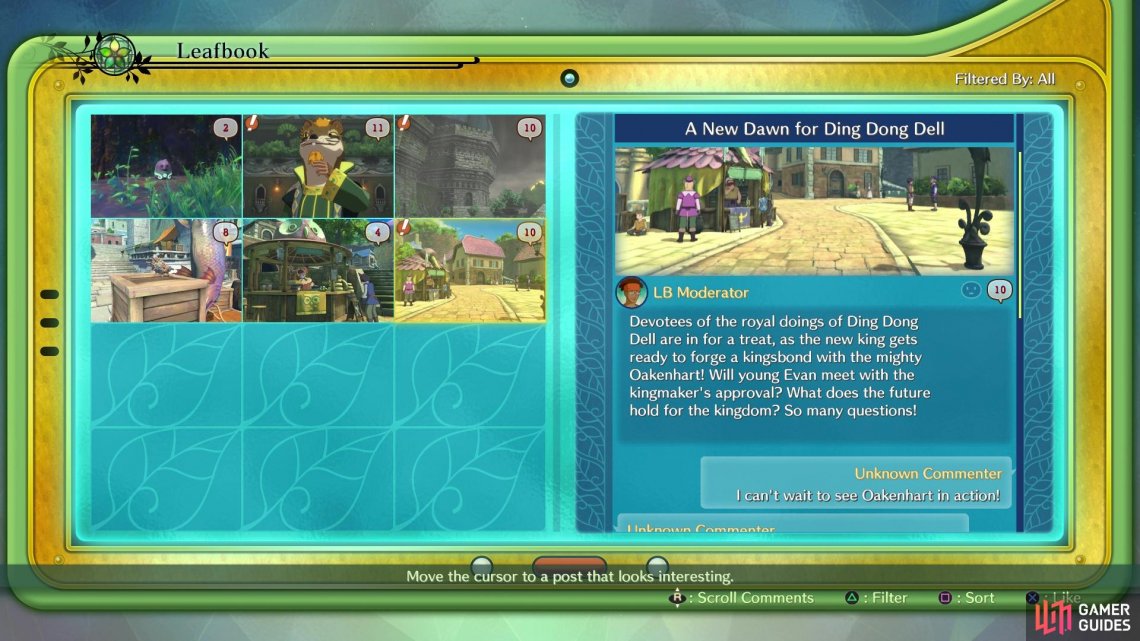 Leafbook is pretty much just social media, but it adds some additional depth to the game

Follow the path behind the merchant to encounter your first group of enemies here, who shouldn’t be any sort of problem for you, since most of them will be similar. Keep following this path until you come to a spinning plant on the ground, sparking a short scene with it. This thing is called a prop-leafed clover and they only grow in this dungeon, but you can’t do anything with it right now, so ignore it and carry on. Since you can’t reach the western path, continue north to come to a slightly more open area.

You will come across a larger enemy called a Porc Chopper here, who will charge up and swing its sword while spinning. This attack might prove difficult to dodge, so it might be a better option to just block it to avoid unnecessary damage. Luckily, it falls down after doing this maneuver, leaving it open to attack. Explore this area for a bunch of sparkles, then look along the southern edge of the map to find a chest (100 guilders). From here, continue northeast, opting to stick to the terrain and not the wooden planks, just because you will find another chest (Baby Buckler). 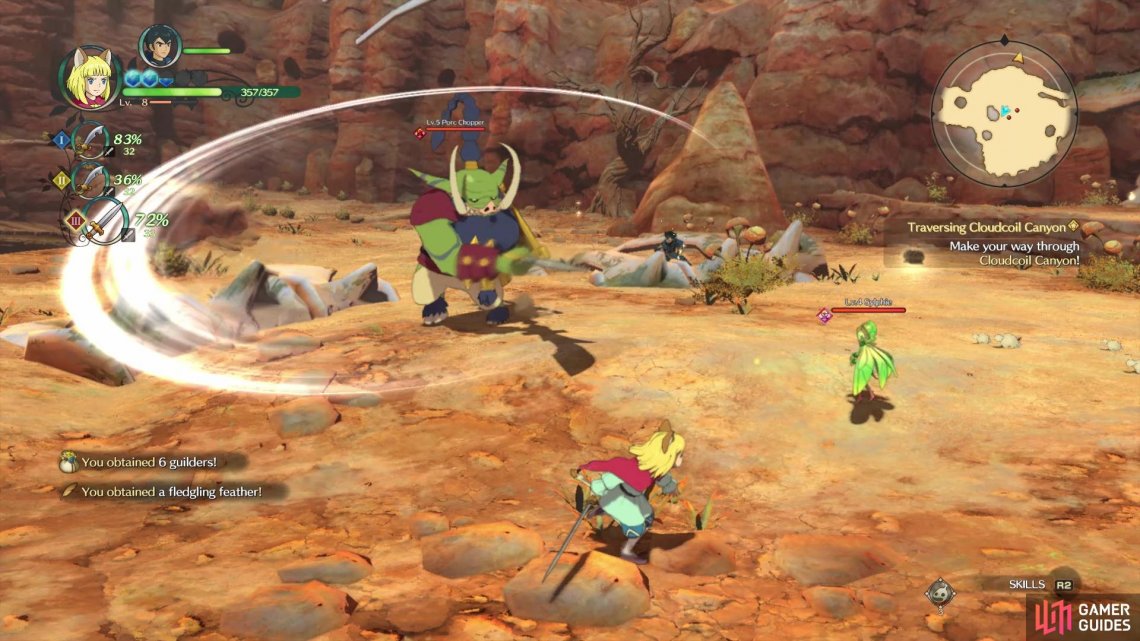 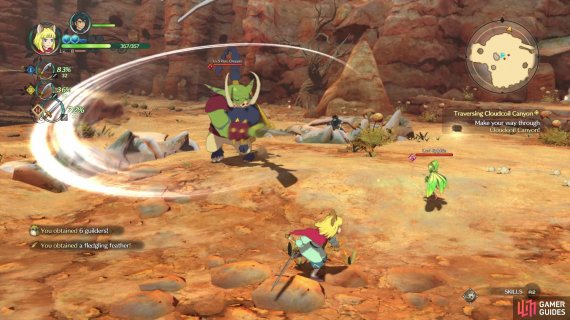 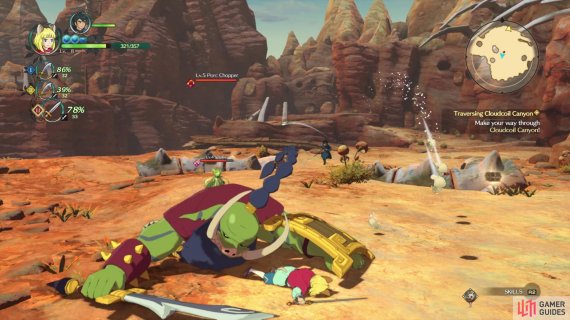 Be careful of the Porc Chopper’s spinning attack (left), although it will fall down after doing it (right)

Feel free to backtrack to pick up the sparkles on the wooden pathway, if you wish. There will be more enemies to fight, as well as another clover tucked away in the corner here, so just keep going to the north and then west when you can. In this next open area, clear it of enemies first, then go around and collect the sparkles. Note that there is one sitting on top of one of the huge rocks, and while you could attempt to jump up there normally, you should notice that there’s another clover sitting at the base of the rock. Follow the western edge here to find a chest with a Dangerous Blunderblaster in it. Not far north of there will be another Trip Door (Bellywriggle Bluff) and a waystone.

The objective marker is close, where your higgledy will run off, so follow him. At the end of this trail, you will unearth a new type of higgledy, as well as a new hero, Wiff-Waff. It will hand Evan a Moldy Old Twig and teach him a new non-battle spell, Wind-Whipper. This new spell can be used on the clovers you’ve been finding to create a gust of wind, blowing your characters upwards and onto the ledges above. Approach the clover and interact with it to cast the spell, then ride the wind to the ledge to find a chest (Gustproof Whirlwind Boots).

With this spell in your possession, you can backtrack and use it on the clovers to grab some treasures. The sparkle on top of the large rock mentioned not too long ago is nothing special, so you can ignore it if you want. However, the clover by the one group of enemies will allow you to reach a ledge. There will be a Porc Chopper up here, as well as two chests, one to the north (Queasy Cutlass) and another to the southwest (300 guilders). Note that the first clover you came across in this dungeon leads to an area with level 20+ enemies, so it’s best to forget about that place for now.

Travel back to where your higgledy ran off and look on the lower ledge for another clover, which will shoot you up and allow you to delve deeper. Some more enemies will be waiting, so clear those out and look on the northern tip of the map for an obscured chest (Soreaway). The path will split in the next area, but the one trail is too high up and you don’t have any clovers nearby, so it looks like you’re stuck going west. The next area is fairly large and looks like it might be hiding something, but there’s nothing too important, other than more sparkles. Continue west and you should see that the path splits, with one going lower.

Take this one first, since it will lead to a treasure chest at the very end, where you’ll acquire some Crabapple Tea. Return to the split and take the higher path this time, jumping over the gap. Press on, fighting more enemies, until you reach a wooden walkway, leading you to your first Higgledy Stone. As mentioned when you met Auntie Martha, one of the ways to get new higgledy heroes is through these stones. When you find them, it will ask for a specific item and upon handing it over, the hero will join you. In this instance, it asks for a Munchy Nut, which you should have plenty of at this point, so hand it over to have Filigree the Flighty join your adventure. 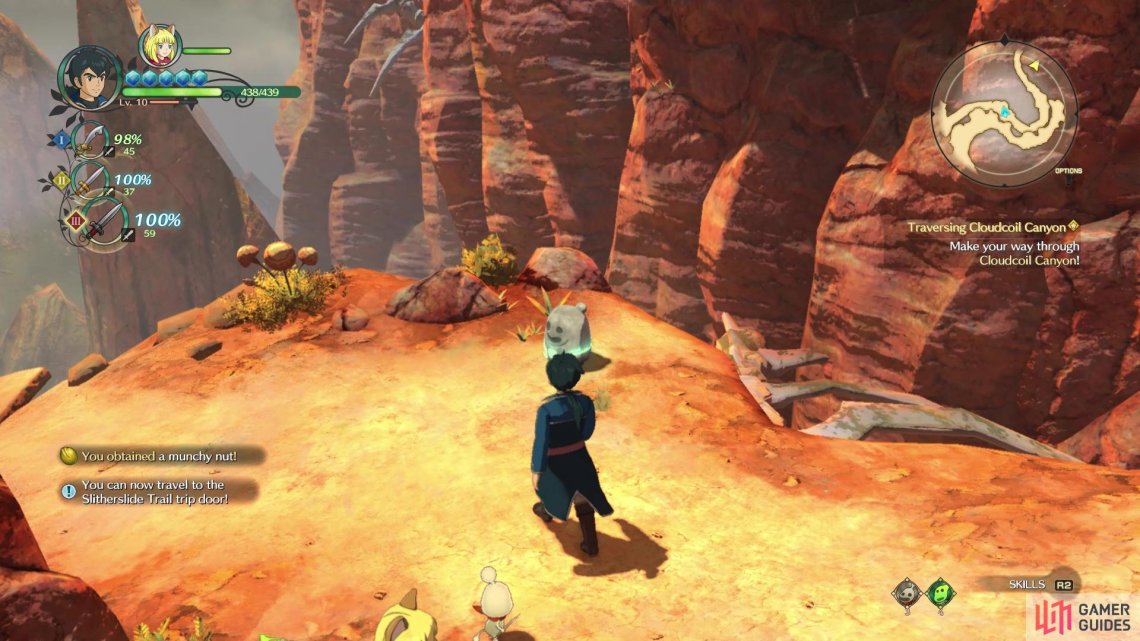 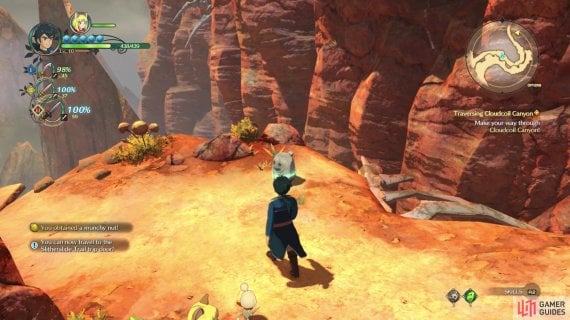 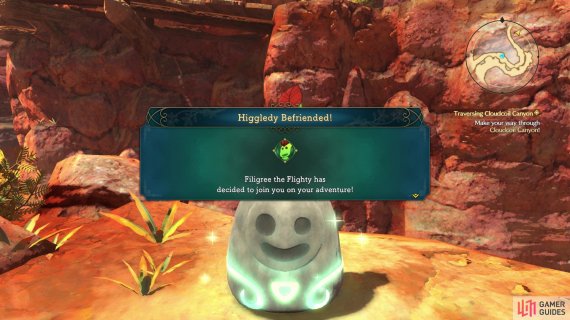 Higgledy Stones can be found in places and upon giving it the required item (left), you will have a new Higgledy Hero join you on your adventure (right)

Awarded for giving the right gift to a higgledy stone.

Right across from the Higgledy Stone is another Trip Door (Slitherslide Trail), so activate it and continue your ascent. Not far from there will be a clover, which you can use to reach the ledge above, where you’ll find a chest right as you land (Sixth Censer) and another at the far end (Three-Leafed Soreaway). Drop back down to where you flew up and continue climbing to the top, where a cutscene will happen.

Well, it looks like things have gone from worse to even worse. Slowly follow the pirate into the base and up the incline, where some more scenes occur. You’ll meet the boss here, but before he can sling you off the cliff, more bad news will be shared, as the wyverns have kidnapped his daughter, Tani.