Upon reaching Chapter 4 in the main story, you will begin to grow your kingdom of Evermore, with the game providing the basics of how to do things. Before you get into the thick of things, though, some basics in understanding how building a kingdom needs to be set. First of all, you have your own currency in kingdom mode, called Kingsguilders (KG, for short), which you will get through your kingdom itself, as well as from other means (like sidequests). Your main building, the castle, will allow you to oversee everything, and it will have coffers that you can upgrade to have it hold more KG.

At the beginning of your kingdom, your coffers will only be able to hold a maximum of 5,000 KG. This will accumulate on its own, so you will want to periodically check back to empty it. Influence is another stat that you will see a lot, which is basically a value that dictates how much KG you will accumulate. You will gain Influence by just doing about anything constructive in this mode, whether it’s creating buildings or completing research. That brings us to the main point of the kingdom mode, which is about getting those buildings up and running. 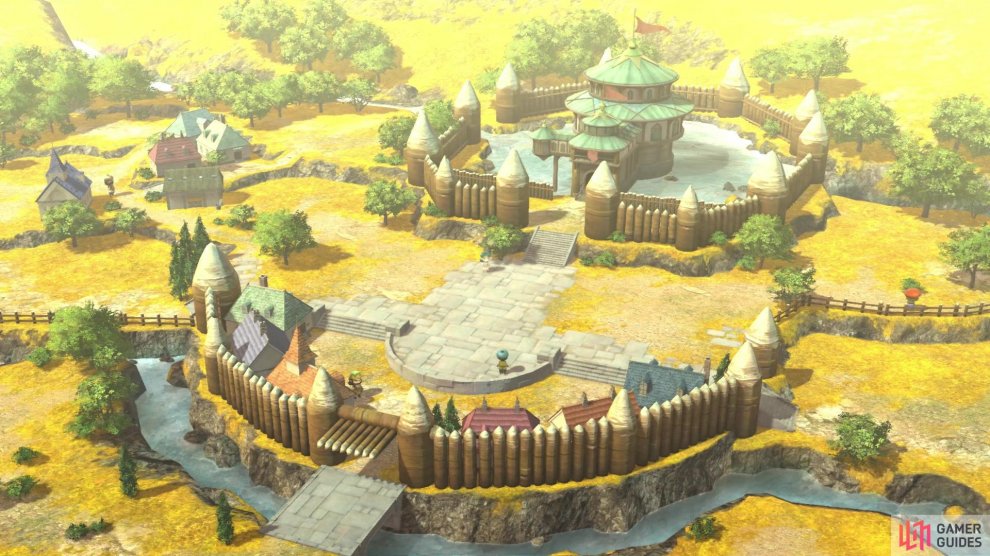 When you first get to the kingdom mode, you will be required to construct four buildings before moving on. Unfortunately, you won’t be able to build anywhere you please, as each building is assigned to a predetermined plot of land. To erect a building, you will need to spend a certain amount of KG and sometimes, you will need to have achieved a certain threshold for Influence. Later on, you may come across buildings that have other requirements, but the majority of the buildings will just require KG and Influence.

Once you’ve built some facilities, you will want to assign personnel to them, as a service is useless without having someone to actually do the working. From the start, you will only have a few citizens available, but you can get more in the world, usually by doing a sidequest. As one would expect, each citizen has their own strengths and weaknesses, which is shown as four stats on their status screen. This is their IQ and it will affect your Research by allowing you to do it, as well as make research go by quicker.

The majority of the facilities will have research to do, which can either affect your main game in some manner or help out in kingdom mode. Every bit of research has requirements, usually requiring a specific amount of IQ from the citizens assigned to that facility, but some will need a specific skill from a citizen (every citizen has a skill). Now, this is where the waiting will begin, as each piece of research has a timer on it that will show how long it will take to complete. For example, the first piece of research you have says it will take a minute, but by having more people with a higher IQ than needed, then the time was shortened to within ten or so seconds.

Once the research is complete, you will gain some Influence and more pieces of research will unlock. That’s the general flow of kingdom mode: build facilities, assign the proper personnel, and do research. You’re basically restricted by the level of your castle, which will have specific requirements needed in order to level up. Leveling up your castle/kingdom will grant you more plots of land, as well as more facilities to build. For example, to upgrade to level two, you need to have recruited 25 or more citizens, as well as build at least 10 facilities. There are only four levels for your kingdom and to reach the final one, you will need to have recruited all 100 citizens in the game. 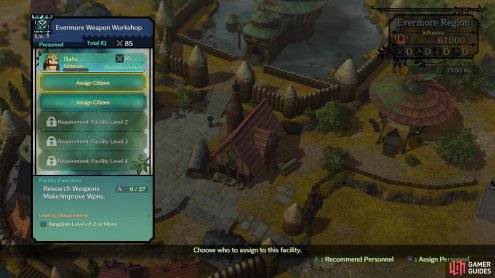 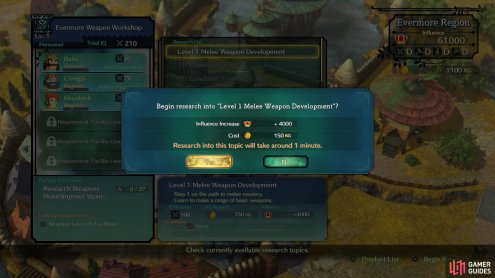 As already mentioned, citizens are the most important part of your kingdom, as they are necessary to conduct research and even gather materials from those facilities. While some will join you during the course of the main story, the only other way to recruit new citizens is by completing sidequests. You will find sidequests in the various towns, as well as more via Swift Solutions. You’ll know a sidequest rewards a new citizen by a stat sheet on the right side whenever the information pops on your screen, but also from the head icon next to the sidequest in your list.

It should be your top priority to do these sidequests as soon as they unlock, as having more citizens will help you unlock all sorts of goodies in your kingdom. Plus, once you reach certain thresholds, you will be able to upgrade your kingdom, allowing for more facilities. Every citizen has stats attached to them, which is their IQ for specific facilities. Also, each citizen has a skill that is used for research purposes and they will even earn experience while assigned to facilities. Once this experience caps out, they can be leveled to the next rank and this can also be important to pieces of research. There are three ranks here; Beginner, Veteran and Master (not all citizens start out at Beginner). It’s important that they are assigned to a facility, as they will not gain experience otherwise.