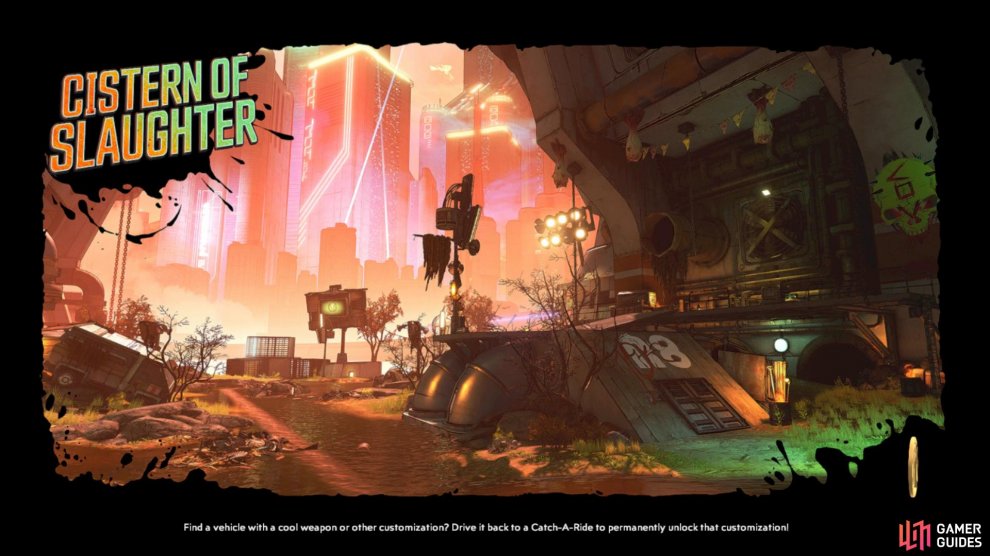 Warning! Due to the nature of the arena and the flying enemies you’ll encounter within, this Circle of Slaughter has a bug where an enemy can leave the arena, causing you to be unable to complete it.

Follow the guidelines in the following page to find where to unlock and begin the Cistern of Slaughter. This particular Circle of Slaughter focuses on the many creatures throughout the galaxy be it Skags or Grogs and knowing how to deal with them will give you an easier time.

As previously mentioned, Cistern of Slaughter focuses on all of the creatures you’ve met throughout your travels in the galaxy. You should have no issue with all of the particular forms of Skags and Grogs but Rakks will cause a lot of trouble as will the various forms of Saurians and Jabbers. Regular Jabbers are not too difficult but once you start encountering the Elemental types, focus on burning down the Charged and Flaming Jabbers first, these are the most bothersome. For that reason, bring along a good selection of elemental based weapons to help hit the correct weak spots.

As you reach the later stages of the trial, you’ll encounter Bloated Rakks, airborne creatures that will release Irradiated Snakes all over the arena, these can all add up and cause you to become overwhelmed fairly quickly so focus all your attention on any Bloated Rakks that you see (coincidentally these are the same enemies that can cause the bug mentioned in the warning at the top of the page). Finally, the most deadly opponent in this Circle of Slaughter is the Tremendous Rex, a gargantuan Saurian that will use mounted weapons to devastate you. Take out the other creatures in the current wave to leave you more room to deal with this beast and remember to focus your fire on the sides of the body to avoid dealing less damage.