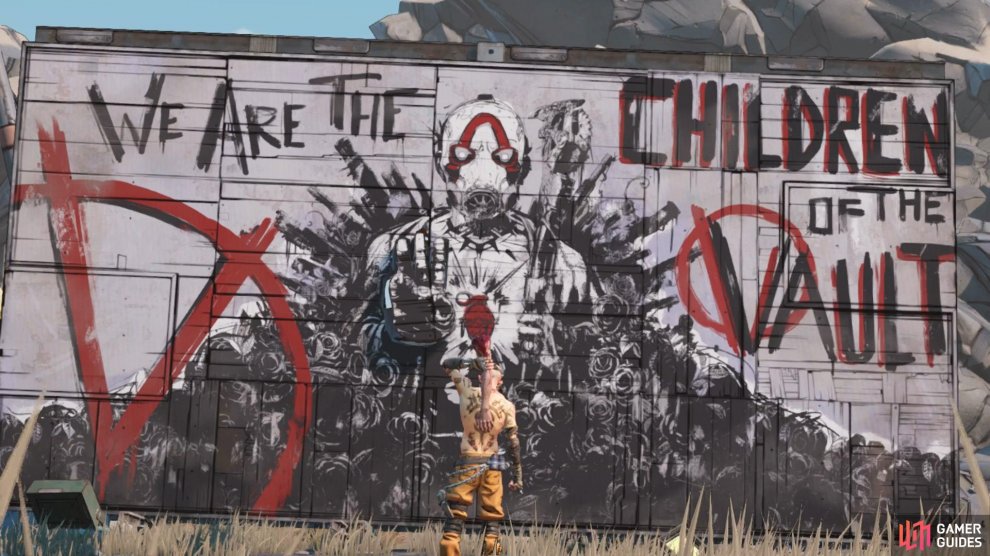 You'll be given a choice of two difficulties when you begin the campaign for the first time, those being Normal and Easier. This guide is written on the basis of the Normal difficulty and really, it should be the choice most players take in Borderlands 3. Next you'll be given the choice between a Group Mode for when you decide to jump online with a friend and blast some Psychos. Choosing Cooperation is the most sensible here, everyone will get their own loot and the game will scale your teammates level to meet your own (or vice versa). The alternative is to go with the classic Borderlands rules, every Vault Hunter for himself and no level scaling.

Finally, during the intro, you'll be given the choice to select your character and while you'll find more details about them in their respective chapters, here's a few notes about them below: 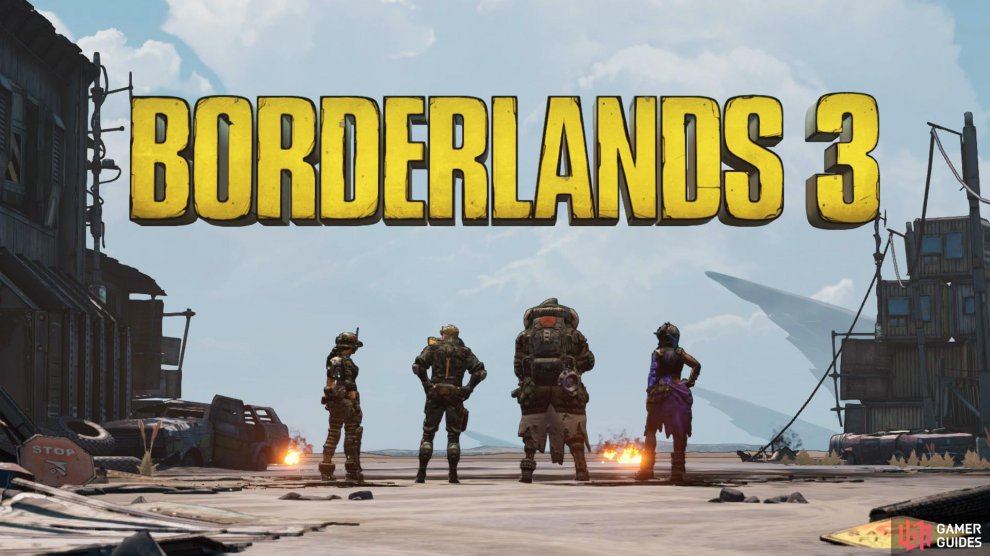 Note: As a disclaimer, this guide was written with Moze selected but will cover strategies and tips for all Vault Hunters.

Fresh off the bus, you'll find yourself at the Covenant Pass bus stop with a Claptrap that greets you. This friendly Claptrap gives you the lowdown on the Children of the Vault, a new gang that has risen in Pandora. Claptrap will also hand over the useful Echo 3 which acts as your menu.

Note: Although some parts of the menu is locked for now, take the time to get used to it. You'll notice in the map screen that each zone has challenges and completion goals to aim for.

There's not much to see in Covenant's Pass save for the actual mission at hand but you can choose to ignore Claptrap for now and search around the immediate area for some loot. Anything that has a green light on it indicates that it can be interacted with and as such, should be opened whenever you come across it. Take the time to loot all the lockers and fridges to give yourself a bit of starting cash and then head over to Claptrap to proceed with the mission. 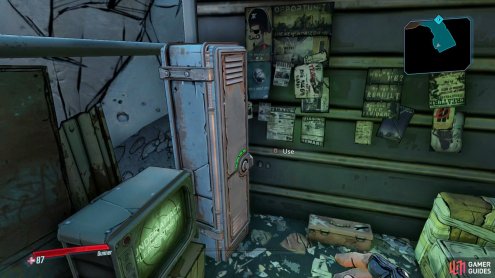 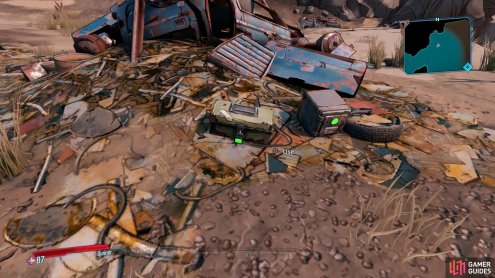 Claptrap will direct you to make use of the nearby Quick Change station to register your Echo. These are where you can come to alter your appearance with the many cosmetic items you'll find throughout your adventure along with changing your name or respeccing your skills, it's a convenient machine that will be seeing a lot of use.

Tip When playing multiple characters, any skins or other cosmetics will be shared across all characters as will your bank when you gain access to it.

Following this, Claptrap will head forward where he comes to a standstill at the nearby car pile. Head over to the lever to the right to give him a helping hand and then crouch under the raised car to continue following him. As you press on, you'll find a gap you'll need to jump over, do so and should you miss the jump, climb back up the ledges and try again. Humour Claptrap some more and follow him as he unearths his stash Pandora style.

Open Chest, Get gun from cache

Interact with the nearby chest to claim your first gun, a simple Moloko Pistol which comes loaded with two fire modes. New to Borderlands are alternate fire modes which can be switched on some guns by pressing [DOWN D-PAD]. This affects how your weapons behave and some will have game changing abilities such as switching between elements or ricocheting your bullets around the area. For now, this current Pistol comes with the ability to shoot Zip-Rockets, handy for a bit of explosive fun.

Follow Claptrap once more to the gate of the Propaganda Center as you witness his attempts to get the door open. He succeeds but not without consequences that you'll be left to deal with.

It's time to take the fight to the Children of the Vault (COV) as Fanatics and Psychos come out guns blazing. Fanatics are you typical run of the mill enemy that will hang back and shoot from range, make use of nearby cover to take care of them easily. Meanwhile, Psychos are a little different and will rush you to inflict the pain with melee attacks, make these your main priority whenever you're in a firefight.

Take note of the hazards around the area too, you'll notice a radiator you can shoot to electrify your foes for example. You shouldn't have too much trouble with this initial group of enemies but should you find yourself low on ammo or health, be sure to open all of the lootables around the area to replenish your stocks. 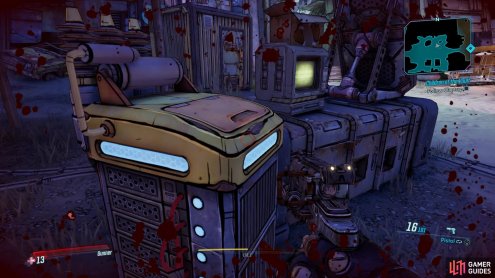 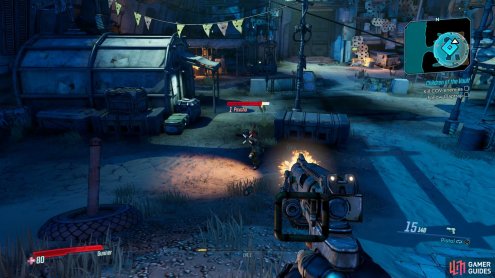 Down yourself by grenade or explosion.

Stay Away From The Light

Once you're content with killing yourself, head through the now opened door and into a larger area where more enemies will attack. You'll need to make much better use of the available cover here as the area is a lot more open, causing you to be attacked from all sides. Make use of the Fire Barrels around the courtyard and remember to loot all of the lootables to replenish your ammo and health, there's plenty around.

Search area for a shield

Once the area is free of COV again, take the time to finish plucking the area clean of all lootables before you set off to look for the Shield. While doing this, Claptrap will reveal the location of the chest for you saving you the hassle. Once you're ready, head over to the northwest of the area and climb on top of the containers where you spot some yellow paint. You'll spot these all over in Borderlands 3 and they usually indicate a path you can take so be on the lookout for them at all times.

At the top of this stack of containers, you'll find yourself a Red Chest, ususally these Red Chests are well hidden throughout each zone and contribute to the Zone Completion. You can expect to find valuable items in these so they're well worth hunting down but for the purposes of this mission, you'll find your much needed Shield. All four are identical so pick one up and equip it immediately, remembering to take the rest with you to pawn off later. 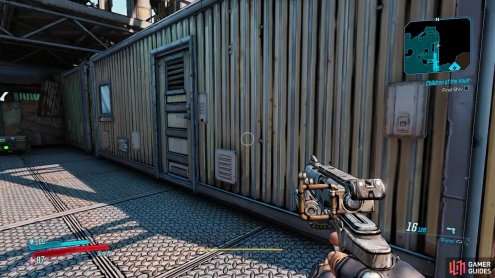 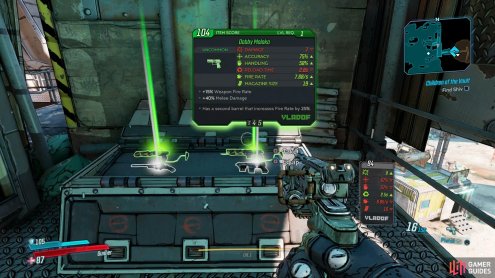 Before you head off to face Shiv, climb the stairs and when you reach a dead end with a lootable chest, turn to your right and climb on top of the container, at the end a large White Chest awaits you. While these chests aren't as lucrative as Red Chests, they'll still include weapons for the most part and seeing as you only have a basic weapon, you may well find one here that will be useful for the upcoming battle.

Be sure to equip any of your weapons you may find, for now you have two weapon slots and it's a good idea to have two different weapons that use separate ammo so that you have a backup should your primary weapon be out of ammo. Once you're ready, head through the now open doors to face off against your first mini boss. 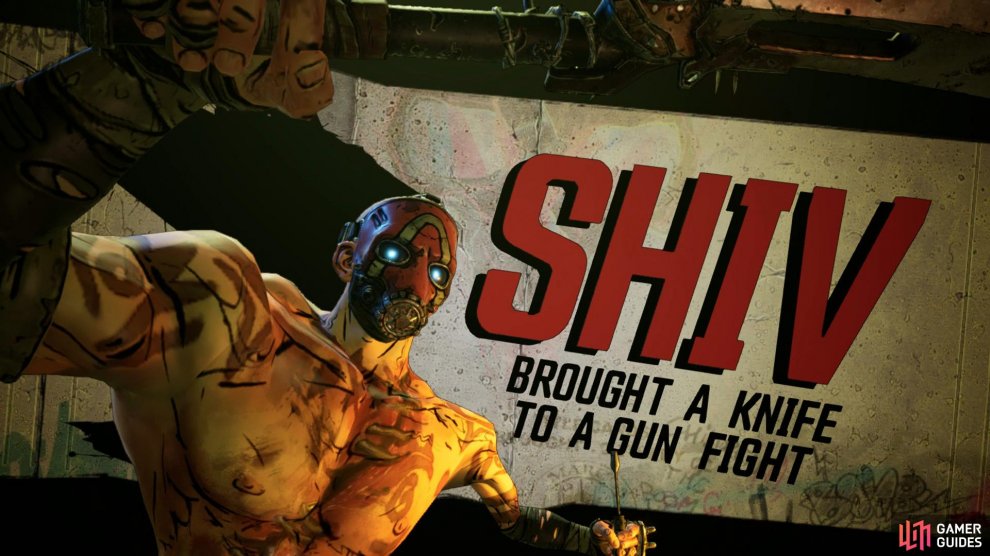 The first thing to pay attention with Shiv is that he actually did bring a knife to a gun fight, meaning that your largest threat here is letting Shiv close the distance on you. His attacks only consist of meleeing you, which will inflict reasonable damage on you, and a Ground Slam which will affect the area around him, this is easily avoided by simply jumping to the side of the attack when you see him go to perform it. Shiv is however fairly fast so be sure to stay on the move at all times.

The arena is of special note however, you'll notice all around you that there are many opportunites to shock Shiv by shooting the two Radiators located here. Alternatively, you'll discover a couple of Fire Barrels situated around, if you can lure Shiv close to one and explode it on him, that will do most of the work in putting him down. Thankfully, there's no Legendary drop to farm here so don't be alarmed if none of his drops are worthwhile. Pick up whatever is waiting for you on the ground and then pay attention to the more worthwhile news here. 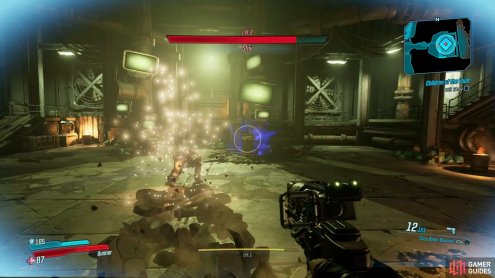 With Level 2 comes your first skill point and while it will be a long time before you go crazy over finding builds and other such tasks, for now just go with any Action Skill that piques your interest. There are three trees for you to choose from and once purchased, you can swap the Action Skill at will. You'll also notice further down on the trees, Augments, which are situated to the left and right of any particular tree. These are new to Borderlands 3 and will affect your Action Skill in many interesting ways. Don't be afraid to experiment as you can Respec your skill points at will from any Quick Change machine. For more information on the what builds to aim for down the line, check out the [Builds] section in the Appendix.

With Shiv out of action, loot all of the nearby lootables and then head up to the second floor to make use of the Magnet Controls and send poor Claptrap crashing to the ground. Jump back down to the bottom and revive Claptrap by holding down the [SQUARE]/[X] buttons while targeting him. In return, Claptrap will signal to Lilith, the Siren who has been communicating with you, who will make her entrance in a blaze of glory.

Did you know? For fans of the Borderlands series, you may already be aware of this but for newcomers, Lilith was the playable Siren in the first Borderlands game.

Head on over and speak to Lilith to learn a little more about your current situation to bring the opening mission to a close.

Welcome to the Crimson Raiders

Complete mission "Children of the Vault".