What is Guardian Rank? 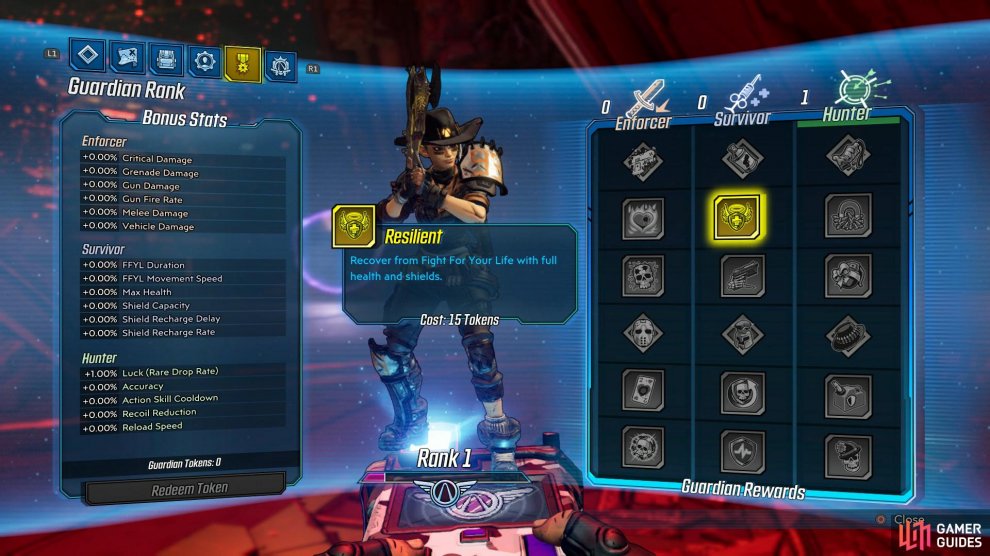 Upon beating the Borderlands 3 main campaign, you’ll unlock the final menu in your ECHO, the Guardian Rank, which can be used to advance your characters further.

What does Guardian Rank do?

You’ll notice there’s a new purple bar above the exp bar and every time you do anything that would gain Exp, you’ll also gain Guardian Exp, be it killing enemies, completing a mission or any other such activity. You’ll also be able to further boost the Exp gain by enabling Mayhem Mode, increasing the Exp as high as you’re able to. Once you Rank Up in Guardian Rank, you’ll obtain a Token that can be spent in one of three trees, Enforcer, Survivor and Hunter.

Within each of these trees are passives you can increase such as Gun Damage, Shield Capacity or Luck (Rare Drop Rate) however do note that the more points you put into a particular passive, the more diminishing returns you’ll see. The stats will max out around 15% and it’ll take hundreds of points just to reach that number in one stat. You can however keep earning Guardian Rank Tokens, there’s no limit so if you were to play enough, you could theoretically max every one. The next beneift of Guardian Rank is that it’s account bound, this means that once you unlock it, the effects will apply to every single one of your characters, regardless of where they are in the story or their current level.

The final thing to note about Guardian Rank is the trees on the right side of the screen. For spending Tokens in each of the categories, you’ll unlock incredibly useful Perks to further boost your character or skins for cosmetic purposes. Due to the diminishing returns you’ll see on points spent, it’s better then to invest on unlocking all the skills in the trees (75 Tokens per tree) first to unlock all of the Perks.

The Enforcer Tree is all about increasing the damage you do and is one of the better trees to focus on. Stats such as Critical Damage, Gun Damage and Gun Fire Rate are all excellent choices to invest your points in however you’ll want to leave Vehicle Damage as one of the last Guardian Rank stats you invest in, there’s not enough situations in the game where you’ll be utilizing Vehicles.

As for Perks, Inner Fury really helps in the harder difficulties to take an enemy down and gain a Second Chance while C-C-Combo and Hollow Point will also increase your DPS massively and are some of the better Perks to focus on.

There’s some very useful Stats to aim for in the Survivor Tree, none less so than Max Health and Shield Capacity, two stats you’ll reap the benefits of straight away. FFYL Duration is another really useful one to aim for, having more time to recover from being downed is always useful, especially on the harder difficulties. Finally, both the Shield Recharge Delay and Rate are also useful Stats to aim for, FFYL Movement Speed can however be left for last due to it be the least useful.

Looking at the Perks, you’ll most likely want to make a beeline to Resilient (15 Tokens) as your first real investment in Guardian Ranks. Recovering from FFYL with full health and shields is an incredible Perk and one that will make your life a lot easier on the harder difficulties, especially in the Circle of Slaughters and Eridian Proving Grounds. The bottom two Perks are incredibly useful however due to the fact that you can’t disable Perks at this current time, you can limit the builds you may want to use with certain characters (such as making use of Roid Shields or builds that involve you staying at low health).

The Hunter Tree has one less Passive to increase in the others and there’s two clear winners in which to invest your points in. Early on, Luck is one of the best Stats you can invest in as increasing the rate at which Legendaries drop by up to 15% when maxed is very useful. Add on top the fact that this will stack with any Artifacts that have this stat or the Mayhem Mode modifiers and you’ll see a huge increase in Legendary drops. The second useful Stat here is Action Skill Cooldown and it’s self explanatory, being able to use your Action Skill more often is always a fantastic use. The other stats in this Tree are less useful save for possibly Reload Speed, Recoil Reduction and Accuracy shouldn’t matter too much at this point in the game.

Looking at the Perks, the Hunter Tree is by far the least useful of the bunch, with the only real useful Perk being the final two. Bullet Collector can be useful but certain Builds, such as Moze’s Bottomless Mags builds, will have no use for it. Topped Off however (50 Tokens) is incredibly useful as once again, anything that reduces the Cooldown on your Action Skill is always useful. The final Perk, Treasure Hunter is a bit misleading as in practice the effect is really useful however by the time you reach this Perk (most likely from spending points in the Luck Stat already) you will have had most of the Legendaries you’re looking for from Mayhem Mode III along with the Luck Stat increase.