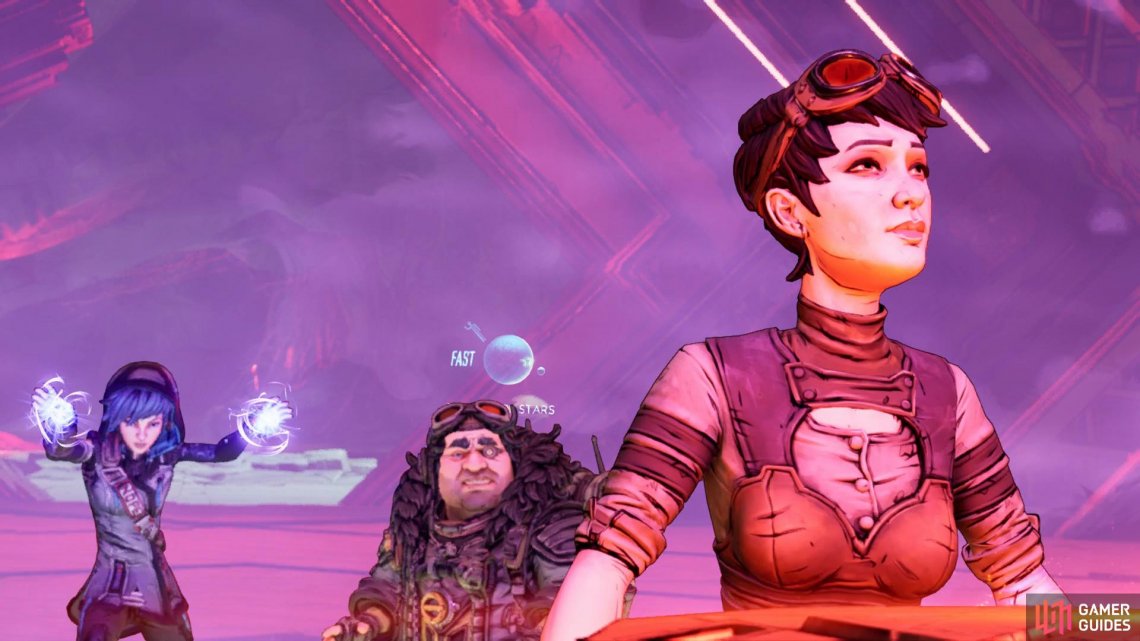 Make your way back to Sanctuary and make a short stop at Tannis’ lab to and hand over the key so the Siren’s can charge it for you. Pick it up once finished and return to Desolation’s Edge to meet up with Typhon Deleon at the large gate where you inserted the other Vault Keys. Place the key and then head through the newly opened gate to reach The Pyre of Stars.

The Pyre of Stars is the last Zone in Borderlands 3 which comes with Crew Challenges and Zone Completion tasks, take a look at the page for more information if you wish but most can be found on the main path. For now, follow Tannis and hand over the Pandora Vault Key when she requests it. After learning what you must do here, follow Typhon into the next large area and dispatch the large group of Guardians up ahead with his assistance. Once the area is clear, head north and to the pedestal and place the Promethean Key.

Continue to follow Typhon to the west and you’ll need to dispatch another group of Guardians in the next open area. Continue to follow Typhon through two more caverns, dispatching the Guardians as you go along. Once you pass through the large doors, you’ll find some glyphs in a chamber. Press the nearby switch to erect some platforms and begin climbing them until you reach the last one and look to your right. You’ll spot some more platforms you can jump to, do so and you’ll reach a hidden alcove on the eastern part of the map containing the first Red Chest. 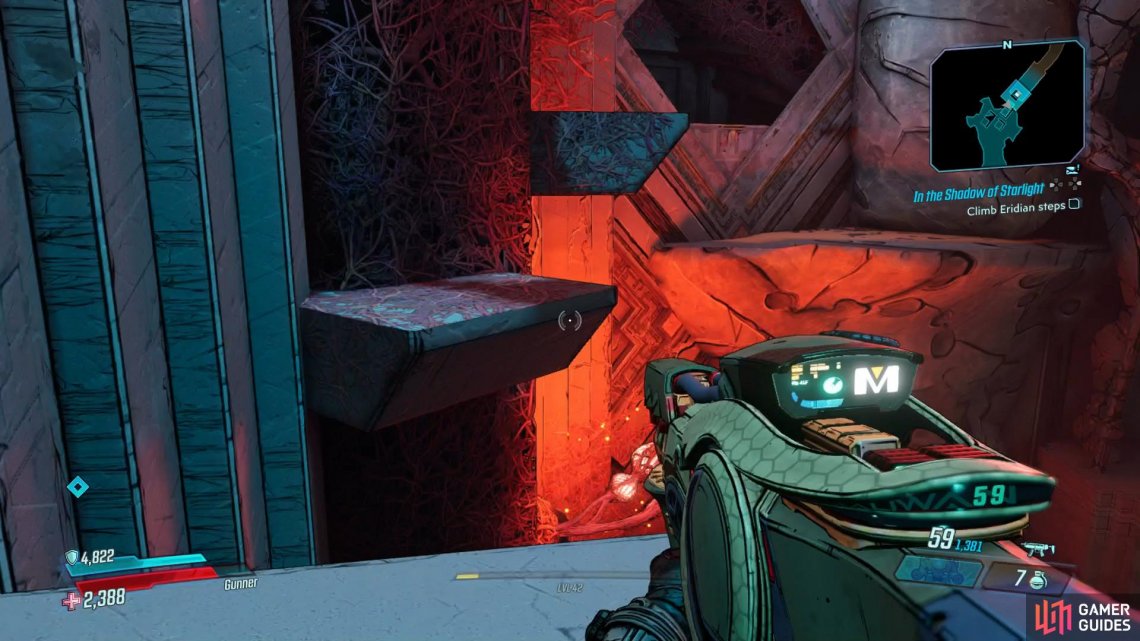 (1 of 2) As you reach the last step, look to the right to find a path to a Red Chest 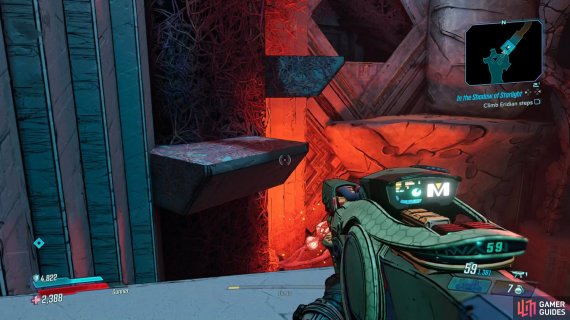 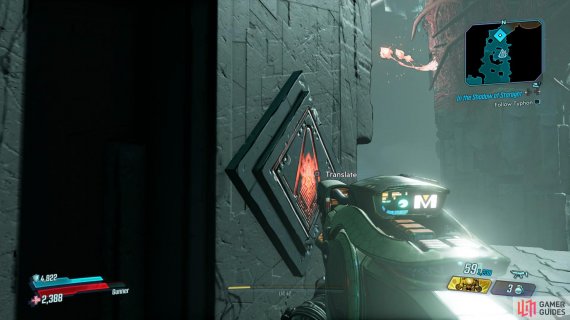 As you reach the last step, look to the right to find a path to a Red Chest (left), while you’ll find the Eridian Writing in the northeast of the next area. (right)

Exit the alcove and return to Typhon at the top of the platforms to continue. As you head into the Hallowed Shame, Tyreen will summon COV to attack you, focus on taking down the Badass Goliath and Longshot Fanatics and dispatch the rest of them. Continue to press on, defeating more Hags, Goliaths and other assortments of COV until the entire area is clear. Head over to a pillar on the east side of this area to locate the Eridian Writing.

Follow Typhon north after the battle and head into the geyser to shoot yourself up to the next area, the Eden-6 Pedestal. Use the Vault Key from Eden-6 here and then use another Eridian geyser to shoot yourself over to the next platform. Once again, Tyreen will set her COVs on you, dispatch them and then take out the group of Guardians that follow. With the area clear, head to the southeast to find the final Dead Claptrap in the game.

Climb back up and follow Typhon to the northeast and continue following the path until you take another geyser over to the next group of COV followed by another group of Guardians. Head over to the switches and use it to open the next door up ahead, then follow Typhon some more. As you head into the next large open area, you’ll have to deal with yet another group of COV and Eridian Guardians, by now you should know how to deal with these. This will however, be the largest group you’ll have to face so make full use of all the cover available here and focus on targets such as Longshot Fanatics first. 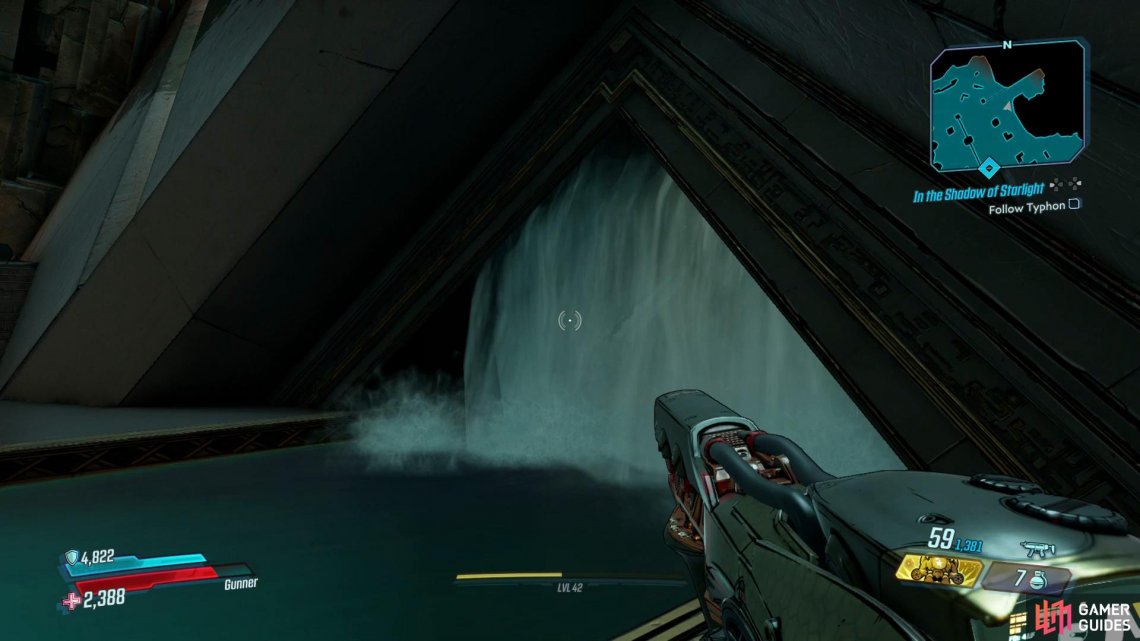 Search behind the waterfall in Wet Well to find the second Red Chest.

Once the battle is over, return to the waterfilled cavern here and search in the northeast corner for a waterfall. Head through the waterfall however and you’ll find the second Red Chest. Return to the southeast after and continue following Typhon to reach the Nekrotafeyo Pedestal. Head on over and insert the final Vault Key to have the machine start up.

Take the newly opened southwest door, follow it to the next fork and then head south to find the final Legendary Hunt in the game, Brood Mother. This particular beast will hop around hurling Corrosive bile at you, it shouldn’t pose too much of a threat and upon defeating it, you’ll unlock the Trophy/Achievement Got Big Game should you have killed all the others in the game along with a mail from Hammerlock containing the Legendary Assault Right, Bekah.

Defeat all of Hammerlock's Legendary Hunts.

Return to the fork and take the western path to find a drop back down to Tannis. As you do, another group of COV will attack you so defeat them and continue south to reach Tannis, Lilith and Ava at the Control Console. After a short scene, you’ll come under attack from waves of COV as you need to defend Tannis. The biggest threat here is the Anointed Hag, it has a lot of health and will deal heavy damage in return so focus your attention on taking it down before focusing on the rest. During the final wave, you’ll need to deal with an Anointed Goliath, this is no different to the battle against The Anointed boss you fought back on Eden-6 so apply the same tactics here to complete the mission and begin the final one. 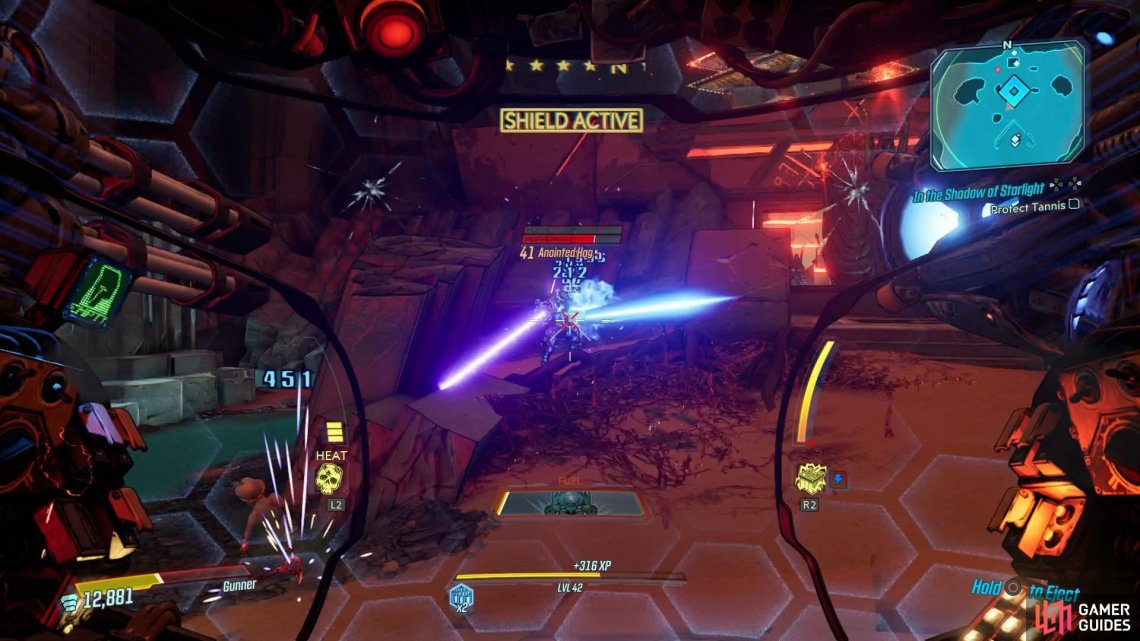 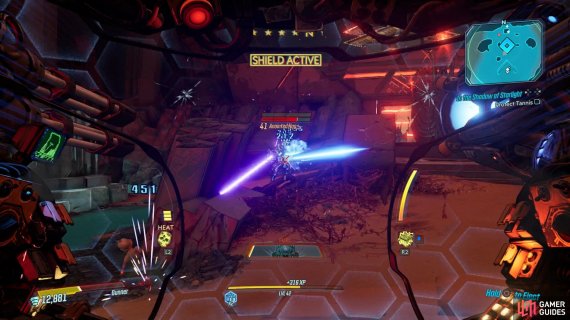 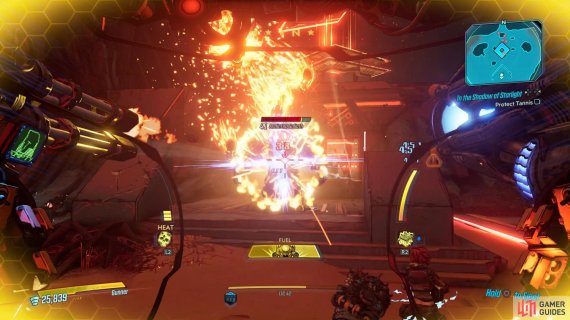 The Anointed Hag uses deadly lasers you’ll want to leap over (left), while the Anointed Goliath shoots out flames that track your position. (right)

Completing the mission will also unlock the trophy/achievement I Am A Goddess, A Glorious Female Warrior.

I Am A Goddess, A Glorious Female Warrior

Complete mission "In the Shadow of Starlight".