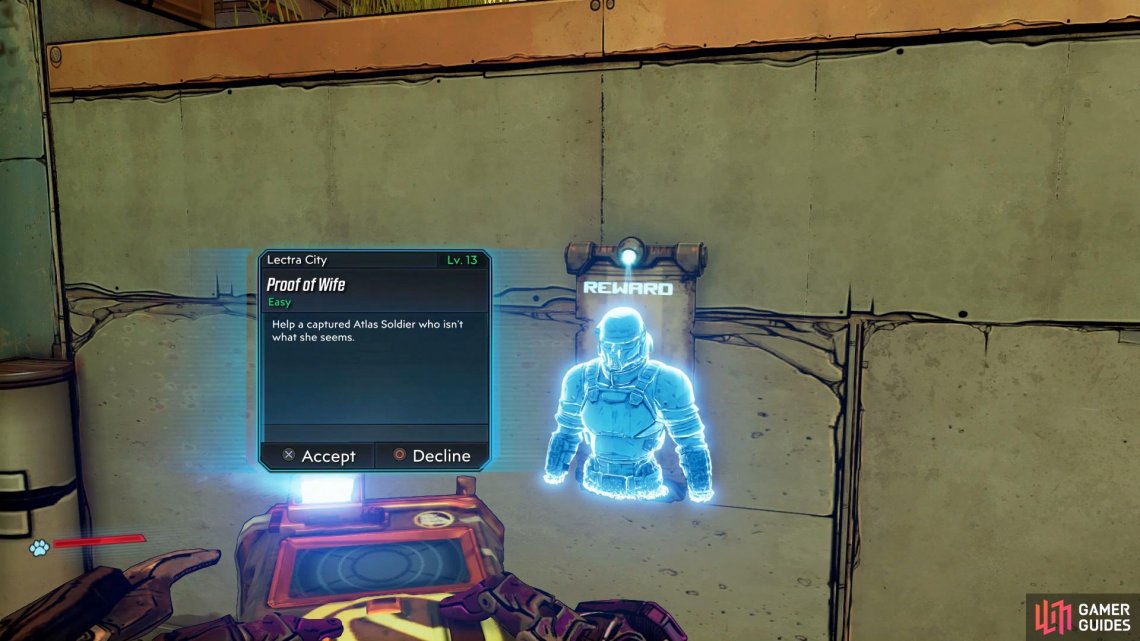 Once you’ve gained access into Lectra City from doing the Kill Killavolt Side Mission, you’ll be able to accept this Side Mission from any of the Bounty Boards within the City. 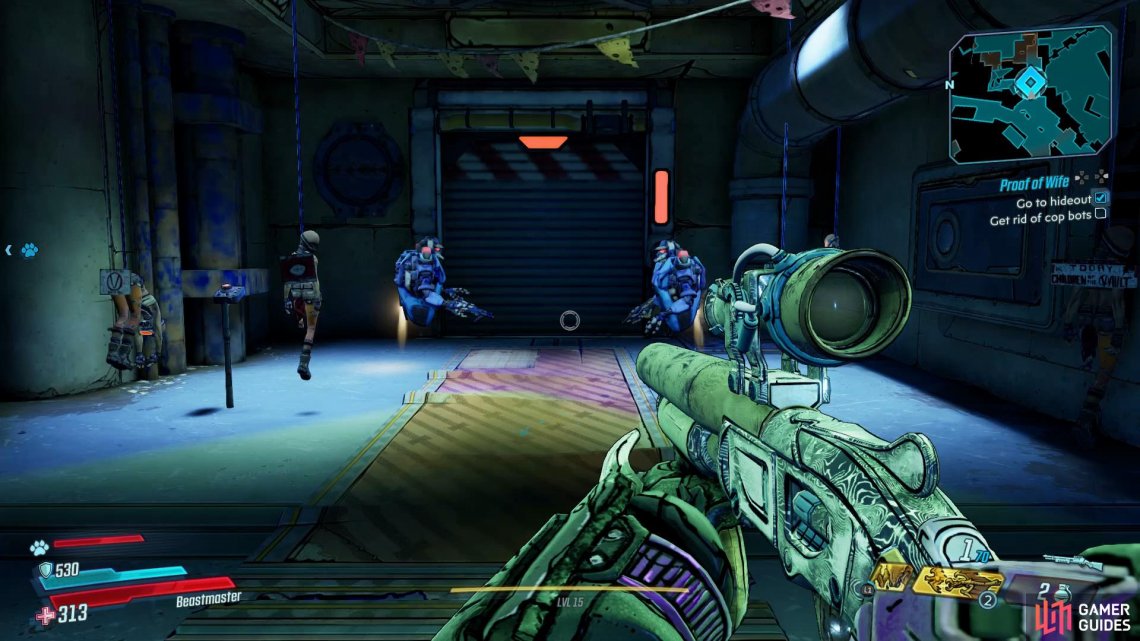 (1 of 2) Take out the two enemies the are guarding the hideout, 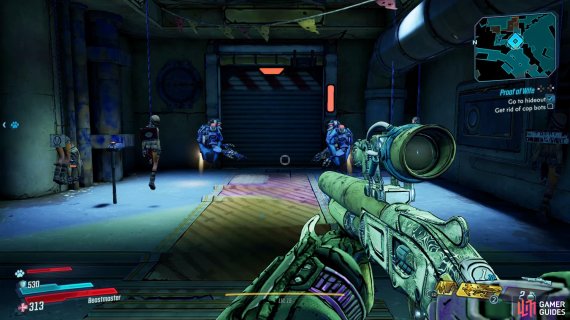 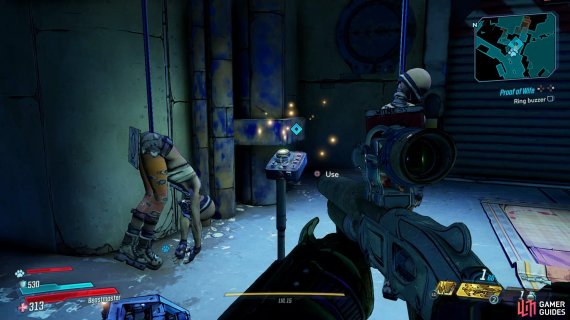 Take out the two enemies the are guarding the hideout, (left), and then press the button to trigger the next step. (right)

After you’ve accepted the quest, simply head down to the underground and follow the path until you reach the hideout. Take out the two enemies that are guarding the entrance and then interact with the button to trigger the next step. 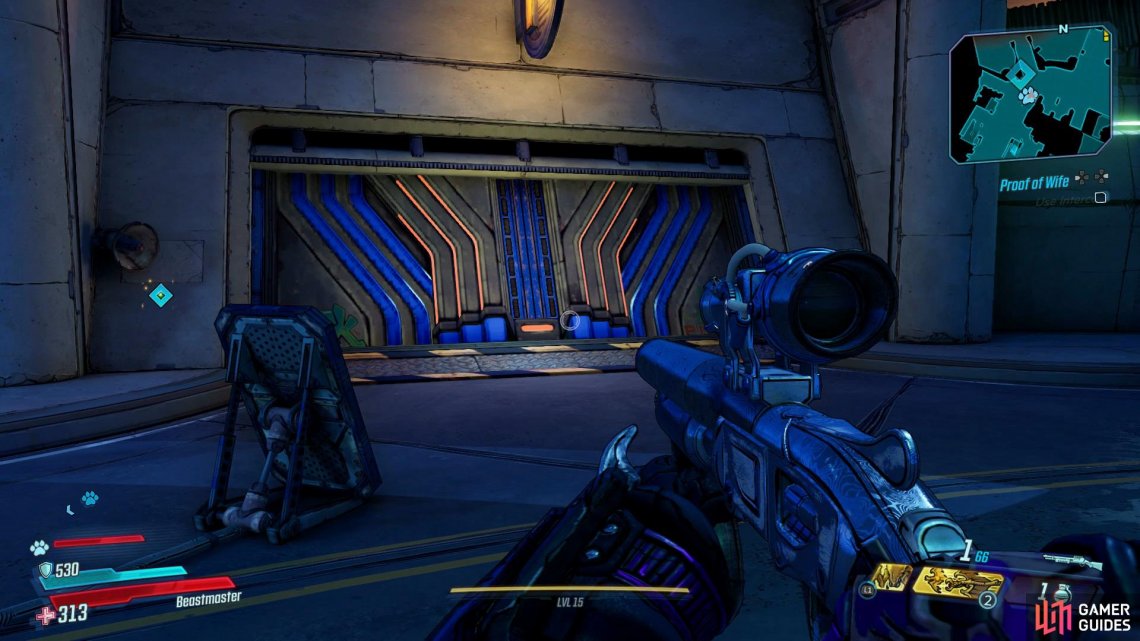 Press the button to the left of the Police HQ door to open it.

Now it’s time to make your way back up and head to the Police HQ. Once you’ve arrived, interact with the button to the left of the door to gain access into the HQ.

Inside you’ll need to take out Police Bots that are surrounding the HQ before being able to free Bloodshine.

The easiest way to take out the Police Bots is by focusing on all your shots at their head for a critical hit or by utilizing Corrosive weapons. 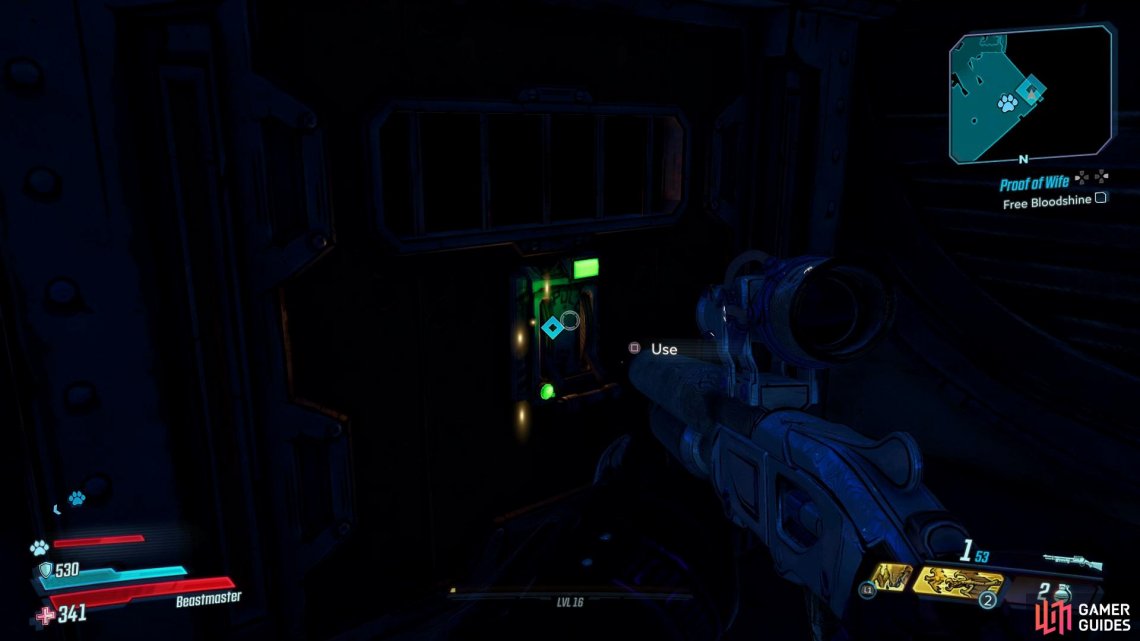 (1 of 3) pull the switch on the right side of Bloodshine’s cage to open it,

Once you’ve cleared the area of Police Bots, head over to Bloodshine’s cage that’s in the corner of the room and pull the switch that’s on the right side of the cage to release her.

As Bloodshine exits the cage she’ll try to attack you, simply take her out and collect Bloodshine’s Mask before heading back to the Hideout. 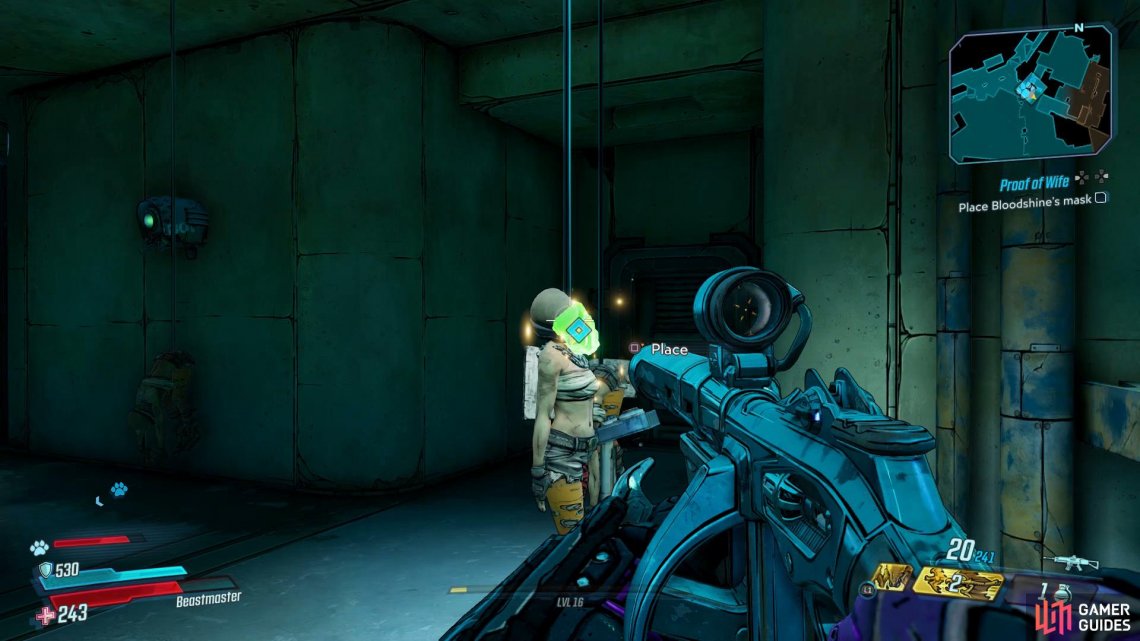 (1 of 2) Place Bloodshine’s Mask on the hanging body that is outside the Hideout, 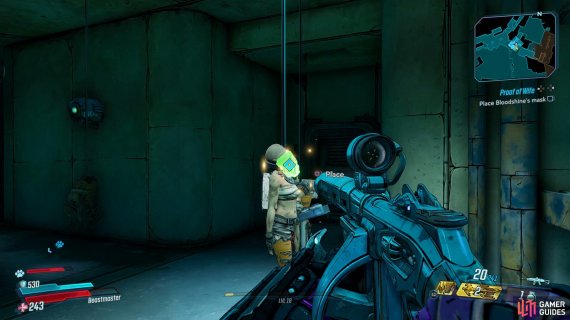 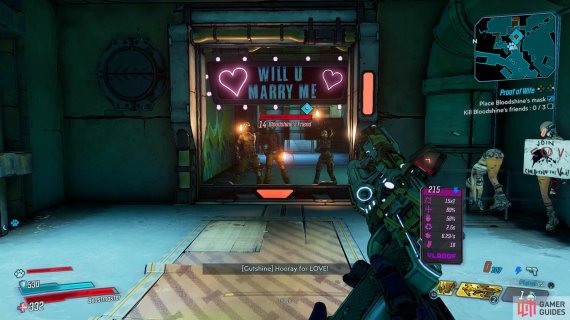 Place Bloodshine’s Mask on the hanging body that is outside the Hideout, (left), kill Bloodshine’s Friends to gain access to the wedding venue. (right)

With Bloodshine’s Mask collected, head back to the Hideout and place the mask onto the hanging body that’s outside of the hideout. Once the door has opened, take out Bloodshine’s three friends and head into the wedding venue. 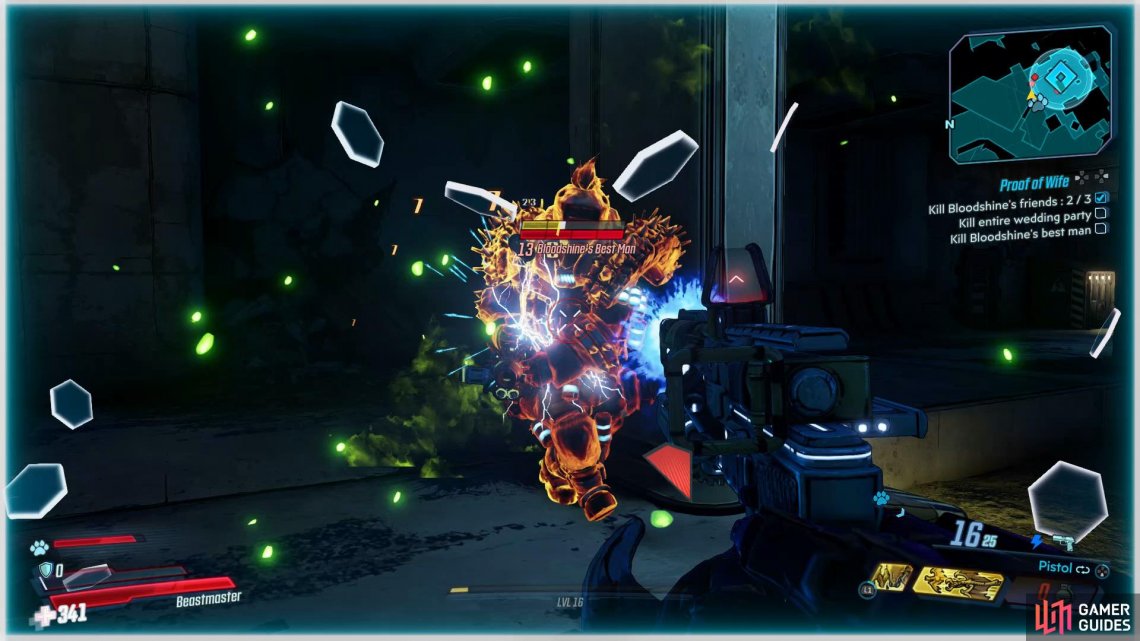 (1 of 3) Kill the first set of enemies in the arena until Bloodshine’s Best Man will spawn,

After you’ve defeated the Best Man, you’ll need to kill a few more enemies to get Bloodshine’s Mother to spawn, same tactic as the Best Man, just keep in cover and make sure the area is clear and you’ll be fine. 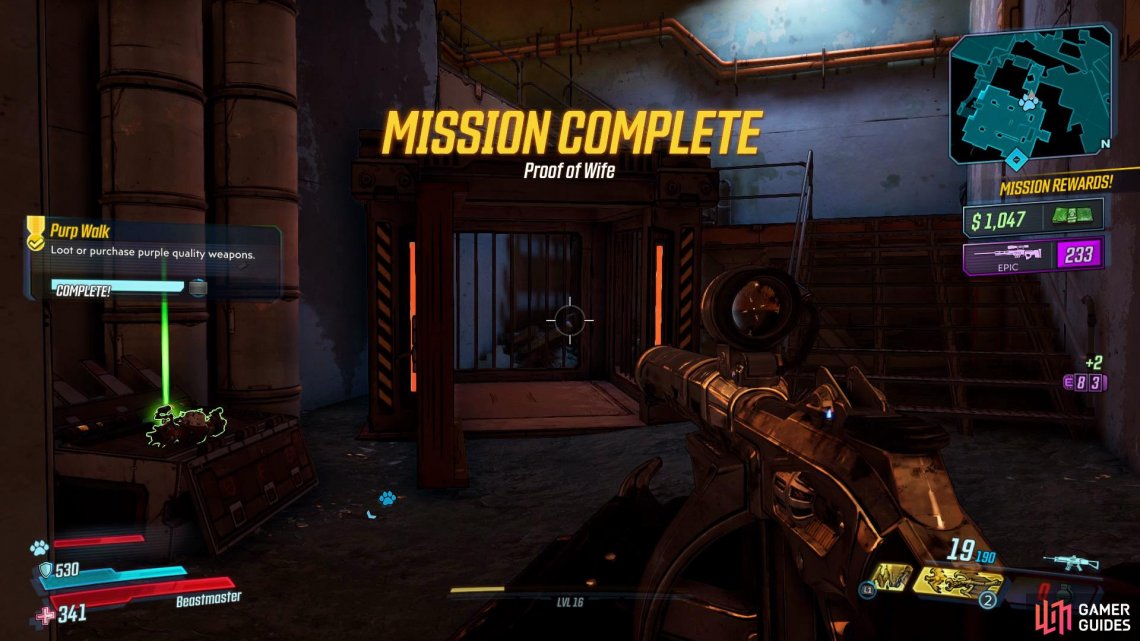