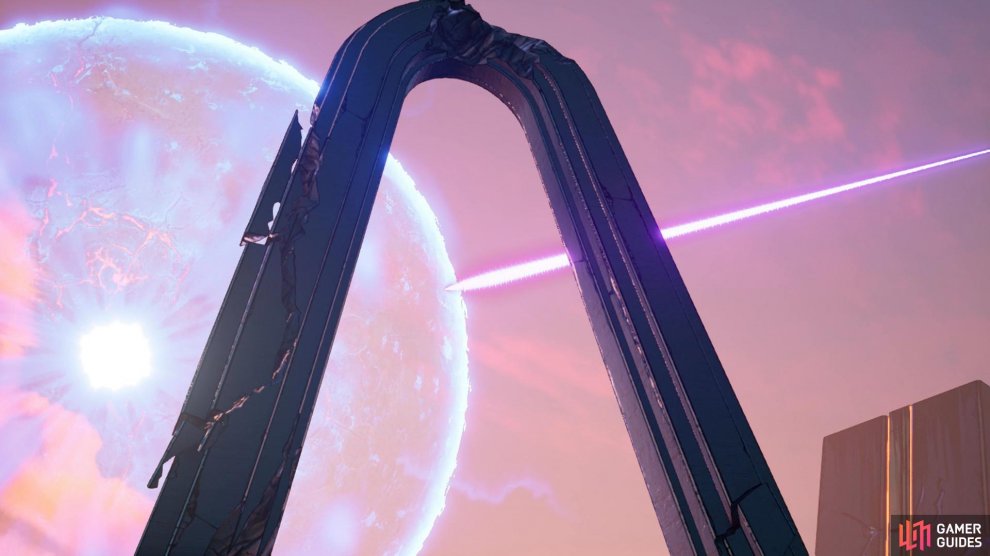 Return to Sanctuary, Say your goodbyes

Open your map and return to Sanctuary and make your way to the bridge to speak to Lilith and then rush to the window to take a look outside. With the way matters are unfolding, you won’t get another chance to take on the Calypsos so before speaking to Lilith a second time, head around Sanctuary and say your goodbyes to all of the important people there. Of particular note, Hammerlock will hand over an Epic Pistol and Moxxi who will advise you to use the slots, this will guarantee a weapon from it this one time.

Once you’re done with them all, speak to Lilith once more before making your way back to Roland’s Rest to meet up with Vaughn. Grab yourself a vehicle from the Catch-A-Ride and race back towards where the turrets were previously and take care of the COV to the west of them. Take the stairs up afterwards to meet with Tannis and watch as she alters the turrets, allowing you to enter the area ahead.

Drive to Cathedral of the Twin Gods, Follow Ava

This is another new Zone on Pandora, and the last major one which comes with a collection of Crew Challenges and Zone Completion tasks. The initial part of this area is a straight drive, follow the road north while keeping to the northeastern wall.

Note: While you can stick around and fight the COV here, it’s easier to simply drive past them and take out the ones that give chase.

Eventually, you’ll reach a small hill you can travel up (take out the two Rocket Towers first however) and at the top, you’ll locate the first Typhon Log. Drop down and search along the northwestern wall, near where the COV attack you, to find a garage you can crouch into. At the end of this cave, you’ll be able to mark the Eridian Writing on your map, something that will come into play shortly. 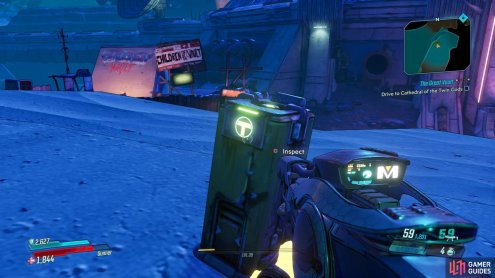 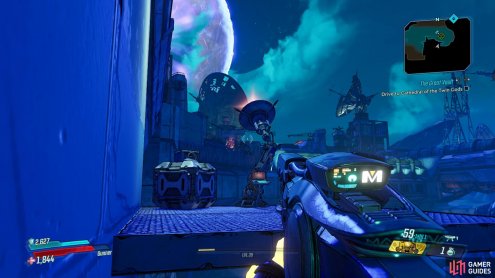 Exit this garage and continue to the east where you’ll spot a Catch-A-Ride. More importantly however, head onto the platform behind you to find some containers leading to a ladder. Continue on and then at the corner, turn to jump across the metal girders followed by jumping onto the pipe against the wall. Climb on to the top part of the pipe and then finally jump over to the platform with the Crimson Radio.

Drop back down and follow the road along until you reach the door just outside the cathedral. Before you follow Ava however, drop off to the northwest to find a hidden Typhon Log however beware of the Badass Goliath that climbs up the ledge nearby. When you’re ready to continue, head back up the ladder and shoot the explosive charge to gain entry.

You’ll encounter a large group of COV as you head inside but you’ll be aided by Atlas soldiers, Ava and more so it should be an even battle. The biggest threat here is the Badass Goliath, don’t give it the chance to evolve and the rest of the COV should be easy enough to take down. Once the area is clear, head along the southern wall to find a garage you can duck under. Follow the stairs and climb the ladder, at the end of the walkway you’ll find the third and final Typhon Log. In order to obtain your prize, head out of the Outer Sanctum and make your way back to where you found the first Typhon Log and you’ll spot a pipe with the Dead Drop inside. 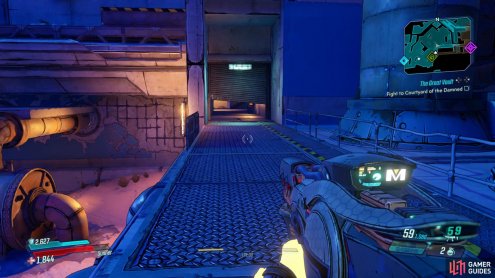 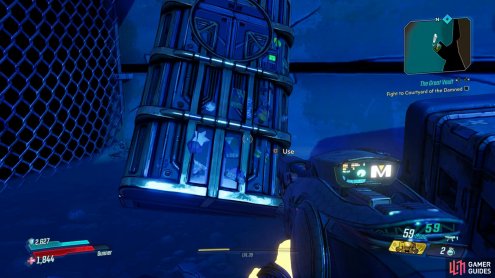 Fight to Courtyard of the Damned, Open sanctum door

Make your way back to the Outer Sanctum and continue to the west and through the pipe to encounter another large group of COV including a Badass Hag and a deadly Anointed Psycho. Wait until you encounter the Hag before using your Action Skill, the rest of the enemies should pose little threat.

Continue to the west, head under the shutter and then climb the crates to your immediate right. You’ll find a door boarded up here, melee it to gain access and follow it around to a Dead Claptrap on the wall and a Red Chest down the bottom. Return the way you came and follow the path to the west to take out another group of COV. 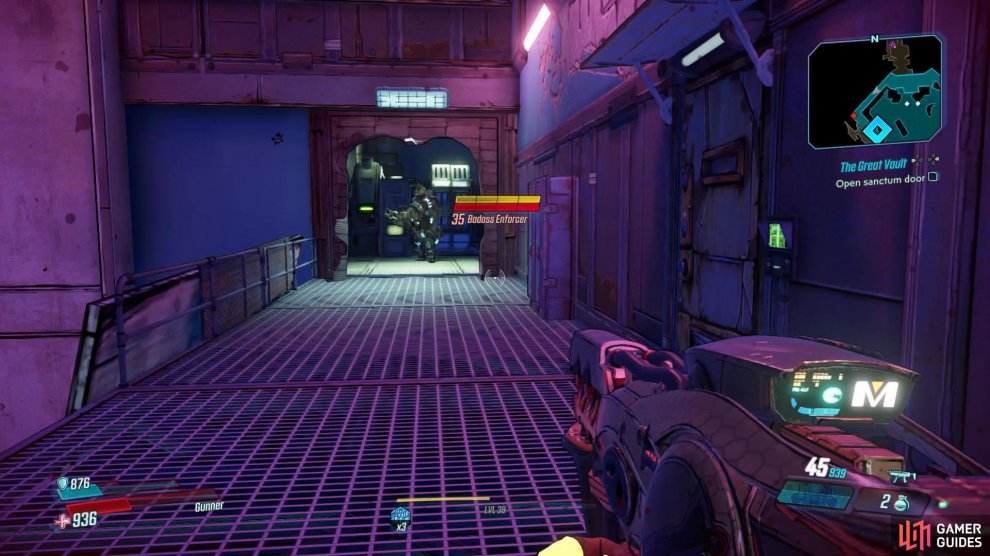 As you reach the Courtyard of the Damned, you’ll have to go up against yet another large group of COV, aided once again by Atlas soldiers. To begin with, take out the Dropship Turret on the right, followed by the COV in the two towers. After this, make your way around anticlockwise, taking out Hags and Bruisers as you go. Your last enemy will blast through the shutter at the end of the walkway, a Badass Enforcer, this is a great time to break out an Action Skill if it’s available. Head through the doorway here, take out the last few COV and then flip the switch to open the doors.

Deal with the COV that come flooding out and then proceed through to find a pair of Vending Machines you can make use of. As you pass through the doorway, you’ll need to take on some difficult Anointed. Rachel is flanked with extra COV but you’ll want to focus on burning her down as quickly as possible, if left to her own devices, she’ll deal massive damage to you. Her most lethal attack is her Eridium Laser, keep your distance and jump over it should you see it.

Once the enemies are dealt with, you’ll need to raise the processing tank’s pressure. The first two valves can be found on the ground and as soon as you turn them, two more Anointed will spawn. Follow the same tactics as before and try to focus on one at a time. Luke is the biggest challenge here, he has an Eridium shield which makes him immune when it’s out along with being able to spawn pools of fire, focus on taking Nathan down quickly so you can focus on Luke after. 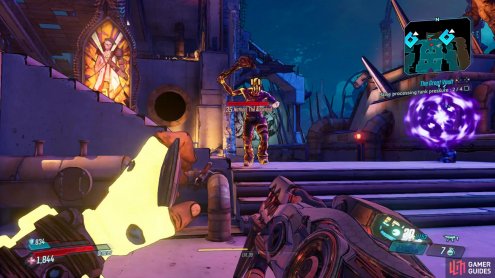 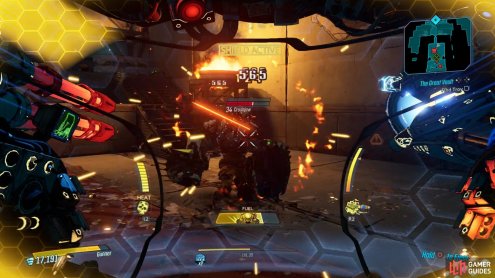 The final two valves can be found eitherside of the main altar by taking the stairs up and dispatching a few COV. Turn both valves and then return shoot the large fuel tank to drop the pipe and gain access to the manhole. As you drop into the Eridium Sluice however, ignore the entrance ahead and go behind yourself to find the Target of Opportunity, Crushjaw. This should be a relatively easy battle considering what you’ve had to deal with up to now and once he’s defeated, look to where he spawned to find another manhole to drop into, inside you’ll find the second Red Chest. After nabbing the loot, return the way you came and enter into The Great Vault. 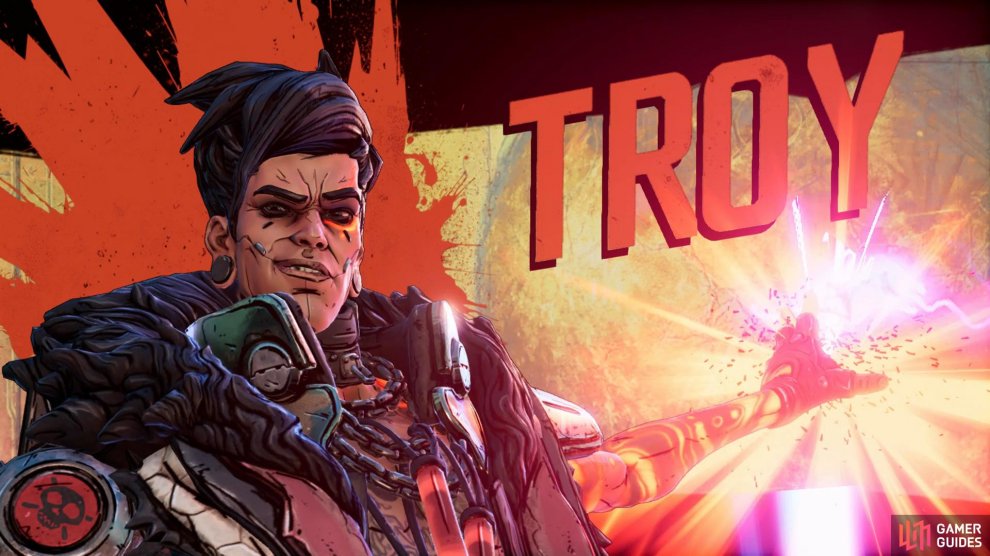 Head over to the ECHO device and listen to it before heading over to Lilith to cause the Vault to open. Inside you’ll find four Eridian Chests and then in the center, the Eridian Analyser. With this item, you can finally decipher all of the Eridian Writings you’ve encountered. Return to Tannis and speak to her to learn about your next task and complete the mission.

At this point, with the Analyser now in your possession, it’s a good time to head back around all of the Zones and decipher the Eridian Writings. Not only do they count towards completing a Zone, you’ll also unlock a Trophy/Achievement for deciphering every single one. On top of this, you’ll now be able to unlock the way to the Eridian Proving Grounds which are small Trials that make up the second part of Borderlands 3’s endgame. Although the missions count as Side Missions and go towards unlocking the Getting a Little on the Side Trophy/Achievement, it’s best to leave this until you finish the campaign as you’ll struggle to hit any of the optional objectives and receive the best rewards.