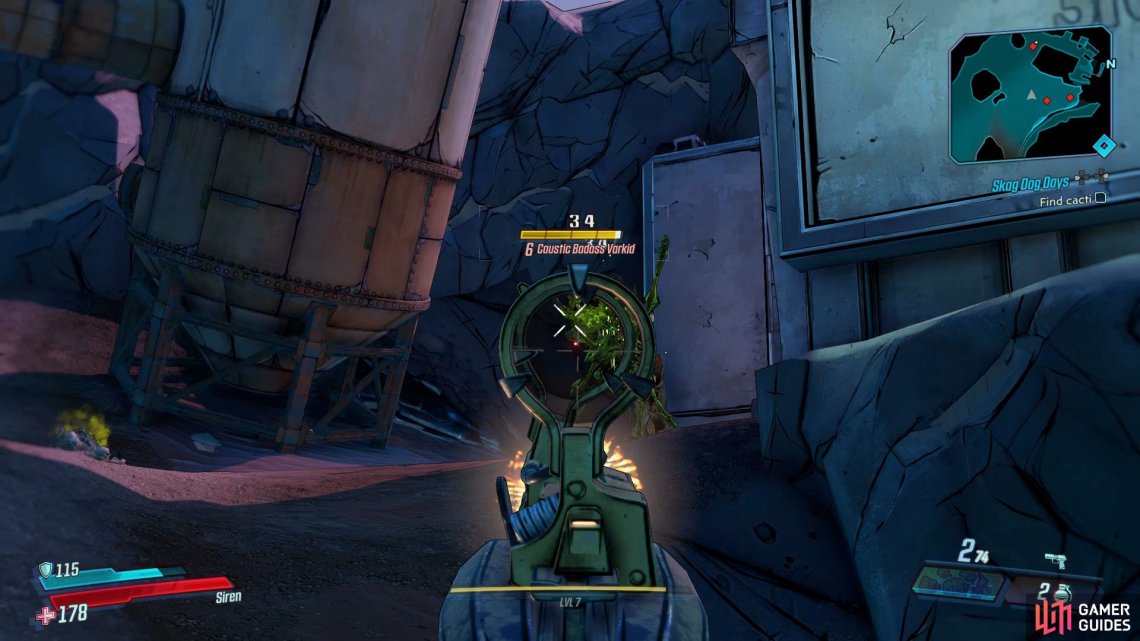 (1 of 2) You’ll need to take out the Caustic Badass Varkid to get past, 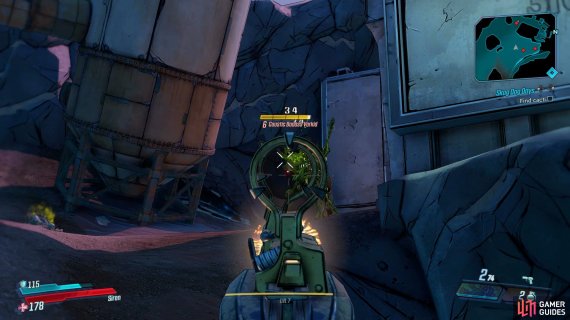 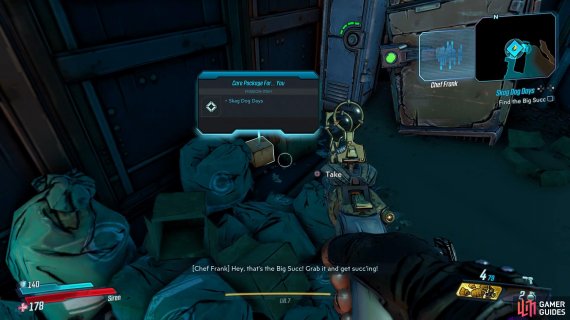 You’ll need to take out the Caustic Badass Varkid to get past, (left), after you’ve gotten past the Badass Varkid, head further in until you see a trailer where the Big Succ is located. (right)

To begin this Side Mission head over to the Bounty Board that’s conveniently located next to the The Droughts - Highway Fast Travel Point. After you’ve accepted the Mission head to the waypoint on the map. Once you’ve arrived, deal with the enemies in the area, and then head to the back of the area where a Caustic Badass Varkid will spawn. Keep your distance and take him out with caution, as his attacks can be very deadly.

After you’ve dealt with the Caustic Badass Varkid, make your way over to the trailer that’s located in the back right of the area and the Big Succ will be waiting for you. 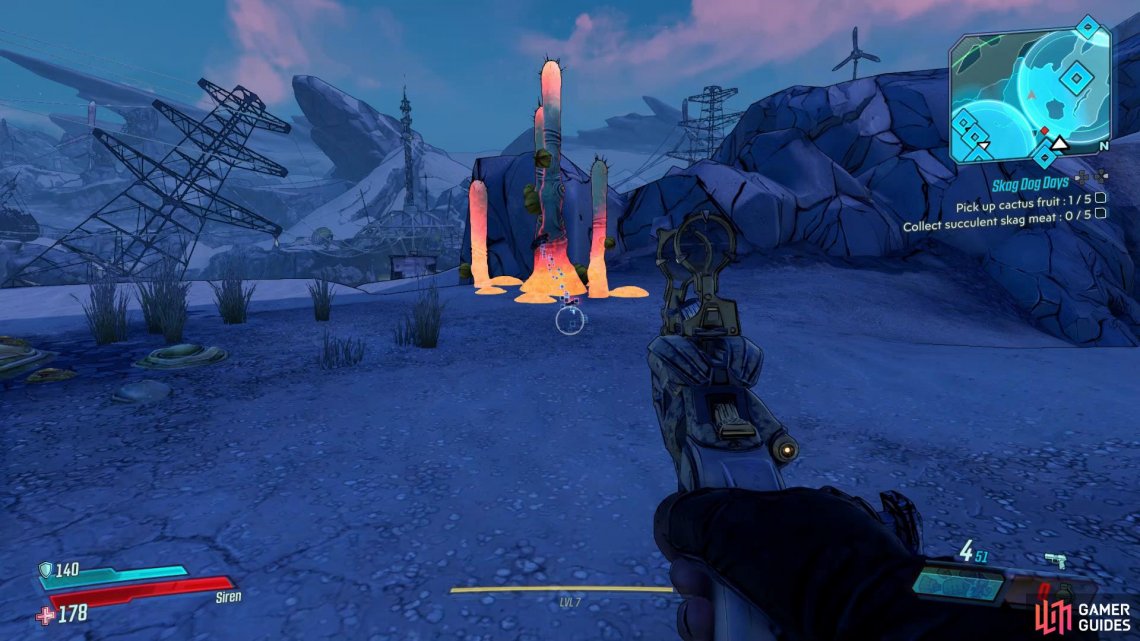 (1 of 4) Cactis that are able to be destroyed will have a red glow on them,

Now that you’ve got the Big Succ in your possession, head over to the new waypoint on the map where you’ll find the Cactis scattered around. In order to get the Cacti to drop it’s fruit, you’ll need to the use the Big Succ’s alternative fire mode, the Grenade Launcher.

Whilst you’re on your way around the desert getting the Cactus Fruits, Succulent Skag’s will try to bother you, take them out and they will drop their Succulent Skag Meat which is needed for the Optional Objective. 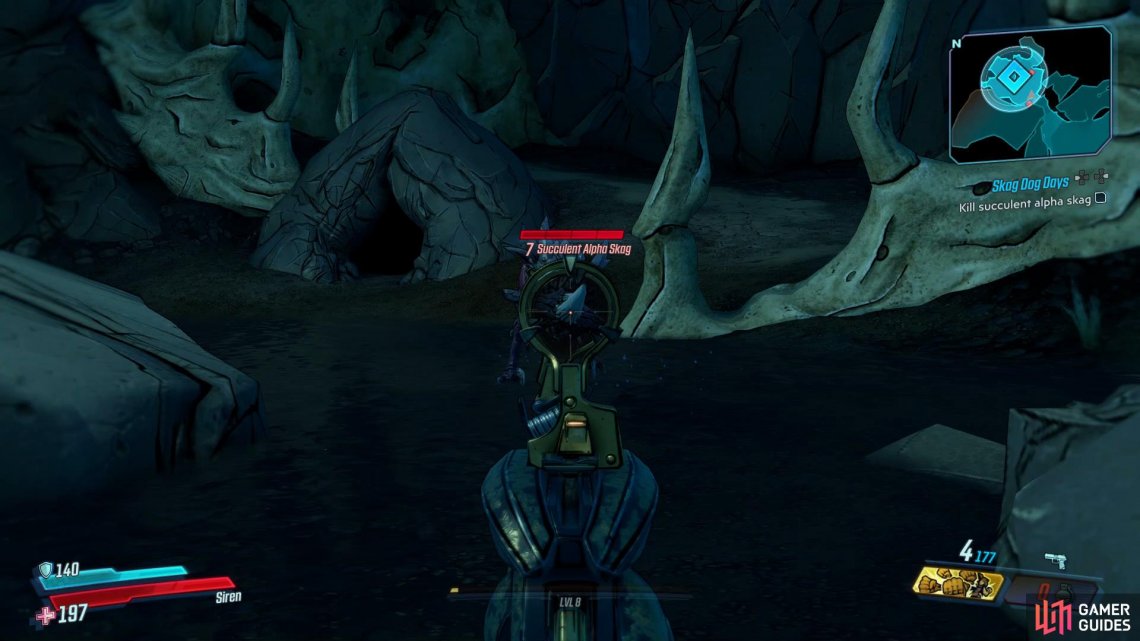 (1 of 2) You’ll be able to find the Succulent Alpha Skag hiding in a cave nearby, 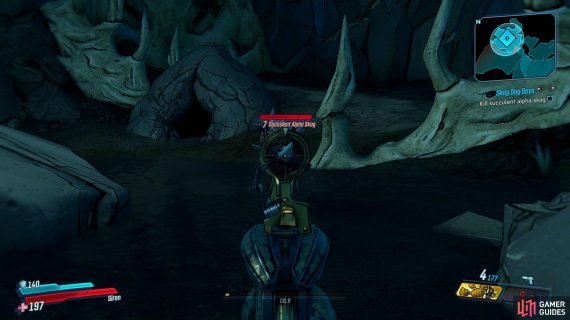 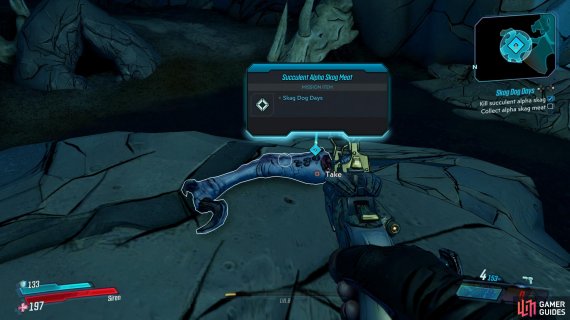 Before exiting the Cave and heading towards the next Objective, make sure you grab the White Chest that is sitting in the center. 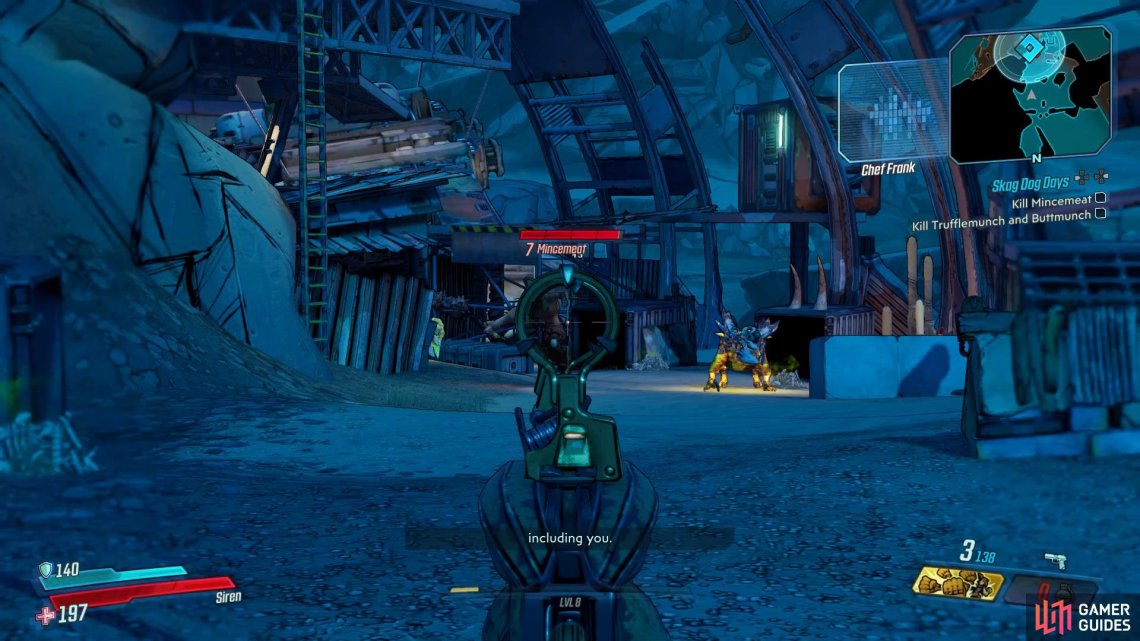 (1 of 2) You’ll find Mincemeat roaming around the camp with Trufflemunch and Buttmunch by his side, 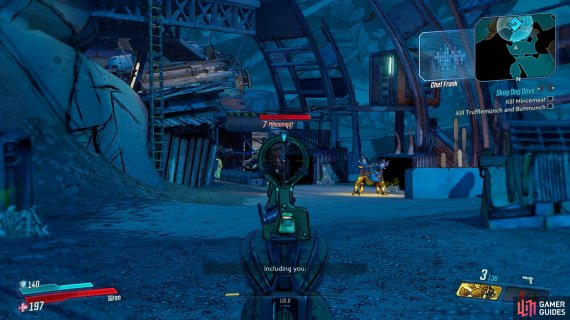 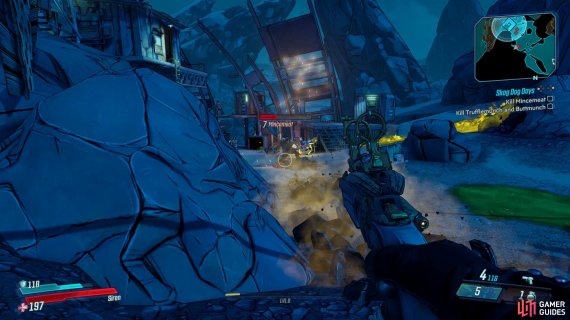 You’ll find Mincemeat roaming around the camp with Trufflemunch and Buttmunch by his side, (left), during your fight with Mincemeat he’ll do a ground slam which has a large AoE in front of him so be ready to dodge. (right)

Now that you’ve collected the Succulent Alpha Skag Meat, Chef Frank wants you to take out Mincemeat and his two companions Trufflemunch and Buttmunch. Head over to the waypoint on the map where you’ll find Mincemeat roaming around in the camp.

You’ll want to try and lure Mincemeat into a more open area as he has a couple of punishing attacks where you’ll need a lot of room to dodge out of the way.
:::

During your battle with Mincemeat he’ll slam his weapon into the ground which will cause a very large damaging line AoE to occur, so make sure you stay alert at all times becuase you’ll need to dodge this attack quickly. This isn’t the only attack you’re going to need to watch out for however, as he has two up close and personal attacks which are also very deadly.

Whilst you’re dodging his AoE attack and you’ve got Trufflemunch and Buttbunch on your tail, you’re going to need to keep a close eye on Mincemeat as he will sprint after you and go in for either a swipe or a spin attack which are both very painful. 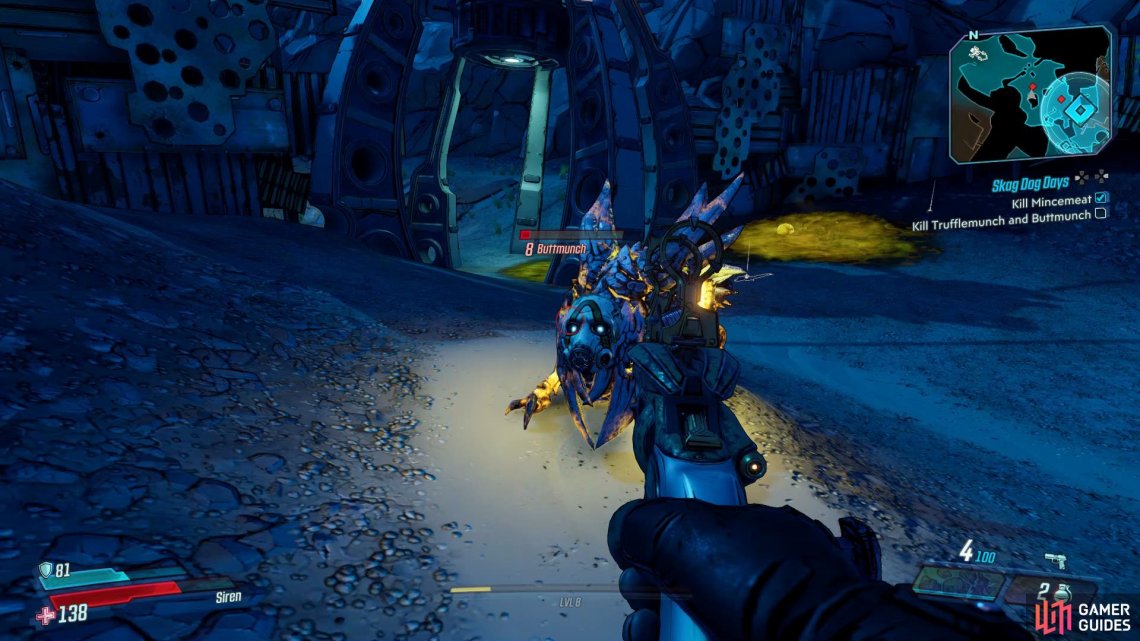 (1 of 2) Buttmunch comes equipped with a radioactive attack, 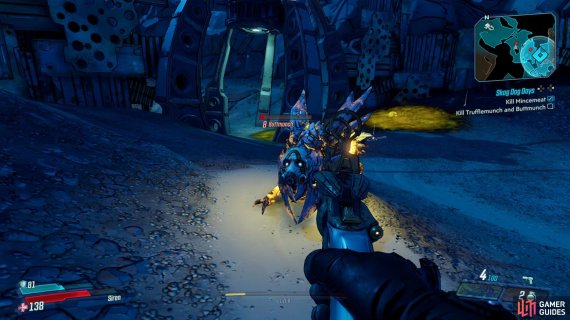 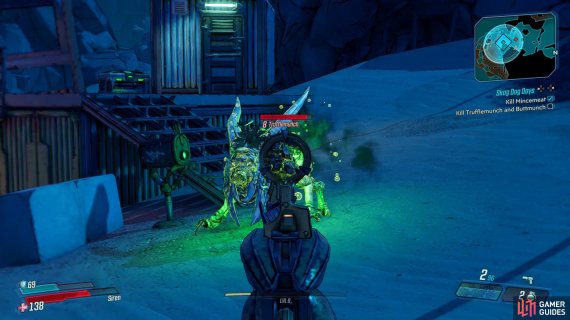 After Mincemeat has been slain, you’re going to need to deal with his pets. They aren’t too difficult to take down, but you need to be aware of their main attack, which is an elemental AoE. Buttmunch fires out radioactive puddles from his mouth and Trufflemunch does the same but with Corrosive instead.

Once you’ve taken out Mincemeat and his two pets, head over to the waypoint on the map and deliver the ingredients to complete the Side Mission. 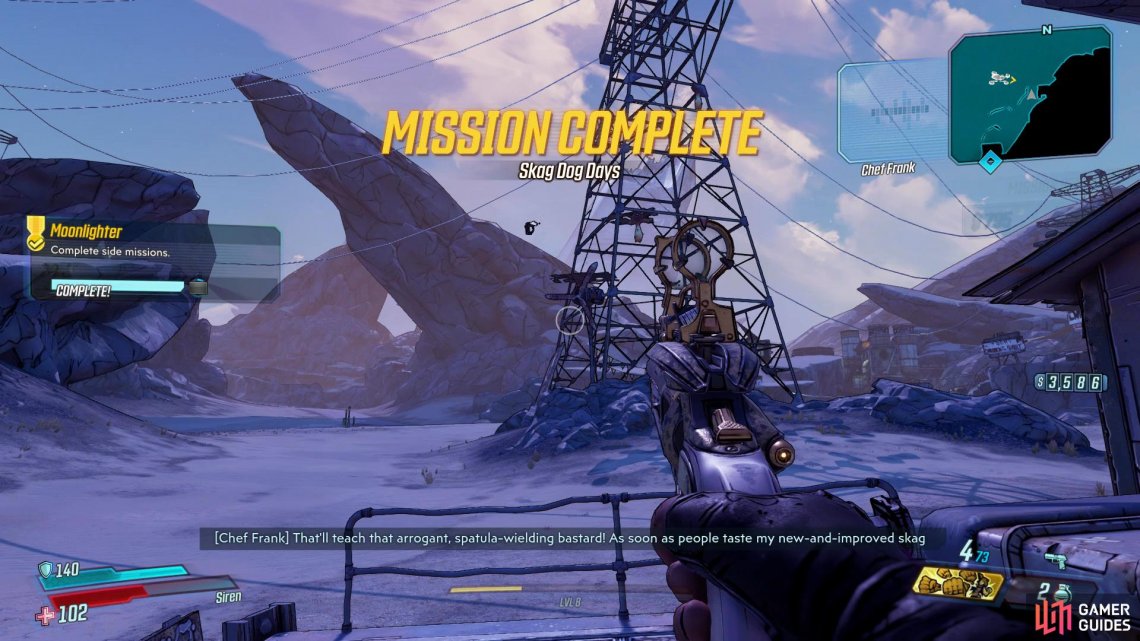