Begin by handing over the Vault Map you won back at The Holy Broadcast Center to discover that you’ll need to seek out Tannis if you’re to get the map working.

You’ll find the Eridian dig site to the northeast of Ellie’s Scrapyard and if you neglected to find it earlier, remember the Typhon Log in the Skag den to the right of the entrance. Once you’re all set, head through the small entranceway and speak to Tannis once she leaves her residence. Tannis will then allow you to loot the surrounding are while you await her analysis so head around the exterior of her residence looting anything and everything.

Defend Tannis and the map¶

Now the real action begins as the Calypso Twins send more of their loyal followers your way. They’ll start by coming from the north of you and contain the same COV enemies you’ve fought up to this point. Stay close to Tannis to prevent her from getting attacked but make use of the cover around the area, don’t stand in the middle blindly firing. 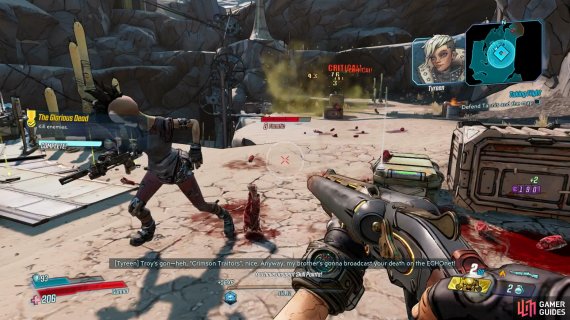 The enemies will attack from the COVs to begin with (left), the battle becomes a lot easier once Lilith joins the fray. (right)

Once you take out the inital wave, Lilith will make her way to you and you’ll have to defend Tanis from all directions. Make good use of your radar here to spot where the enemies are attacking from and use your Action Skill on cooldown, until Lilith gets there, you’ll be up against it. Once Lilith does arrive however, it’ll become a lot easier, even if the amount of enemies you face increases, Lilith is incredibly powerful and will kill them with ease. Once the battle is over, Tannis will examine the map that will direct you to another planet, Promethea.

Although you can’t decipher them for now, you can locate some Eridian Writing in the cave below Tannis’ residence. This is needed for Zone Completion and you’ll have to return here much later but there’s no harm on marking your map now.

Head to ship in Raiders’ Drydock¶

Lilith and Tannis has gone on ahead so leave the Eridian dig site after looting the area and make your way northwest to Raider’s Drydock to catch up with your fellow Crimson Raiders members. While Lilith goes to round up the rest of your comrades, Ellie has a task for you involving her Biofuel Rig however before you jump in, look to the left of Ellie to spot an Echo Log.

The next task is rather simple, the Biofuel Rig is a beast of a vehicle and you’ll be able to mow down anything with ease. Head out of the Raider’s Drydock to the west and you’ll find plenty of COVs and Skags you can squash underneath your new Rig. The waypoints will lead you to clusters of enemies but you’ll find the COVs and Skags make for the easiest targets. 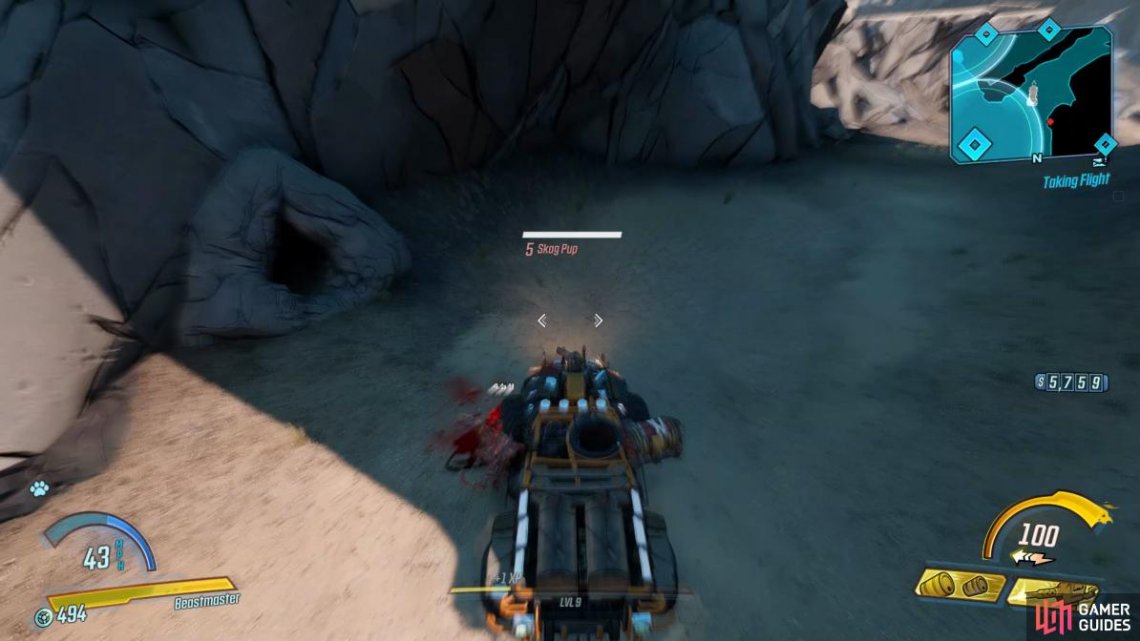 Skags are the easiest targets for your Biofuel Rig.

Just one more task remains before you can jet off and you’ll find what you’re looking for by heading to the far northwest corner of the map. You’ll notice that you won’t be able to reach the area you’re looking for here in Dahl Orbital Control howver if you follow the wall down to the west, you’ll spot a cave. Leave the Biofuel Rig outside and head in to find some stairs leading up.

The area may seem void of all life as you enter through the cave but you’ll notice the pieces of cover and barrels all over the place that tells you it won’t remain that way for long. As luck might have it, as you approach the Astronav Chip, a large group of COVs will attack you. You know the drill by now, make use of cover should you need it and you’ll find an electrical raditor in the center along with barrels all over the place. Once the last enemy falls, grab the Astronav Chip and take out any more COVs that may be foolish enough to attemp to kill you. 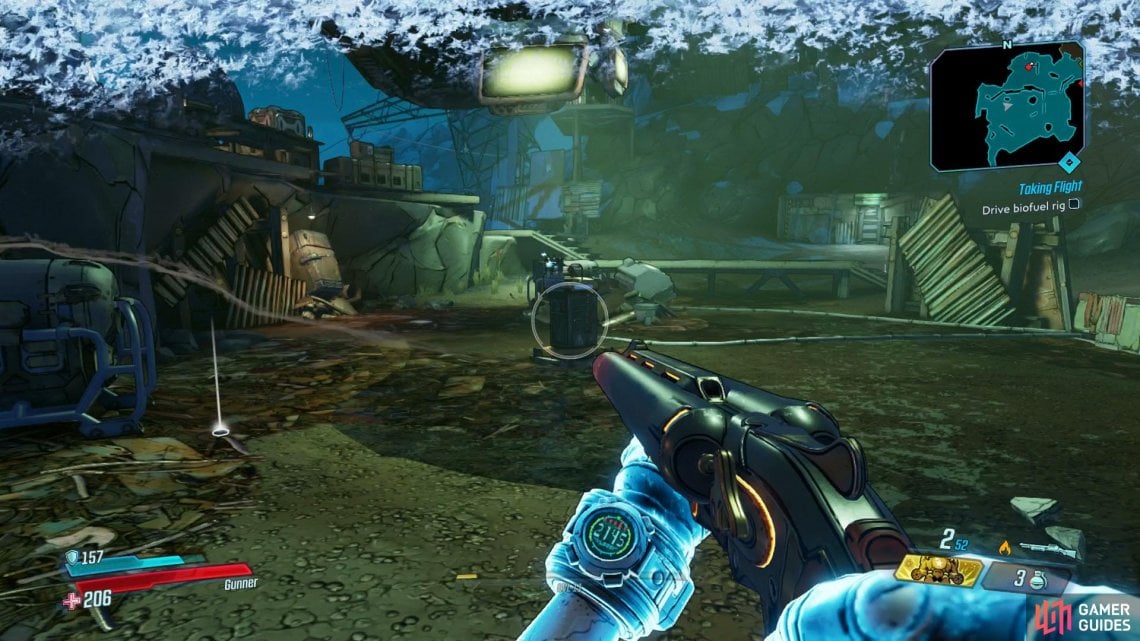 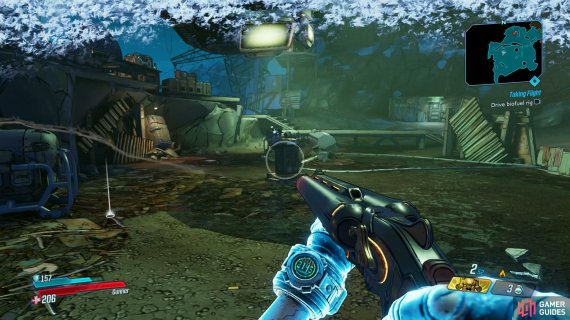 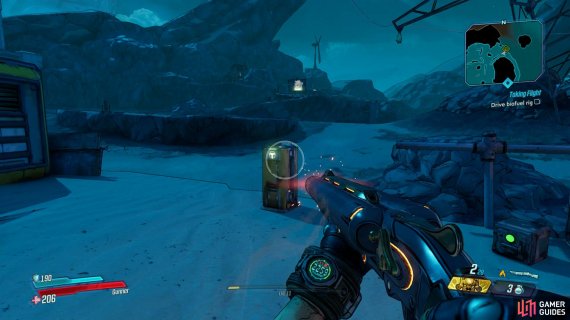 Make use of the hazards against the enemies here (left), don’t forget the Typhon Log while before you go. (right)

Before you leave the area however, exit out to the cliffs to your northeast and you’ll spot another Typhon Log which will most likely be your third and final one, unlocking the Dead Drop west of your location where you found the Big Succ as part of the Skag Dog Days Side Mission. Finally, while you’re up here, head right of this Log to find a White Chest and an easy route back to the Biofuel Rig. Regardless of if you decide to grab the Dead Drop now or later, make your way back to Ellie to deliver the Biofuel and Astronav Chip. With that simple task handled, head forward to meet up with Lilith.

Fight to Raider’s Drydock via catwalks¶

You didn’t think the Calypso Twins would let you leave so easily, did you? With Lilith out of action, you’ll have to head behind yourself and up towards the catwalks if you’re going to reach her in time. You’ll have to dispatch a few COVs along the way to the elevator but that’s nothing you can’t handle at this point. It’s a straight shot to the Drydocks but you’ll have a lot more COVs that attempt to stop you along the way. Regardless of how dire it may sound, you’re not on a timer here so take the time to recover your shields should you need it. Once you reach the end, drop down to the bottom, bust open the containers for some ammo and then head out to Lilith’s aid. 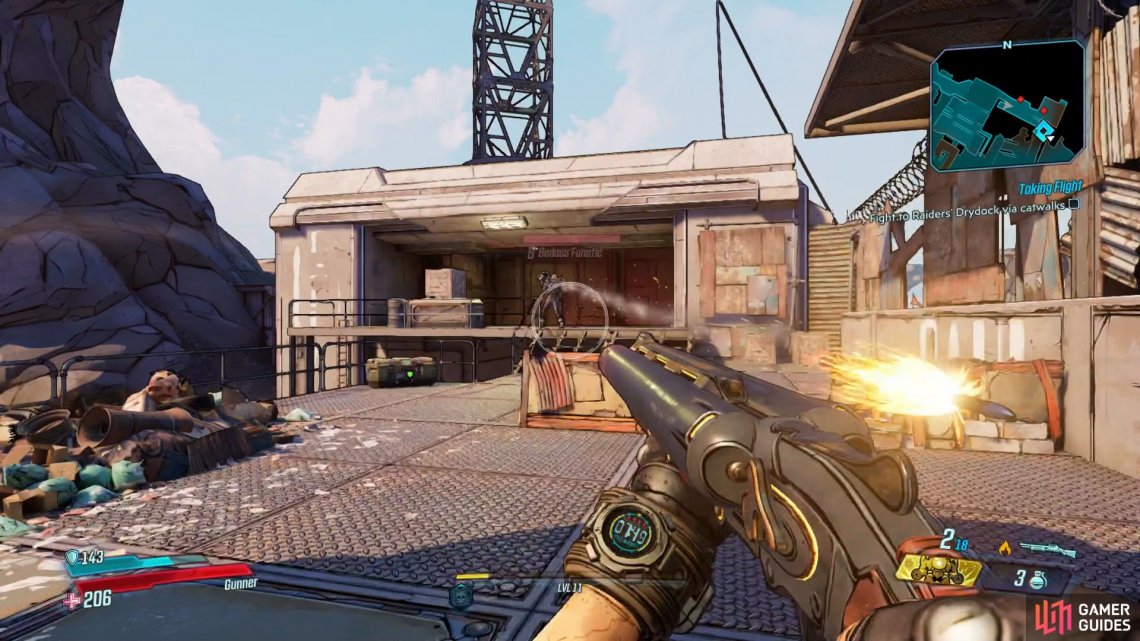 Beware of the Rocket Launcher wielding Badass at the end of the catwalks.

You’ll be in a large open area now as you have to fend off the COVs that are attacking Lilith so be sure to make use of any cover you can find here. You won’t be fighting any new enemies however, you’ve fought this group of enemies plenty of times so you should be more than fine, so long as you take care of any Badass types that may spawn during the firefight. 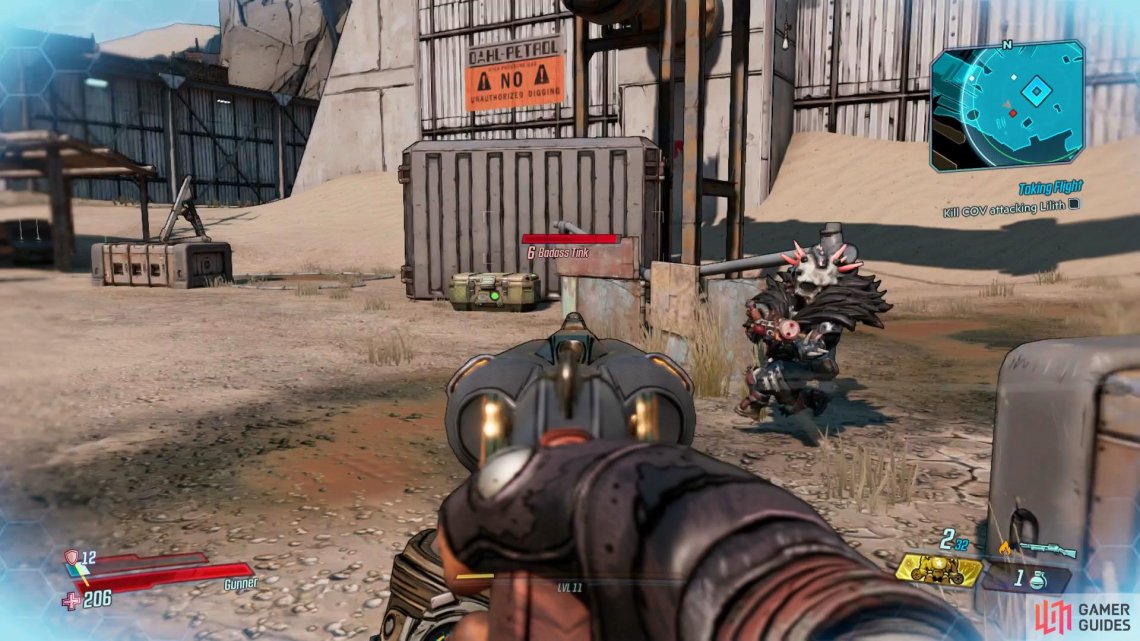 Focus on any Badass that spawn during the firefight at the end.

Once they’re taken care of, head over to Revive Lilith and then head over to Ellie to complete the mission. As part of your reward you’ll obtain the unique Epic Pistol, The Leech and a new Weapon Slot is unlocked giving your new possibilities in combat and unlock So Long, Pandora!.