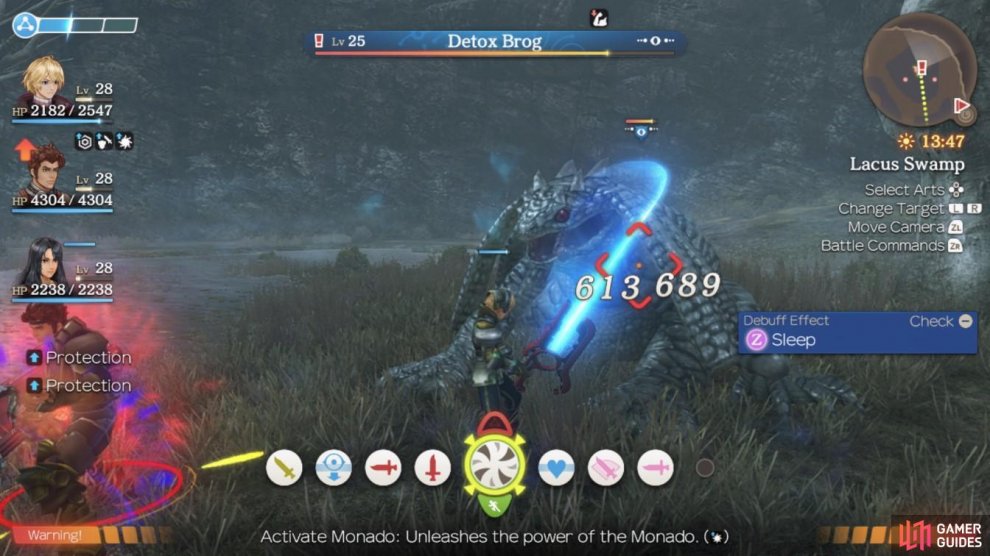 Upon entering Satorl Marsh, you'll come across the Nopon Merchant Camp landmark, where you will find Bokoko and other non-unique Merchant NPCs. He will ask you to find the scholar, Kacha, who was carried off by Ignas. Head to Exile Fortress to save Kacha. There are two ways you can save Kacha.

This quest must be completed to unlock Kacha's quest, The Giants' Key and Bokoko's quest, Making Camp.

Upon completing Kacha's Kidnapping, Bokoko asks you to help gather materials to make a bed for his new camp because he is too ill to get the items himself.

Once you have collected all the items, head back to Nopon Merchant Camp and speak to Bokoko again to complete the quest.

Upon rescuing Kacha and completing Kacha's Kidnapping, Kacha will ask you to defeat 5 Deluded Ignas to stop them from getting their hands on the treasure of the Giants. You'll find the Deluded Ignas on an upper level near the Dark Swamp and you can get to it by walking down southeast from Exile Fortress. Once you have defeated the Ignas, you can head to the edge of the plateau and dig up the Giants' Key. You can use the Giants' Key to open a secret door in Exile Fortress. You can use the rear entrance or the main entrance of the fortress and then head to the wall behind the throne. When you examine it, it will be called the Wall of Sin. When examined, it will reveal a secret tunnel to the roof of the fortress. When you reach the roof, head over to the Altar and examine it. It will tell you that you need to offer something to the altar. Once you've examined it, head back to Kacha to complete the quest. 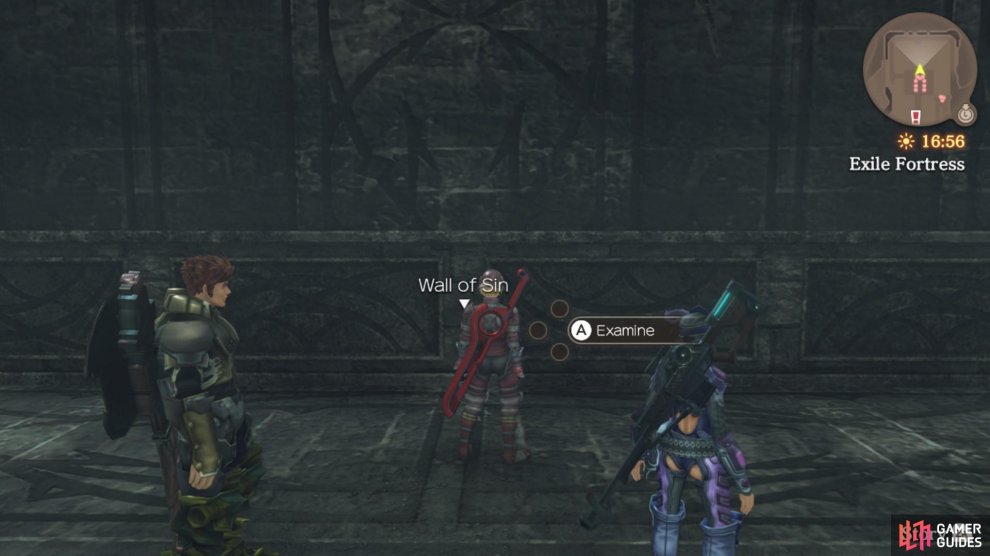 This quest must be completed in order to unlock Kacha's second quest, The Giants' Treasure.

Once you have completed The Giants' Key, Kacha will ask you to retrieve the Giants' Mirror. You will find the Mirror nearby Daksha Shrine on the Bionis' Leg. Be careful around Daksha Shrine, as the Unique monster, Clifftop Bayern lives there and will attack on sight. You do not have to fight it to get the Mirror though. Once retrieved, head to Exile Fortress to offer the Mirror on the altar. When you place the Mirror on the altar, you will receive the item Daring of Giants. Once you've accepted the treasure, 3 quest-exclusive level 32 spiders called Deified Queens will appear. This is quite a tough fight but you don't actually have to defeat them to complete the quest. So whether you defeat the enemies or run away, head back to Kacha once you have the treasure to complete the quest. She will also let you keep the Daring of the Giants and hints you may need it in the future.

You can find Zazadan in a small, elevated cave just north of the Glowing Obelisk Landmark in Satorl Marsh. He tells you he is very hungry and asks you to retrieve 2 Twin Flamii Eggs and 5 Lemon Stones. Lemon Stones are collectables found across Satorl Marsh, and Twin Flamii Eggs are dropped by Flamii. Lacus Flamii near the Alter of Fate drop Twin Flamii Eggs, but it is an uncommon drop. The Lacus Flamii also only appears when there is no fog. Once you've found the items, return to Zazadan to complete the quest.

This quest must be completed in order to unlock Zazadan's second quest, Zazadan in Danger

After completing Preventing Starvation, Zazadan will ask you to defeat the monsters outside his cave. He asks you to kill 8 Ogre Bunnias around the Glowing Obelisk landmark. Once you've defeated all of the Ogre Bunnias, return to Zazadan to complete the quest.

This quest must be completed in order to unlock Zazadan's third quest, Zazadan Still in Danger.

After completing Zazadan in Danger, Zazadan announces that he is still in danger of being eaten by monsters in Satorl Marsh. He asks you to defeat the Unique monster, Sunlight Schvaik, who is a level 30 Rhogul-type monster flying around Barren Moor. Once you've defeated the enemy, return to Zazadan to complete the quest. 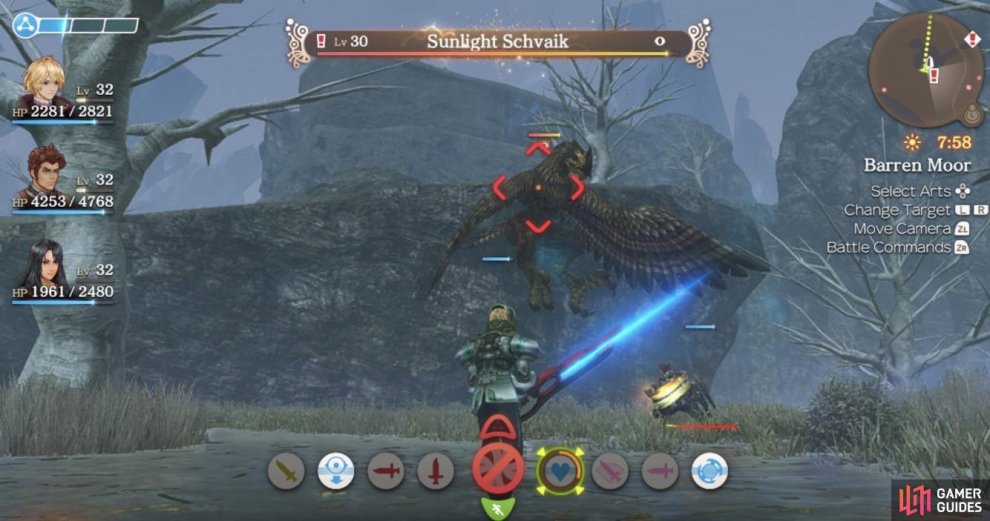 This quest must be completed in order to unlock Zazadan's fourth quest, It's All in the Mind

It's All in the Mind

Zazadan is no longer in danger but he now feels too ill to travel. He asks you to fetch some Nopon Potion from a cave near Lacus Swamp. The cave is just south of Nopon Merchant Camp. Once you've picked up the Nopon Potion, head back to Zazadan to complete the quest.

This quest must be completed in order to unlock Zazadan's fifth quest, A Mysterious Delicacy.

After you have helped Zazadan out so many times, he decides to thank you by giving you a Red Pollen Orb. He believes something amazing will happen if you dip the orb into the Shining Pond. The Shining Pond is a Secret Area up a hill south of the Dark Swamp. There are lots of enemies in the Dark Swamp, and you will also need to traverse through the poisonous waters to get to the path that leads to the Shining Pond. This will lead you to taking poison damage every few seconds whilst you're in the water. Luckily, once you have found the Shining Pond, it will become a landmark that you can fast travel to on the map, so you won't need to damage yourself by swimming through the poisonous waters every time you wish to go there.

When you place dip the Red Pollen Orb into the Shining Pond, Highmore Caviar will appear. Return to Zazadan to complete the quest and he will tell you that you just don't understand how delicious the caviar is. He suggests that he should have the caviar, it looks like you might have been tricked into running another errand for Zazadan. 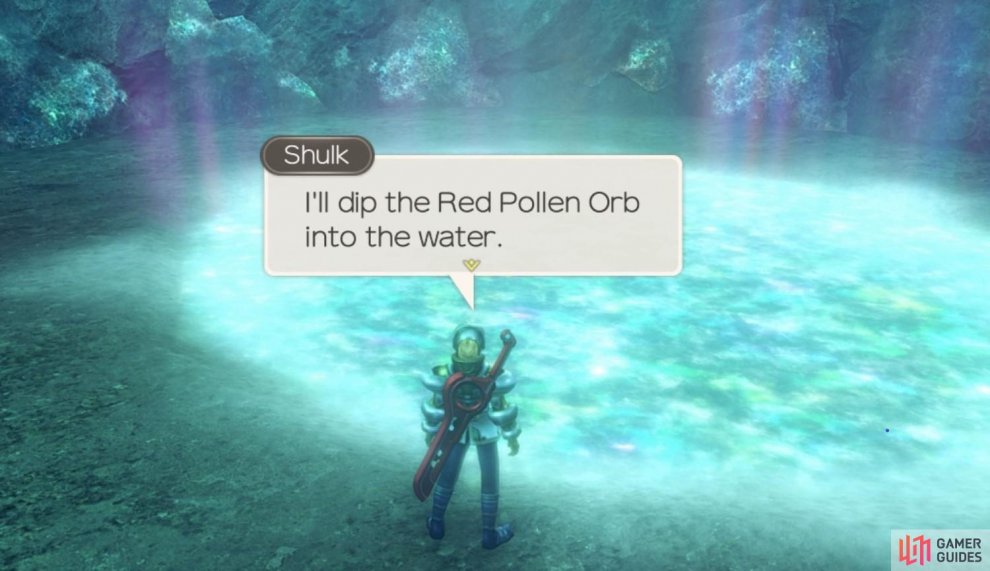 This quest must be completed in order to unlock Zazadan's sixth quest, A Gift?

You need to have progressed to Frontier Village during the Main Story quest to complete this side quest.

Upon completing A Mysterious Delicacy, Zazadan will ask you to take the Highmore Caviar to a Nopon called Debadeba. Debadeba can be found in Frontier Village, so you may have to wait until you have progressed to Frontier Village through the Main Story quest to complete this quest. You will find Debadeba on the second floor, Orb Storage Level (active hours 18:00 - 06:00). Once you speak to Debadeba and hand him the Caviar, the quest is complete.